Every invention starts with an idea 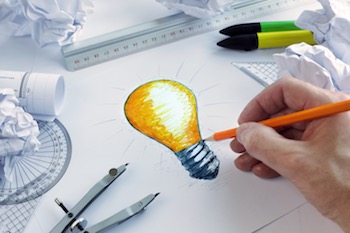 Independent inventors frequently ask me the same or similar question — How much information do I have to include in a patent application?  Sometimes this question is prefaced by something like— I have the concept but I am no scientist and I do not know how to actually create the invention.  Other times still it will be— I have this great idea, what do I do?

The first thing to understand is that to be an inventor you need to have an invention, which means you need more than an idea.  I realize that flashy advertisements will sometimes lead people to think that they are an inventor when they have come up with an idea, and that vast riches will be bestowed for sharing the idea with the right person. But stop and think about it for a minute. If it were that easy why wouldn’t everyone be a rich inventor?

The truth is you cannot patent or protect an idea or a concept.  However, it is also an undeniable truth that all inventions start with an idea, but an idea is not something that can be protected by any form of intellectual property protection.  Said another way, you simply cannot patent an idea or concept.  Similarly, you cannot copyright or trademark an idea or concept. So what do you do when you have an idea? How much is required in order to have an invention?

In order to be an inventor the law requires that you contribute to the conception of at least a single patent claim in a patent application.  This is one of the many places in patent law where the terms used complicate understanding.  The “conception” spoken of in the requirement mentioned above is not merely an idea, but rather it is much more.  The patent laws require that in order for someone to be an inventor they need to “dominate” the invention by exercising complete mental control over the subject matter of the invention, from creation through testing.  Thus, the patent laws do make a distinction between what we would consider an idea or concept as those terms are used in everyday language and “conception,” which is a term of art that has a specific legal definition.

So in order to be an inventor you must not only have the idea, but also you need to have the know-how with respect to bring the invention into being.  Another unique twist is that you do not actually have to bring the invention into being, others can do that, but they must be acting on your directions and under your supervision.  This is how the leader of a laboratory who does not actually do the testing winds up being the inventor.  He or she will have the idea and then explain to those under them in the lab hierarchy what needs to be done.  They will also be present to answer any questions that come up and provide additional direction as required. If the lab technician is merely following instructions they are not an inventor themselves; they are what the law refers to as a “reducer to practice.”

So what if you have a great idea and you don’t know what to do?  It is very difficult, if not impossible, to make any progress if all you have is the idea and no ability to move forward.  That means that the first thing you need to do is embark on research to figure out as much as you can about the problem you are trying to solve and what will be required to solve that problem.  Learn as much as you can, tinker, sketch, read, because if you can describe your idea with enough detail you will cross what I refer to as the idea/invention boundary. Essentially, an idea is just a thought and an invention is the “meat on the bones,” so to speak. As you develop an idea more and more by adding detail after detail you are marching forward from having a “mere idea” that cannot be protected and toward an invention that can be protected. With an invention the devil really is in the details.

Take for example the image at the top of this article. You notice a sketch of a light bulb, which is nearly complete and colored in. You can tell what the image is, and when you started reading this article you probably never gave it a second thought. But at some point in time the page was blank. Little by little the person drawing the image filled in the details, line by line, step by step. At some point in the process an observer would start to realize what is being drawn. It is at that moment that you have an identifiable light bulb, even before the sketch is complete and even before the coloring is added. Inventing is the same way. You do not need to be finished with the project in order to have something that could be a protectable invention. To analogize to the invention process, it is at that moment when the image first comes into focus that you would have crossed over from having only a mere idea to having an invention. Sure, much more detail could be added, but enough has been added to present a concrete and tangible understanding to an observer. Thus, just as with drawing, inventing is a step by step process. As you add each additional detail you little by little create an invention.

Ultimately, you may get to a point where you just cannot go any further and need some additional help from an engineer, scientist or your friend next door, to move the project forward. If you are at a point where you need help to move forward you should write up as much as you can about your invention.  The patent laws require that in order to file a patent application you need to be able to describe in writing how others could both make and use the invention, with the same level of detail as would be required in an instruction manual.  So write up as much as you can and then file a provisional patent application.  Then you can move forward knowing that you have some documentation to demonstrate you were the creator of the invention. For more information about provisional patent applications please see:

If you are interested in trying to file your own provisional patent application, or at least looking for a way to put your thoughts into a workable context so you can share them with a patent attorney or patent agent, consider trying the Invent + Patent System.

Once you have done as much as you possibly can on your own you might want to consider hiring an engineering firm to provide additional information and input to put your invention over the top.  The thing to remember is that if the person or firm you hire provides information that relates to the conception of the invention they will be considered a co-inventor.  As a co-inventor they have rights to the patent.  In order to get the help you do not want to give up rights to your invention.  You will want to have a written agreement in place that will allow you to keep ownership of the patent rights if you seek assistance from someone else, whether they are a professional or not.  You should also have a confidentiality agreement in place, unless you are speaking with an attorney or a patent agent, in which case a confidentiality agreement is unnecessary because it is already legally mandated.  We have some free sample confidentiality agreements you can use as you see fit.

If you do seek the assistance of another with your invention it is always wise to have a written agreement that indicates what your agreement is up front, including that anything they do provide will be owned by you, even if they must legally be identified as an inventor on a patent application.  Having an agreement in place upfront will save you all kinds of headaches down the road.  Frequently people don’t want to ask for an agreement or spell out the relationship in advance, which I suppose is human nature because it happens so frequently.  What I can tell you with near absolute certainty is that everything will proceed fine until money is involved, whether that is money being spent or money coming in.  Once money is involved people have a funny way of changing and behaving differently, even greedy.  So resist the temptation to jump right in before agreements are in place that protect you, protect the invention rights and define the relationship between and among collaborators.

Why is having an agreement so important?  Absent an agreement co-inventors will own 100% rights to the invention.  So your co-inventor can do whatever they want and you cannot stop them.  If they make money you don’t even have the right to seek a portion of what they make because they own the whole thing, the same as you, at least in the eyes of the law.  So it is absolutely critical that as you proceed from idea to invention that you have appropriate agreements in place to ensure continued cooperation by anyone who might be an inventor and need to be named on a patent application.  It is likewise critical to have the business end of things tied up tight so as to not create a messy problem later on.  Those messy problems only provide a distraction, get you mired down in things not related to success, take your eye off the ball and worst of all can cost real money to resolve if lawyers need to get involved.

For more information on patent and inventing basics please see these other IPWatchdog.com articles: