“Petitioning to overcome an improper final Office action is, contrary to conventional wisdom, not necessarily a futile exercise. Applicants can and do obtain granted petitions in far faster time than indicated in the USPTO Data Visualization Center.” 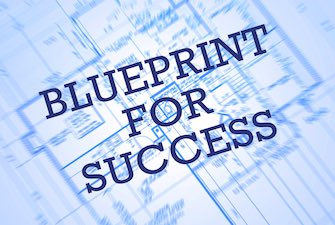 While researching the U.S. Patent and Trademark Office’s (USPTO) treatment of final Office actions for previous articles (Part I, Part II, Part III and Part IV), we noted, all too often, applicants acquiesce to premature or improper final Office actions rather than engage in a petition process they consider uncertain. Anecdotally, patent practitioners are often reluctant to challenge an examiner on petition without a clear understanding of the likelihood of success. Here in Part V, we research successful after final petitions: ones properly processed by the USPTO and promptly granted. We found, in many instances, favorable petition decisions are followed by a Notice of Allowance. What characteristics do these successful outcomes have in common?

Finding Shallows in a Deep River

When facing a decision to file a petition or not, applicants often desire petition statistics to help estimate their own likelihood of success. Table 1 provides pendency data (calendar days from petition filing date to decision mail date) and grant rates for 2018-2021 of petitions related to premature final rejection, obtained from the USPTO Data Visualization Center. 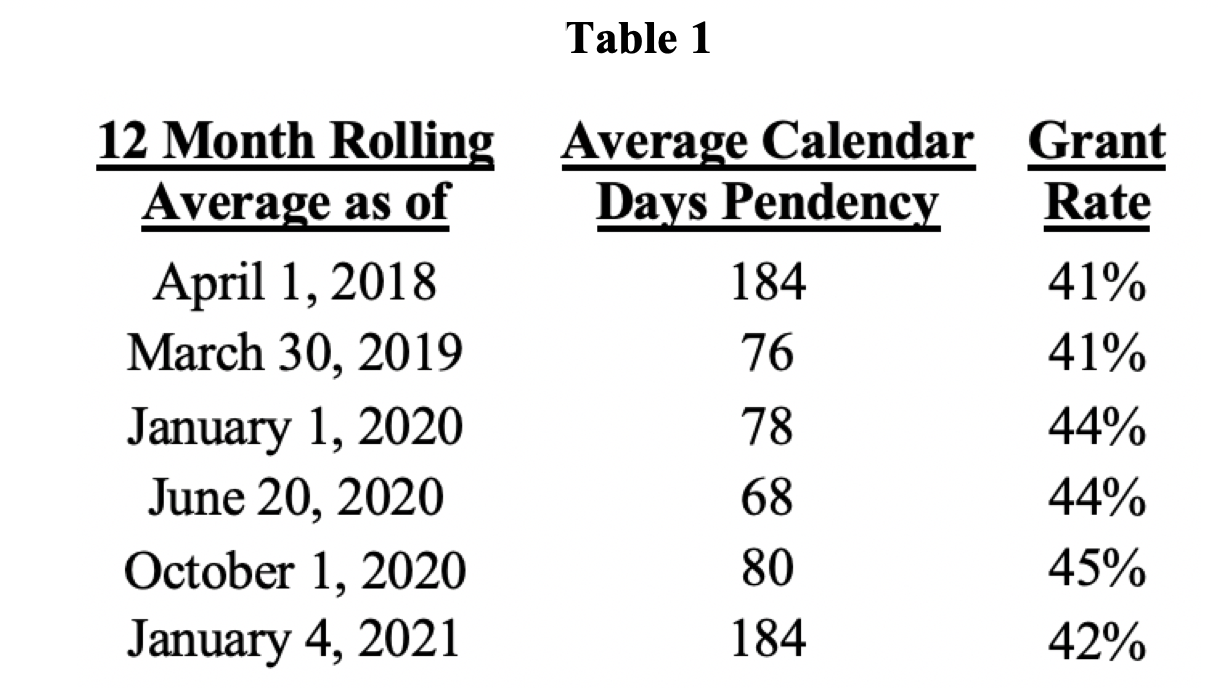 For the purposes of this article, we assume the USPTO’s current petition pendency information is accurate and, as of January 4, 2021, 42% of after final petitions are granted within an average of 184 days. We note significant delays in petitions processed between October 1, 2020 and January 4, 2021, which increased the annual rolling average from 80 days to 184 days.

In Part IV, we discovered late entry of an after final petition, either by design or happenstance, strongly correlates with the petition being further delayed and, ultimately, being dismissed as moot. These improperly processed decisions deflated the grant rates and increased the pendency averages. We also uncovered USPTO’s Patent Application Information Retrieval (PAIR) transaction history data entry errors which skewed the purported average petition pendency downward. Balancing the USPTO’s pendency data with our discovery of 25 petitions dismissed as moot in an average of 132 days (Part IV, Table 6), simple math indicates some petitions must be processed far faster than average. In fact, we found 65% of the petitions entered within four days of filing are granted, on average, in 33 days. (Part IV)

A search query of the Petition.ai database using the newly added Petition Type filter – Prematureness of Final Rejection – and filters for decisions granted in 2018-2020, easily identifies many rapidly decided petitions. The queried decisions were then reviewed to identify quickly granted petitions in one representative Technology Center (TC) from each of the Chemical, Electrical and Mechanical areas. We coded six petitions from the Chemical TC1600 as 16A-16F, six petitions in Electrical TC2400 as 24A-24F and six petitions from the Mechanical TC3700 as 37A-37F.  We reviewed the electronic files to determine petition pendency, applicant’s representative and application status. See Table 2. 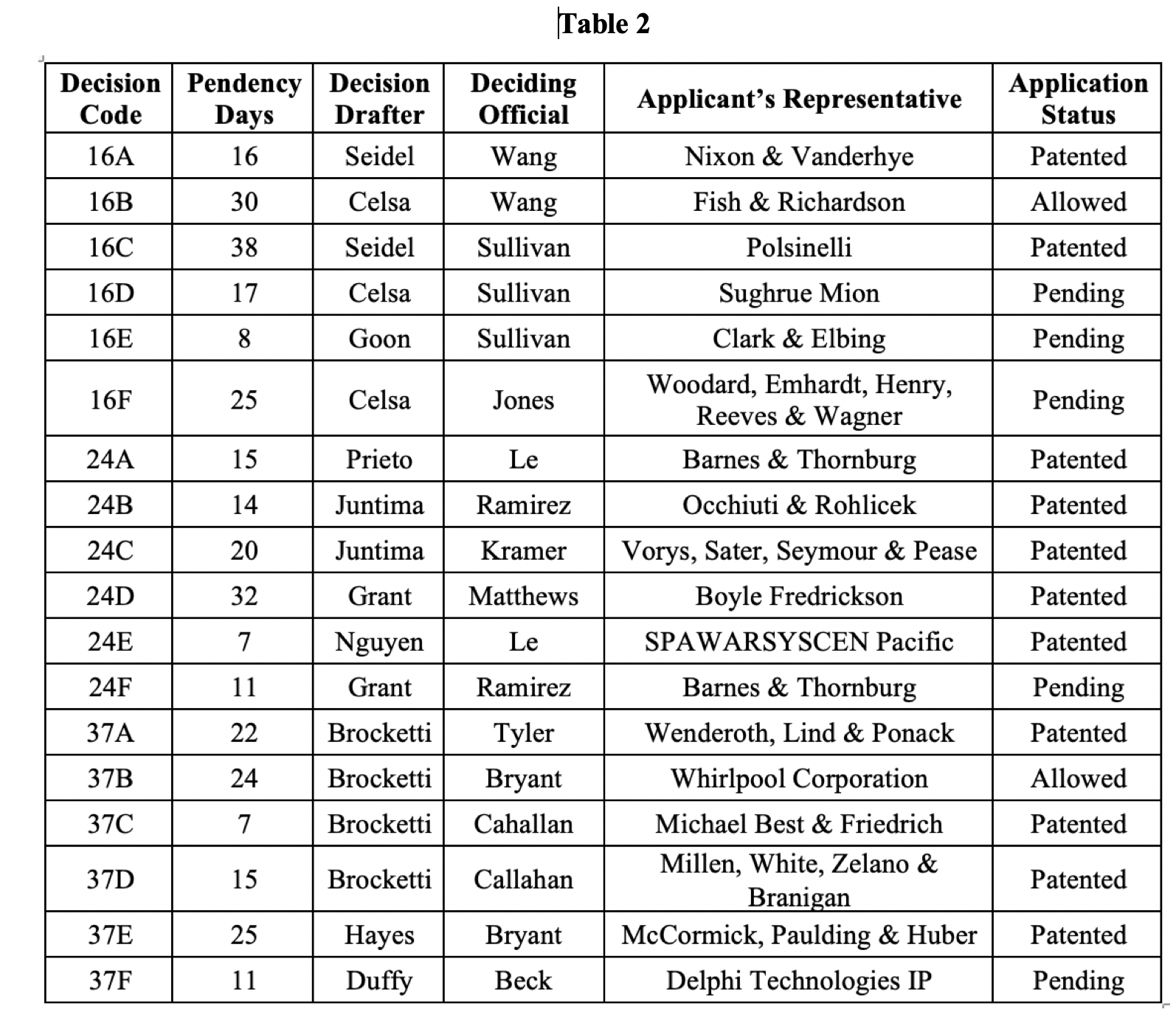 Altogether, the 18 petitions were filed on behalf of applicants by 17 different representatives who successfully navigated the procedural perils outlined in Parts I-IV. We reviewed the electronic files and found all the petitions listed in Table 2 were timely filed and promptly entered into PAIR Transaction History. The decisions issued in an average of 20 days, far faster than the USPTO’s posted averages and provide examples of successful arguments when challenging improper finality.

Should I Request, and Pay For, an Expedited Review?

Applicants can request expedited processing of a petition for a variety of situations, including

Throughout this series of articles regarding after final petitions, we found only a few requests for expedited review of an after final petition.  This seems unusual given the tension between practitioner’s obligation to timely respond to the final Office action and the Office’s history of processing these decisions so slowly that the petition loses all practical significance.

Perhaps practitioners are unfamiliar with the processes for expediting a petition decision. A deep scroll through the USPTO webpage turns up the following:

This guidance, quietly added to the USPTO Petition Process webpage in the summer of 2019, is not included in the June 2020 MPEP revision to Chapter 1000. In any event, our analysis suggests a concurrently filed petition under 37 C.F.R. 1.182 and fee is not necessary to receive expedited review. Only one petition in Table 2 was accompanied with a request and fee for expedited review under 37 C.F.R Section 1.182 –  Part II’s Decision V, included here as Decision 16C. Interestingly, this decision was issued in 38 days, far faster than Table 1’s averages, but the slowest of any decision in Table 2.

In Parts III and IV, we found examples of concurrently filed petitions being decided within the same TC or by the same Group Director resulting in different outcomes, i.e., treated on the merits vs. dismissed as untimely or as moot. We analyzed our survey of decisions to see if promptly granted petitions could be attributed to the personnel overseeing the decision. In all, the 18 decisions were drafted by 10 different TC personnel and granted by 12 different TC Group Directors. In each surveyed TC, we found that faster granted petitions were not unique to any particular Group Director or Quality Assurance Specialist (QAS). Table 2 shows most Group Directors and QASs in TC1600, TC2400 and TC3700 have the capability to quickly process, review, draft and mail a favorable after final decision.

What Constitutes a Premature, Incomplete or Incorrect Final Office Action? 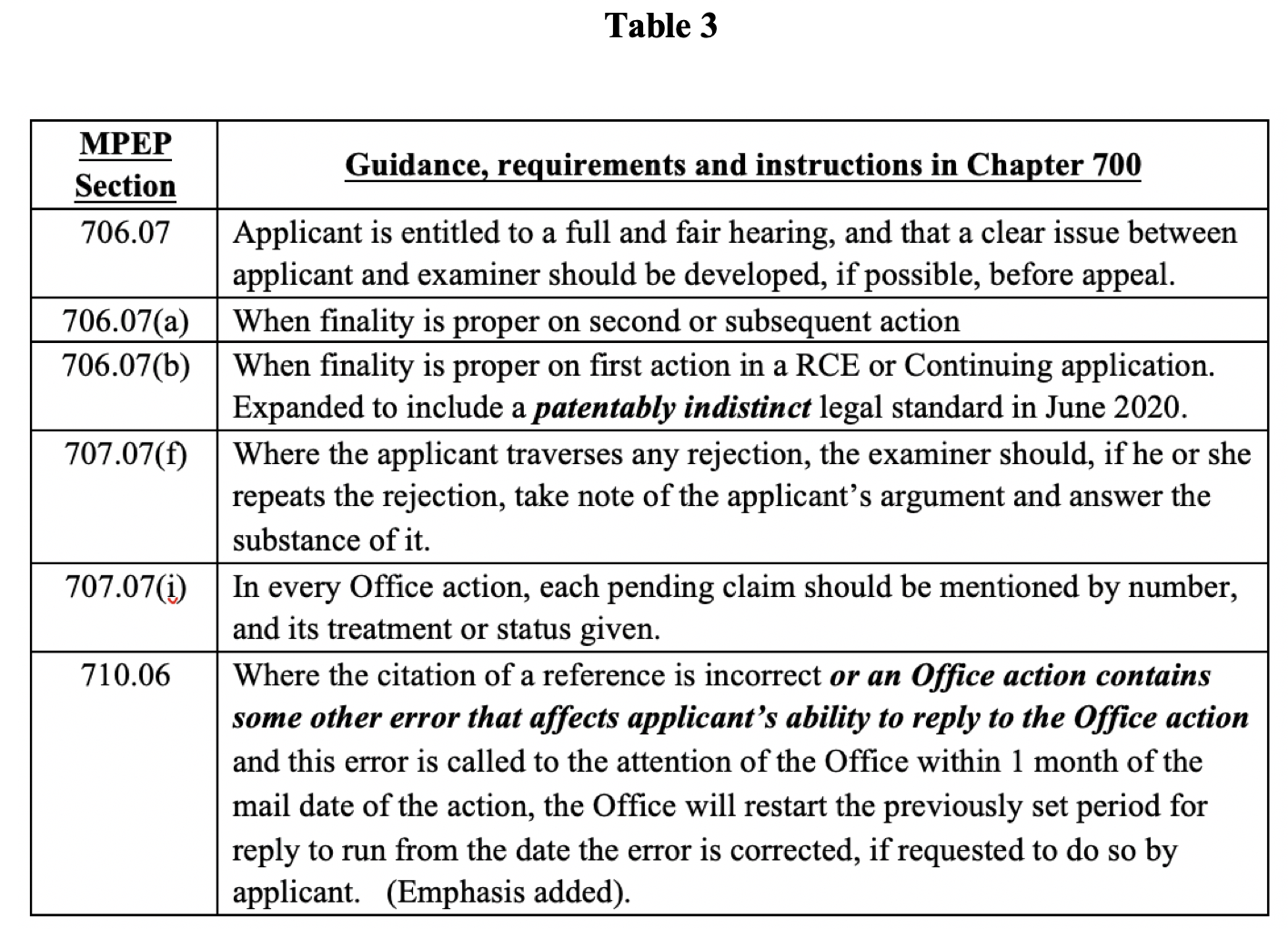 To ascertain whether a final Office action contains a petitionable new ground of rejection, practitioners may refer to MPEP Section 1207.03(a) and compare their factual situation to ten factual situations provided in Table 4. 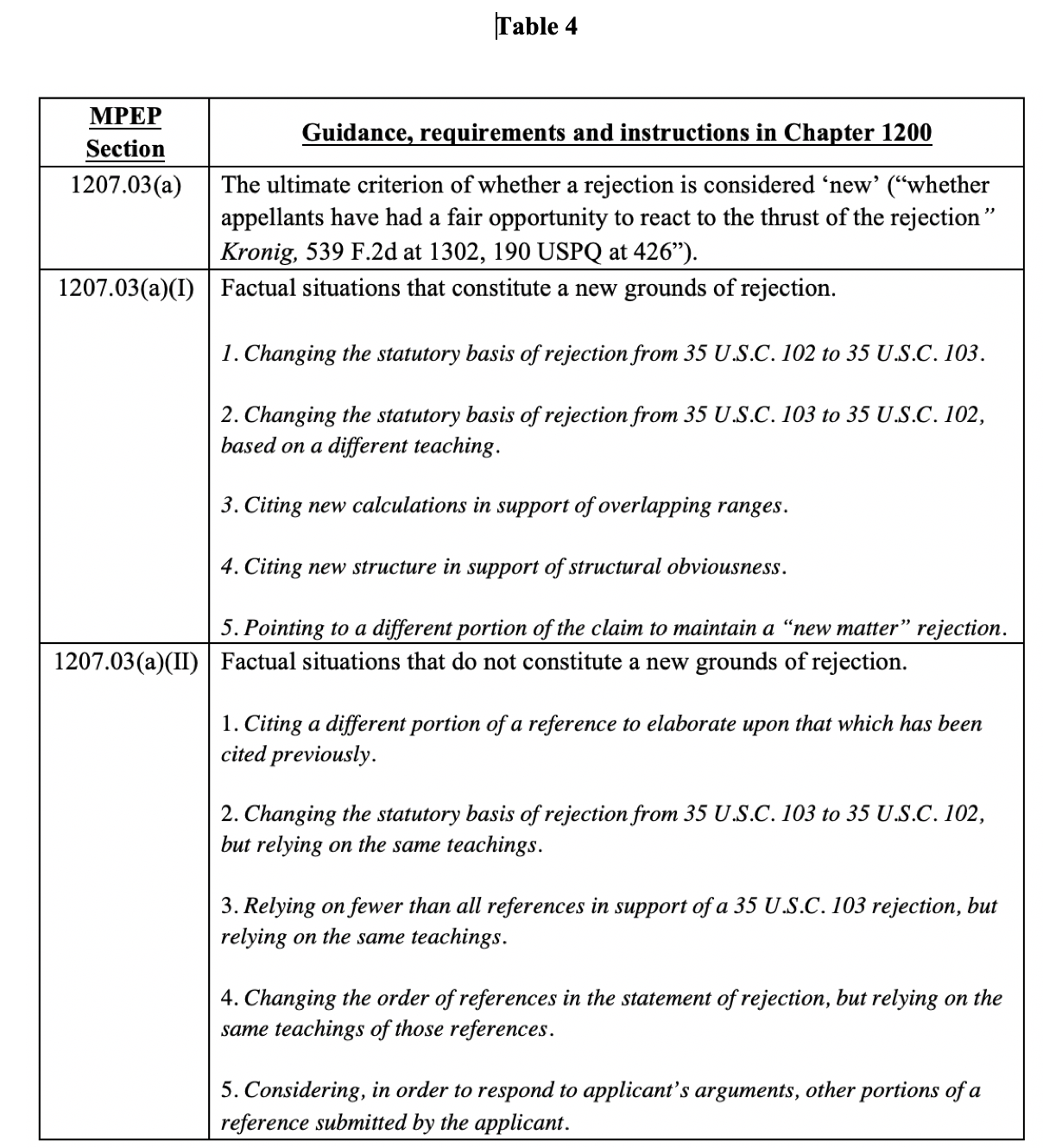 For example, when an examiner cites a new element, structure or section of previously applied prior art, the rejection should be designated as a new ground of rejection. Section 1207.03(a)(I)(4). This argument was successfully applied in a petition challenging the  appropriateness of a final Office action in Decision 24E. 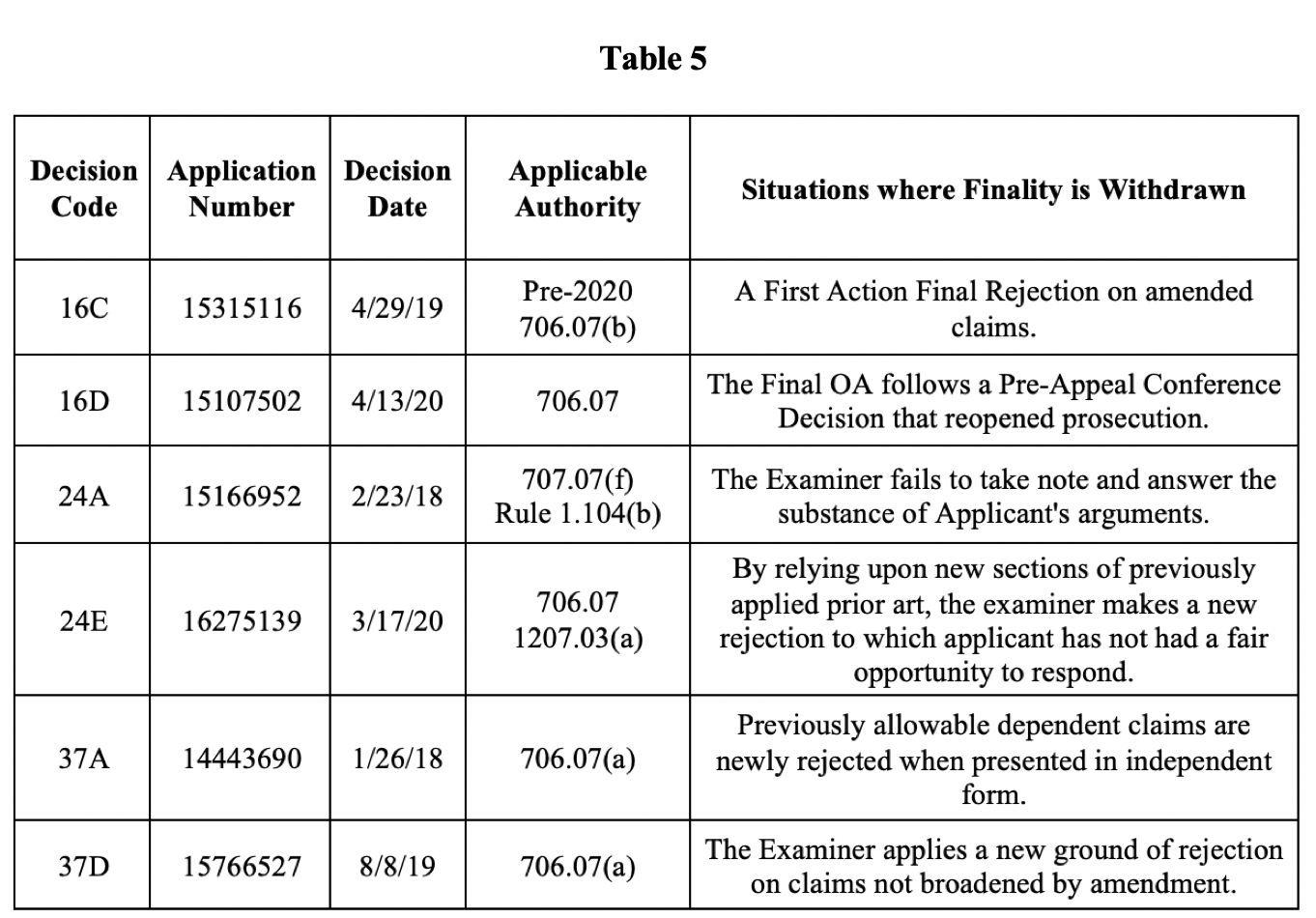 The guidance in Table 4 and in the petition decisions in Table 5 help practitioners identify improper final Office actions.  Granted petitions directed to similar fact patterns can provide successful lines of argument when requesting withdrawal of finality. For example, a granted petition drawn to similar fact patterns can be persuasive when requesting a primary examiner withdraw finality of an Office action via Section 706.07(c). Because the determination of a proper final Office action is strictly procedural in nature, and not tied to any specific industry or technological concern, a decision from one TC should prove persuasive when presented in another TC. Examples of promptly decided petitions should support requests that the petition at issue be processed and granted in a similar time frame.

Do Petitions Challenging an Examiner’s Action ‘Poison the Well’?

Anecdotally, patent practitioners are reluctant to challenge an examiner by petition, fearing that the act of filing a petition may irrevocably “poison the well”. Given the power a primary examiner holds over an application, coupled with the USPTO management’s seeming reluctance to interfere with a primary examiner’s decisions, fear of retaliation is an understandable concern.

Fascinatingly, we uncover the opposite. Table 2 shows 72% (13/18) of the applications receiving promptly granted decisions in 2018-2020 have since been allowed or issued. The remaining applications are pending. Remarkably, in eight cases (44%), the petition decision was immediately followed by a Notice of Allowance.

This outcome may be more than a coincidence.  The Examiner’s Performance and Appraisal Plan Guidelines permits Supervisory Patent Examiners (SPEs) to review the quality of any Office action which comes to the rating official’s attention for any reason. A petition challenging a premature final rejection necessarily brings the application to the attention of the examiner’s SPE, QAS and Group Director. The act of filing a petition directed to the propriety of an examiner’s Office action not only prompts management to review procedural correctness of finality, but also permits management to review the merits of the rejections. If warranted, management can work behind the scenes to help their examiners withdraw or correct improper rejections and identify allowable subject matter.

Petitioning to overcome an improper final Office action is, contrary to conventional wisdom, not necessarily a futile exercise. Applicants can and do obtain granted petitions in far faster time than indicated in the USPTO Data Visualization Center. We found prompt entry of the petition into PAIR’s transaction history correlates with faster processing and higher grant rates. (Part IV)  In fact, 65% of the after final petitions entered within four days of filing are granted, on average, in 33 days. To help ensure prompt entry into PAIR transaction history and to help the Office meet their internal deadlines, practitioners can reach out to the petition drafter, usually a TC QAS. QAS and Group Director contact information is provided at the bottom of petition decisions and in Patent TC Management Roster. Petitioning to overcome an improper final Office action can help protect applicants’ rights and, in many instances, advance prosecution to allowance.