Confessions of a Frustrated Patent Attorney: The Telephone Call 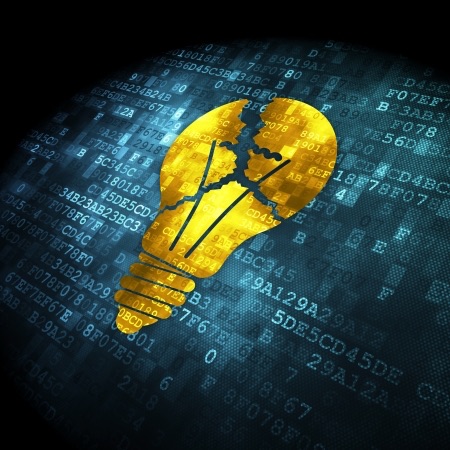 One of the most enjoyable aspects of being a patent lawyer is talking to people about protecting their ideas.

I used to receive telephone calls, quite frequently, asking about the procedure for preparing and filing a patent application. I enjoyed providing callers with an overview, even though I knew from experience that most couldn’t afford to go through the patenting process with me.

But I kept the faith that most patent-worthy innovations did eventually find the support they needed to endure the patenting process and earn patent protection. You know: The good old days.

Today, I no longer receive these calls. There could be a few reasons why. One certainly could be that my practice has evolved over the years to concentrate more on contentious matters. I’ve spent less time on the front lines of patent prosecution as a result.

But I suspect the main reason is that inventors are giving up an expectation that patent protection is even worthwhile. And I get it. If I were to get a call these days, I could no longer paint a rosy picture for would-be patentees.

It used to be that such a caller would launch into an enthusiastic account of the development of an invention. Regardless of whether I thought it was patentable right away, it was usually an energetic, interesting, and fun conversation. 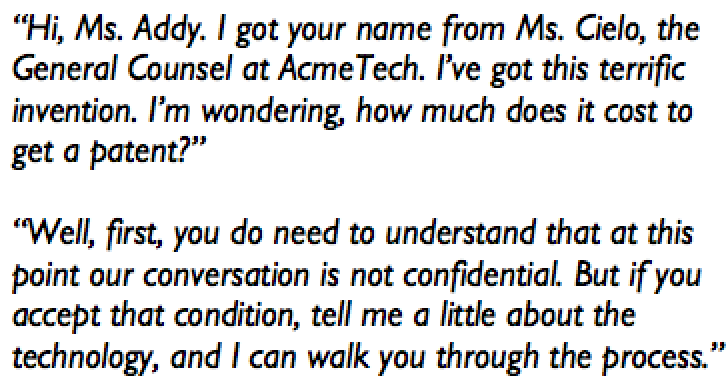 But these days, I fear the conversation would have a different tone. It might go more like this:

“Hi. Thanks for calling. I’d love to talk further with you. But first, let me lay out a few things for you to consider. Hang with me here.

“Without your disclosing to me anything confidential about your invention, does it implement software? It does? Shoot. Trying to secure a patent might not be the best road for you.

“Yes, yes, I understand. I know everything has software in it. But courts can’t be depended on to recognize these types of inventions any more. Even if you do receive a patent, you’ll have a hard time enforcing it.

“And, bear in mind, by applying for a patent in the first place, you’d be disclosing your valuable invention to your competitors. Maybe consider trade secret protection?

“Still interested? Are you sure? Ok, then hold on to your seat cushion, because you’re in for a bumpy ride.

[Here I describe the process of drafting, filing, examining, and possibly issuing a patent].

“Now, all that’s going to cost you about $25,000. It doesn’t sound like that much, I guess, in the grand scheme of things. And you may end up with a patent.

[Short pause—while the potential client reflects on whether to take out a home-equity loan or sell the second Subaru.]

“You said you have identified infringers? Who are they, so I can run conflicts.? Oh, okay: Apple, Facebook, Twitter, Google … yeah, the usual suspects. Of course, we can clear all of those.

“With these defendants, you could file in the Northern District of California, but I wouldn’t recommend it. That’s the most patent unfriendly district in the country—I can’t imagine why. Let’s see, where are your business operations? Oh, Alabama? Ok, well, today, that’s a great place to file a patent litigation, at least against Apple.

“Please keep in mind, though, that once you file your lawsuit, it will probably be another two years before you can begin pursuing the infringers.

“Why? Well, first, you’ll have to survive a motion filed by an infringer to dismiss your case on the pleadings because your patent allegedly is abstract.

“Yes, abstract. Have you ever heard of Alice? No, not the book, but a similar genre. Another Supreme Court case. Alice Corp. v. CLS Bank, dealing with abstractness in patents. If your patent is found to be abstract, the claims consist of parts that are not eligible for patent protection.

“It works like this. A defendant files a motion analogizing your invention to something it is not. You know, like comparing the speed of the swing arm in a commercial dishwasher to an airplane propeller. Or like comparing a database sorting system to re-shelving books in the library. Or, comparing a novel computer RAM arrangement to a barista keeping track of coffee orders. Something fatuous and totally unrelated like that.

“Then, based on the finite patent knowledge of the generalist district court, the court looks at your pleadings and agrees with the defendants. For whatever reason. Like, the court had a headache that day, or got up on the wrong side of bed and stubbed his toe. Or maybe thinks you are a troll. Whatever.

“So the court holds that the elements of your patent claim are not new and that when considered in combination the court did not find an “inventive concept.”

“No, whether there’s a patented “inventive concept” isn’t a factual issue. According to the Federal Circuit it’s something any generalist judge is capable of determining on the pleadings.”

“So the court holds your patent invalid. And, you think, well, okay: the judge got it wrong, but I can appeal.

“Whoops. The Federal Circuit is currently running at a 90%+ affirmance rate for cases appealed from a dismissal on the pleadings as abstract. So: patent killed.

[Lots of inventor explanation on how his invention is not abstract.]

“Yes, sure. I get it. Convinced it’s great? Okay. As long as you believe it will survive being compared to a barista’s methods for keeping track of coffee orders or maybe a dinosaur toy with a red dot for identification. Then you have to consider the alleged infringers’ next moves.

“Assuming you survive Alice, the defendants next will petition for inter partes review at the Patent Office’s Patent Trial and Appeal Board. It’s a fantastic new tribunal established by Congress basically to spray bullets and kill as many patents as possible. That’s what it does—destroys patents.

“And your opponent will then ask the district court to stay the infringement case pending determination of one or several IPRs filed at the Patent Office.

“Remember: These IPR procedures were developed as part of the America Invents Act, but not to promote Americans who invent, mind you. Instead, they allow the PTAB to take a “second look” at your patent. That’s patent-speak for spraying bullets.

“Each of your defendants will file a separate petition for IPR, explaining why they believe your patent is invalid. Of course, there’s no presumption that the Patent Office got their decision to grant the patent right the first time. So don’t look for any presumption of validity to help you there.

“Sorry, okay. Yes, are you okay? Still with me, here? Want me to continue?

“Sure, yes, I understand that you could possibly afford to go through the Patent Office and spend $25,000 to obtain the patent. But the patent you obtain would not have been tested. Patents that haven’t been PTAB tested aren’t really patents anymore. So to test it, the cost is $300,000. Per IPR. Oh, and plus your initial $25,000.

“This still within your budget? Then consider this. If your patent survives the IPR—or all of them—then you can go back to the district court to press on with your patent infringement litigation. But the statistics for surviving an IPR are grim. North of 90% of all patents subject to IPRs are killed entirely or have some claims invalidated. And, as with motions to dismiss, the Federal Circuit affirms over 90% of the PTAB’s decisions.

“But, let’s just assume your patent survives this PTAB test, too. Back at the district court, the same defendants that filed the IPRs will now pursue other invalidity defenses, but at least you can proceed with your infringement case in tandem.

“So, back to the viability of securing a patent on your invention. It may be terrific. It may be valid subject matter. It may be revolutionary. But the real issue here is can you afford the fees to file, the costs to confirm it at the PTAB, and the costs of bringing a successful infringement litigation.

“At this point, just the litigation will cost you about $2 million to get through a trial. We can discuss appeal after that. And, if you lose? The competitors continue to use the invention you originally disclosed to them in your patent application. For free.

“So, for full disclosure of your invention to your competitors as part of filing for a patent, this is what you get:

All the while, what do your competitors get? The roadmap of your invention, delivered right to their computer monitor from www.uspto.gov.   Now that’s “efficient infringement.”

“So for a mere $2,625,000 you can disclose your most important innovation to your competitors, and they can use it and make sure that you actually have no rights to it.