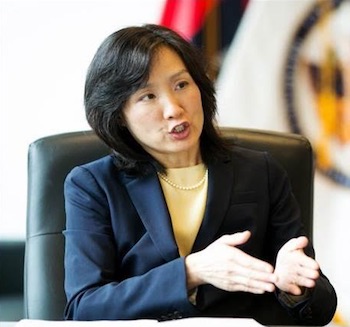 President Donald J. Trump was sworn into Office on Friday, January 20, 2017, at approximately 12pm ET. It is now 12 days later and the United States Patent and Trademark Office (USPTO) has still not announced whether Michelle Lee has been held over by President Trump and, therefore, remains Under Secretary of Commerce for Intellectual Property and Director of the USPTO.

Multiple times over the past 12 days I’ve reached out to the Office and asked them if they could comment on the status of Michelle Lee, whether she continues to be employed by the USPTO, or whether there is an Acting Director presently leading the agency pending a nomination by the President and confirmation by the United States Senate. My most recent communication with the Patent Office took place late yesterday afternoon. In an e-mail I asked whether the Office could “comment on who is currently the Director or Acting Director yet?” In a return reply received within 15 minutes, I was told that the Office still had no comment.

Despite the continuing intrigue over who is running the USPTO, the last several days have provided the Trump Administration with a lesson on the risks it is taking keeping any Obama political appointees.

Over the weekend President Trump signed multiple Executive Orders, one of which placed restrictions on travel from seven countries with known ties to terrorist activity. That Executive Order touched off widespread protests, multiple court challenges, and a variety of commentaries. Then on Monday, January 30, 2017, Acting Attorney General Sally Yates ordered Department of Justice lawyers not to take any action to defend President Trump’s controversial Executive Order. President Trump swiftly fired Yates and replaced her with Dana J. Boente, the United States Attorney for the Eastern District of Virginia, who will serve as Acting Attorney General until the Senate confirms Senator Jeff Sessions (R-AL).

I raise the issue of the travel ban and the firing of Yates not to delve into the politics or merits of immigration or terrorism, but to question the wisdom of President Trump keeping any high level political appointees who served during the Obama Administration.

Yates obviously does not support the President’s agenda, but if you can put politics aside (a big ask I understand) most would recognize that what Yates did was an extraordinary act of defiance. She obviously has the right to do that, but President Trump obviously has the right to have his Justice Department fight for the implementation of his policies. Ultimately, it is President Trump’s decision to make, which will be thoroughly reviewed by the federal judiciary. While we can hope the Department of Justice would give sound legal advice, Yates had to know she would be fired for ordering lawyers not to take action to defend the President’s policies. After all, like all other agencies the Department of Justice reports to the President, not the other way around.

Yates refusing to instruct DOJ lawyers to at least make the best arguments available to support the President’s agenda is extraordinary and simply not comparable to what occurred during the so-called Saturday Night Massacre, which occurred when President Richard Nixon fired his Attorney General and Deputy Attorney General for refusing to dismiss the special prosecutor looking into the Watergate matter. As we know, Nixon himself and his Administration were under investigation during Watergate. Here Trump is not under investigation, nor is any member of his Administration under investigation. Thus, at best, Yates must have thought that Trump’s Executive Order was unconstitutional or somehow illegal. While reasonable minds can differ on that point I suppose, ultimately Yates is not the person vested with making that decision in our system of government.

The actions of Sally Yates quite clearly show the problems associated with keeping senior level decision-makers who wield broad discretion from a previous Administration. Whether you like what she did or despise what she did, what she did is not in dispute in any serious or logical way. Yates superimposed her views on the Department of Justice in an attempt to subvert the President’s policies. She disagreed with the President and rather than allow the Judiciary to play the role for which it is designed she decided that the United States would capitulate. Again, the decision was not hers to make.

The Trump Administration will take many positions that will be diametrically opposite to those taken by the Obama Administration, as we have already seen. Having an Obama appointee, such as Yates (or Michelle Lee) in a position to thwart or subvert President Trump’s agenda from within is ill-advised.

In the absence of any information the rumor mill continues to churn, and those who are knowledgeable about patent politics believe there are two camps within Trump’s inner circle. One camp lead by Peter Thiel and Jared Kushner would like to see Michelle Lee stay, or perhaps be renominated as Director. The other camp, presumably the conservatives in the President’s inner circle, want campaign promises to be delivered upon and are in favor of draining the swamp and that starts with getting rid of all Obama appointees. Which camp will prevail remains to be seen, but the Yates episode could, and probably should, be viewed as a cautionary tale of what can happen if you do not clean house. Allowing those political appointees loyal to the former President — a President who had dramatically different ideas about pretty much everything — to stay in positions of power seems like a mistake.

Sally Yates proves in a very public way why it is a mistake to allow political appointees from the Obama Administration to be held over. But for every public affront how many private episodes will occur where Obama appointees will seek to undermine President Trump? The risk doesn’t seem worth the reward when there are many very capable individuals available and interested. In the patent world, for example, both Phil Johnson and Randall Rader are Republicans. Both have very long and distinguished careers in the patent field. Both Johnson and Rader would clearly take the Patent Office in a new direction and deliver on the Trump campaign promise to Make America Great Again. There are no doubt others who are highly qualified who would also do the same, while being ideologically aligned with the President and the Republican party. So why is there a need to keep Michelle Lee?

Perhaps the Yates episode will provide President Trump with much to consider beyond what is specifically means relative to this particular Executive Order. It certainly should.