“Under the letter of the law it does not seem inherently wrong to hold at the pleading stage that paid endorsers are potentially liable under trademark law for the words they choose to say to consumers on behalf of would-be infringers, particularly when the endorsers actively facilitate consumers’ purchase of a product.”

When an influencer is paid to promote a brand – and the brand’s name is trademark-infringing – can the influencer be on the hook for the infringement? A federal district court just said yes. The result could widely expand trademark litigation against influencers – and could reshape how companies and their influencers relate to one another contractually. 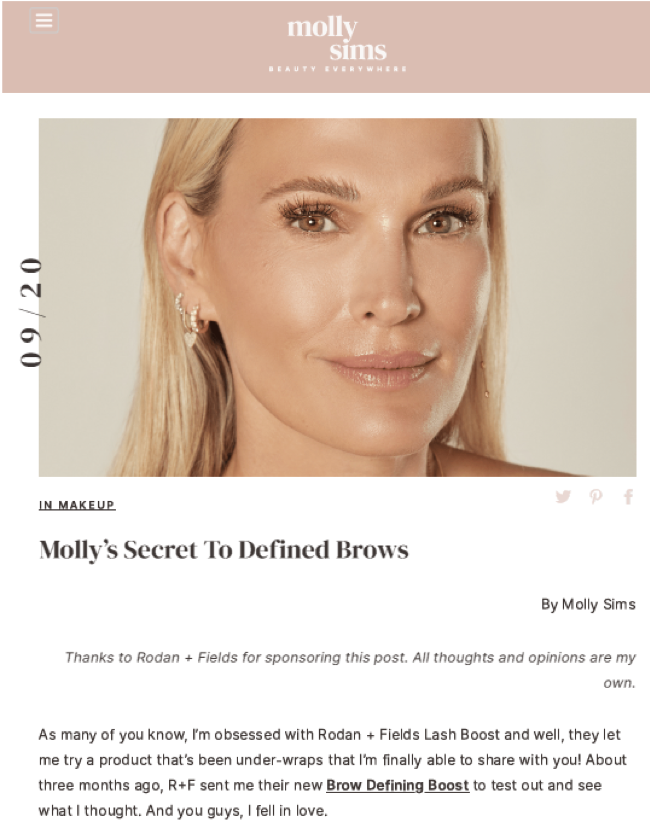 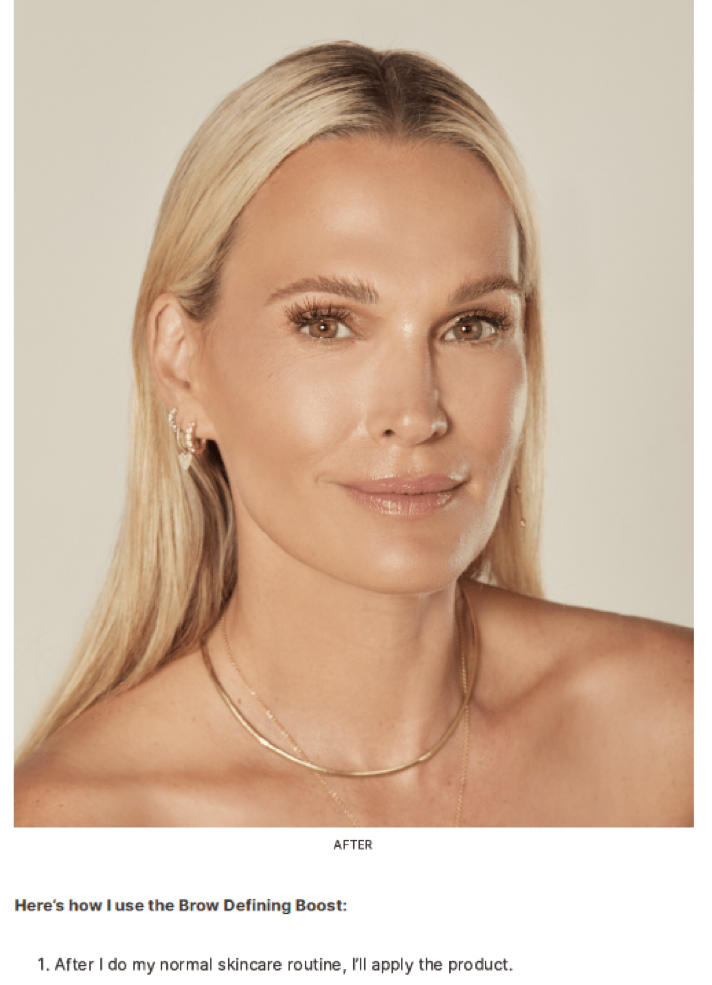 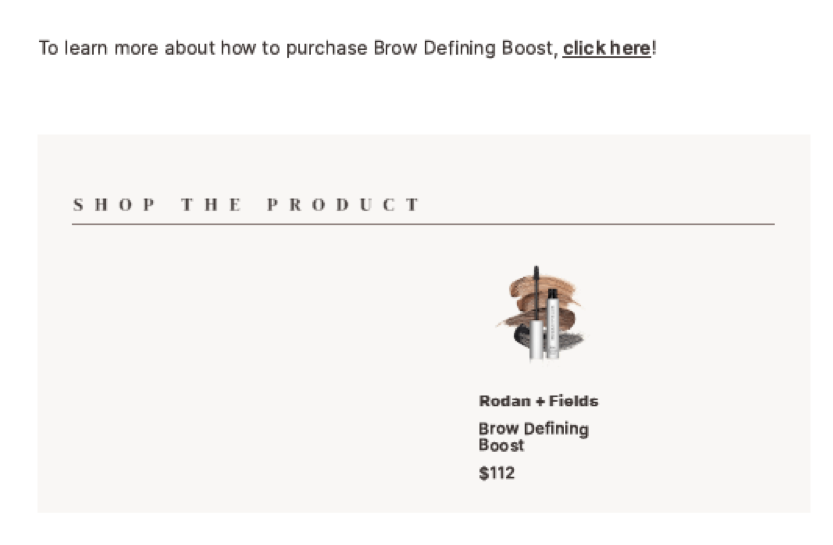 Competitor Petunia owns the registered trademark BROW BOOST, which it uses in connection with the sale of its “Billion Dollar Brows” eyebrow primer and container. Petunia sued both Rodan & Fields and Sims in Los Angeles federal court. Petunia claimed Sims was liable for the alleged infringement because her blog post had mentioned Brow Defining Boost by name – the argument being that the three-word product name infringes the two-word BROW BOOST.

Petunia asserted claims for direct and contributory federal trademark infringement, and federal unfair competition (false designation of origin). It also asserted California state-law causes of action for false advertising and for alleged unlawful and unfair business practices under Cal. Bus. & Prof. Code § 17200, et seq. Sims moved to dismiss all causes of action against her for failure to state a claim.

On August 6, U.S. District Judge Cormac Carney ruled largely against Sims, refusing to dismiss the direct trademark infringement claim and the unfair competition claim. He held that Petunia sufficiently alleged the blog post was a commercial use of its trademark that could cause consumer confusion.

Significantly, Judge Carney noted that within the post Sims had thanked Rodan & Fields for “sponsoring” it. She also included a photo of the product and linked to a site where the product could be purchased (even informing her readers of the price). At the motion to dismiss stage, the court said, these were clear indications that the blog post could be considered a paid advertisement; it was premature at best to say that the post was First Amendment-protected commentary on a product.

The court likewise noted that this case fit within the general rule that trademark cases ordinarily survive motions to dismiss on the issue of likelihood of confusion, because that inquiry is so fact-specific. Judge Carney held that the facts pled here were sufficient to survive such a motion. For example, the marks at issue were quite similar – plaintiff’s “Brow Boost” vs. defendant’s “Brow Defining Boost.” The one-word differentiator in the middle was not enough as a matter of law to protect the challenged use. The state-law cause of action for unfair business practices likewise was deemed “substantially congruent to claims under the Lanham Act” and as such also survived Sims’ motion.

Sims did score a partial win: Noting a lack of allegations that Sims had actual or constructive knowledge that “Brow Defining Boost” was infringing, Judge Carney dismissed the claims against her for contributory trademark infringement under federal law and for state-law false advertising.

Did the Court Get it Right?

At first blush, it may seem odd to hold third-party influencers directly liable for trademark infringement. After all, influencers are not themselves selling competitive products (or any products at all). And, in the corporate context, employees are not typically held personally liable for trademark infringement by their employers unless they are knowingly and actively the moving, conscious forces responsible for the infringement.  See, e.g.  Chanel, Inc. v. Italian Activewear of Fla., Inc., 931 F.2d 1472, 1477 (11th Cir. 1991); Bambu Sales, Inc. v. Sultana Crackers, Inc., 683 F. Supp. 899 (E.D.N.Y. 1988); cf. Steven Madden, Ltd. v. Jasmin Larian, LLC, 2019 WL 294767, *4 (S.D. N.Y. 2019) (no personal liability for company’s “Creative and Design Chief” given lack of allegations that the individual personally authorized or approved the alleged infringing activities of the corporation).

It should be emphasized that this was just a decision on a motion to dismiss. As the case moves forward, Sims may yet prevail on any number of grounds. But under the letter of the law it does not seem inherently wrong to hold at the pleading stage that paid endorsers are potentially liable under trademark law for the words they choose to say to consumers on behalf of would-be infringers, particularly when the endorsers actively facilitate consumers’ purchase of a product.

What Impact Will the Decision Have?

Online influencer advertising is of course huge business these days. Companies are spending vast amounts to have influencers talk about the companies’ products on Twitter, Instagram, YouTube, Facebook, blogs and similar online platforms. Some of the money is paid to celebrities like Molly Sims and Kim Kardashian. Much is paid to ordinary people, too.

Here are some things to watch for as the impact of the Petunia decision against Molly Sims begins to be felt:

This much seems sure: Sims – who is perhaps best known for wearing a $30 million bikini made of diamonds in the Sports Illustrated swimsuit issue – is now enjoying a different kind of fame. Time will tell what broader legal and commercial impacts the Petunia decision may have. We will be watching and will aim to report back in this space.

Jeremy Feigelson is a litigation partner, Co-Chair of the firm’s Cybersecurity & Data Privacy practice, and a member of Debevoise’s Intellectual Property and Media Group. He frequently represents clients in litigations and [...see more]

Paul Rubin is a corporate partner based in the Washington, D.C. office and a member of Debevoise and Plimpton’s Healthcare Group. He is noted as a recognized practitioner for Regulatory Healthcare by [...see more]