The power of blockchain has upended the monopoly governments have had on currency, and other industries can expect similar displacement for enterprises that don’t embrace this steep innovation curve.

This is the ninth in a 13-part series of articles authored by Kilpatrick Townsend that IPWatchdog will be publishing over the coming weeks. The series will examine industry-specific patent trends across 12 key patent-intensive industries.

Our last article in this series discussed patenting trends in the Therapeutics and Diagnostic Molecules Industry. Today, we turn to the blockchain industry, which is a foundational technology that is expected to revolutionize many different industries and not just digital currency.

To quickly summarize this series: 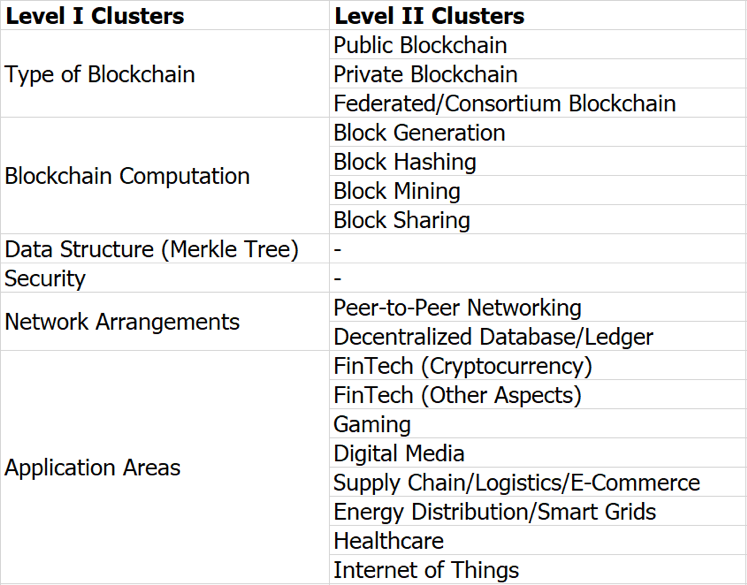 Blockchain patent filings are exploding, but we are still very early in the innovation cycle of this technology. Important to note about the data here: it is limited and especially thin, as this industry was just invented a decade ago, when there were just a handful of filings, and less than a thousand filings today. This is the only area in the greater study that was not long established, but the importance of blockchain is something that cannot be ignored in many industries. Although the most well-known application of blockchain is cryptocurrency, blockchain provides authenticity to any electronic transaction or contract in an open and trusted way. Blockchain underpins algorithmically protected currency but is expected to disrupt many other industries where algorithms can be trusted more than conventional mechanisms.

Our study broke down the limited number of blockchain patents in a number of ways, such as the Type of Blockchain, applicability (i.e., Computation, Data Structure, Security, and Network Arrangement) and Application Areas. We determined whether the patent application pertained to one or more of the categories shown in the topology below. If so, the application was appropriately tagged, such that it could be included in one or more category-specific data subsets for subsequent analysis.

Blockchain patent filings are exploding, as can be seen in Figure 2A, where every cluster saw steep growth (though filing counts still remain small compared to other industries). For a technology that didn’t exist much more than a decade ago to have such patent interest is a tribute to the few pioneering inventors of the technology, who published a white paper under the pseudo name Satoshi Nakamoto in 2008. 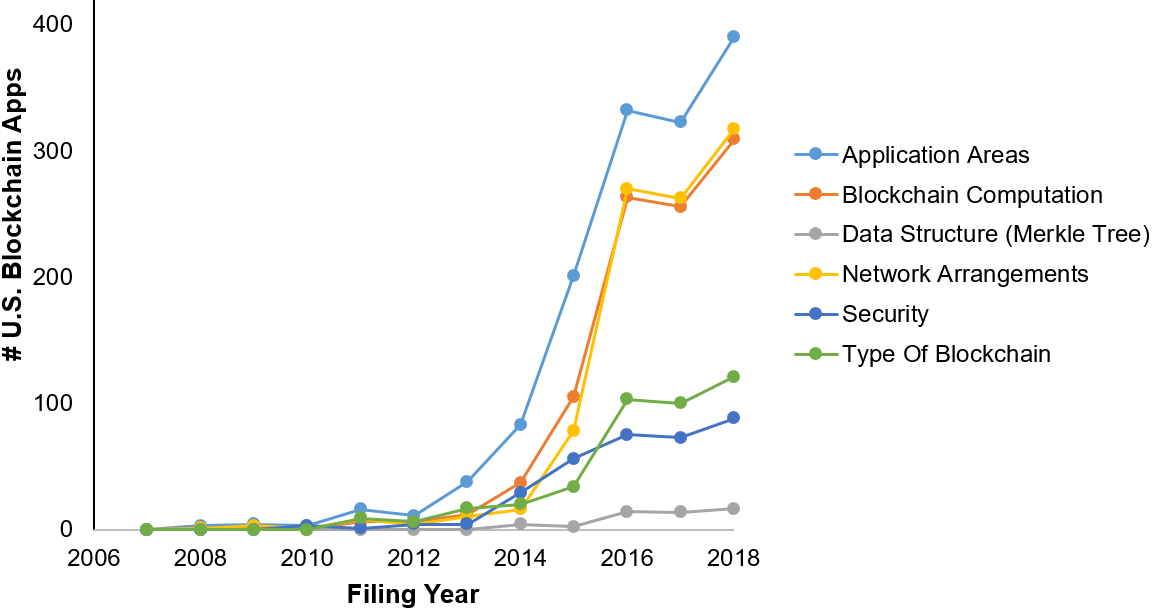 The study broke down blockchain patents to different application areas in Figure 2B. Today, the dataset is dominated by the cryptocurrency application area. The monetary value of cryptocurrency uniquely self-funds some of this interest with ability to issue a new coin offering. Other established industries are seeing blockchain innovation too, with growth trends expected to continue. Emblematic of the importance of blockchain is the second largest application area, non-cryptocurrency Fintech. The financial industry is slowed by transaction costs and undermined by security and authenticity concerns, which is a perfect use case for blockchain’s algorithmic protections. Other industries can expect similar displacement risks for conventional solutions. 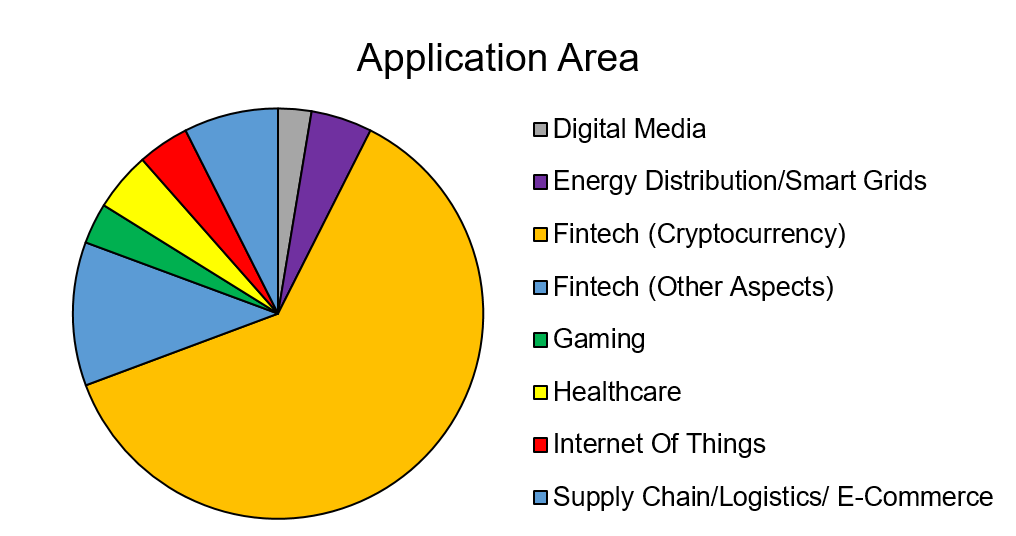 The global interest in U.S. patent applications in the blockchain area is settling out in the last few years. The early data in this area is so thin as to be ignored when sizing up today’s trends. Certainly, over the last five years, we are seeing overseas interest in patent protection in the domestic market. We are also seeing the early U.S. pioneers having to share more of the innovation with foreign interests, such that more than one quarter of patent filings are from overseas enterprises. 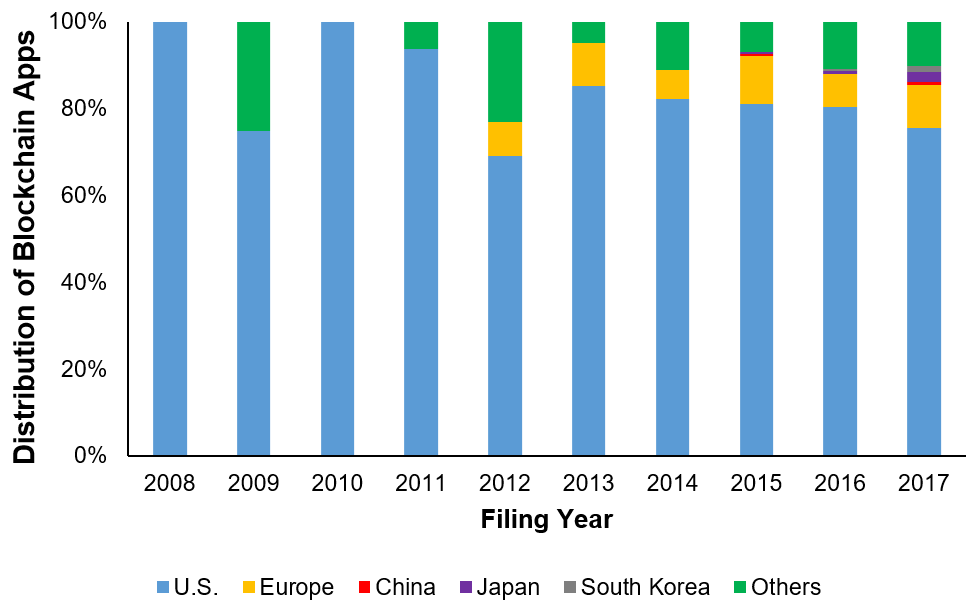 We are experiencing the birth of a major technology area with blockchain. Incredible growth over the last decade has been spurred by unnamed pioneers who wanted an algorithmically protected currency to rival fiat currencies backed by governments. Success of cryptocurrencies will undermine a pillar of power for most governments to manipulate monetary policy, with the ability to create currency. This upending of fiat currency is expected to be replicated across many other sectors. Recognizing this steep upward trend will help forward-looking businesses invest in providing those new solutions to avoid becoming displaced by pioneering innovation in their verticals.