Issa seems to believe patents are an entitlement, not a property right 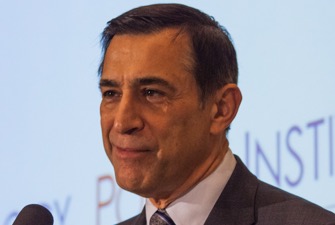 In the June 13th House Judiciary Subcommittee hearing on the effects of TC Heartland, Chairman Darrell showed just how conflicted he is. He first states that patents are property rights and they must strong and reliable. He ignores testimony about China cleaning our clock on patenting, venture capital, startups and job creation due to weak patent rights. He then mocks the messenger. Despite his opening statement lauding property rights, Issa closes the hearing by saying that he is going to file an amicus brief against property rights. This hypocrisy should not go unnoticed.

Issa opened the hearing talking about strong property rights. “The rule of law is key to preserving property rights and nowhere is this more true than with respect to intellectual property. Intellectual property has become the backbone of the last half of the 20th century and without a doubt will be the leading revenue generator in the 21st century. Strong and reliable IP protections depend on Congress getting their rules right to both encourage the development and production of the next generation of innovation…”

Those are strong words strangely coming from a major driving force behind passage of the America Invents Act (AIA), which severely damaged property rights by creating administrative tribunals called the Patent Trial and Appeal Board (PTAB). These administrative tribunals are invalidating property rights at a rate greater than 90% without due process and without a jury, which this week became the core question in a case called Oil States taken up by the Supreme Court.

The effects of the PTAB are exceptionally damaging to small entities. Inventors and startups can no longer defend their patent rights because contingent fee attorneys and investors have left the patent market. That opens their property to unfettered theft by huge multinational corporations, which has now become rampant theft. And rampant theft destroys the startup ecosystem as early stage investors can no longer get a return on their investments and move their money to China and elsewhere where patent systems have been made stronger.

The AIA was made law in 2011. Not so coincidentally, China began strengthening their own patent system the same year. Throughout the hearing, Professor Adam Mossoff of the Antonin Scalia School of Law at George Mason University explained the damaging effects to the U.S. economy of the PTAB and recent Supreme Court’s decisions hostile to patents. He warned that if this continues, venture capital, startups and the economic benefits will move to China.

But the truth is this is already happening. In 2015, nearly twice as many patents were filed in China (1,101,864) than in the U.S (589,410). Venture capital is fleeing to China as a result. In the U.S., “Nationwide, the number of angel and seed stage funding rounds… dropped 62 percent in the first quarter of 2017…” Not surprisingly, the number of startups in China are growing at a very high rate. While U.S. startups are at a near 40 year low. Entire new fields of technology are becoming controlled by Chinese firms. Clearly, venture capital, startups, new technologies and jobs are moving to China and that movement directly maps to the destruction of the U.S. patent system and China’s response strengthening their patent system.

But, Issa wanted to hear none of that. At around 1:19.25 of the hearing, Professor Mossoff explained to the committee how a weakened U.S. patent system is pushing patenting, technology, venture capital, startups and jobs to China. Darrell Issa responded to Professor Mossoff’s analysis by mocking the Professor and laughing at his comments: “I’ll now note that I’ve now heard that China is the country that we’re going to base the high mark of (laughing) of patent (laughing) tolerance on.” Please take a minute to review this exchange. It fully illustrates the arrogance, and the extreme lack of knowledge and curiosity on the part of a very powerful lawmaker who is ultimately responsible for writing our patent laws.

This was not the only time Issa mocked Professor Mossoff. At 1.14.35, Mossoff made the point that there is no statistically valid information that a patent troll problem exists, and that the term patent troll is so undefined and so broad that it encompasses even Thomas Edison. Issa again mocking Mossoff, laughingly said, “I’ve lived a long time. I never thought I’d hear Edison called a Troll in a hearing and before Congress.”

Issa closed the hearing referring Oil States. Oil States asks the question “Whether inter partes review, an adversarial process used by the Patent and Trademark Office (PTO) to analyze the validity of existing patents, violates the Constitution by extinguishing private property rights through a non-Article III forum without a jury.”

Directly contradicting his own opening statement for strong property rights, Issa’s closing statements show that he will continue to take action to weaken property rights. “Lastly, I’m very interested in the case they just took up. I’m a strong believer that for decades we have had ex parte PTO reexamination that invalidated all or some of the claims. So I will be submitting an amicus in that case without a doubt…”

I suppose it is normal to defend a law they sponsored and pushed to become law. But the question in Oil States goes to the heart of what a property right is or is not. The Supreme Court’s answer will guide not only the patent system but potentially all property right disputes for generations. Issa’s definition is that patent is a property right, but that a property right can be invalidated in an administrative tribunal without a jury. If the Supreme Court were to answer with Issa’s definition, there is no protection to property left. In the case of patent rights, the ability of early stage commercialization of new technology will be severely hampered in the United States.

Issa seems to believe that patents are instead some sort of public entitlement like food stamps as is evident in his bill, the America Invents Act, and his continuing actions even last week. Issa’s hypocrisy is so blatant, so obvious and so up front that I’m not sure he even understands what he just said, which is a very dangerous problem. So long as Darrell Issa remains in key lawmaking position in the Republican leadership in Congress, venture capital, patenting, new technologies, startups and jobs will continue to flee from the U.S. to China.