“This action from the USCO may serve as an early warning that anyone filing works that contain any portions generated by artificial intelligence must disclose such portions and be prepared to support their registration and prove a degree of human authorship.” 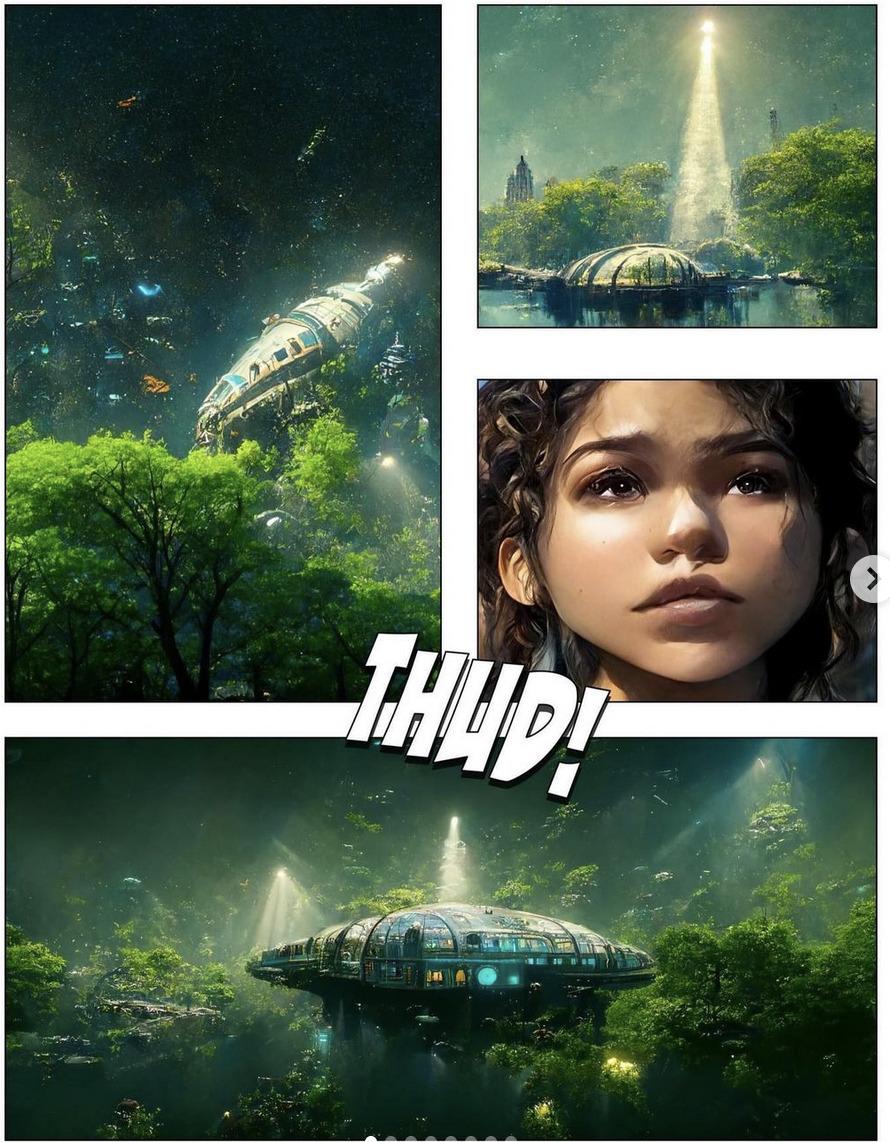 Zarya Of The Dawn

On October 28, Kristina Kashtanova, an artist and artificial intelligence (AI) consultant and researcher, received notice from the U.S. Copyright Office (USCO) that the registration for the first issue of her partially AI-generated graphic novel, Zarya Of The Dawn, may be canceled. A month earlier, on September 15, the USCO issued a registration for Kashtanova’s work, which was subsequently widely publicized as the first known instance of an AI-generated work being successfully registered with the USCO.

In the USCO’s recent communication, “I was asked to provide details of my process to show that there was substantial human involvement in the process of creation of this graphic novel,” Kashtanova explained by email.

When asked to confirm the potential cancellation for Kashtanova’s registration, the USCO provided a written statement saying, “[i]t is standard practice for the Copyright Office to decline to comment on specific registration applications.”

The USCO added, “Copyright under U.S. law requires human authorship. The Office will not knowingly grant registration to a work that was claimed to have been created solely by machine with artificial intelligence.”

The Road from Creation to Possible Cancellation

Kashtanova first made a public announcement about the notice through her Facebook page. She shared that she was given 30 days to respond to the USCO and is currently working with Midjourney, artificial intelligence software that runs as a bot on the social messaging and community app Discord and takes an input of text and generates an image output based on the text, and its legal team. “[The USCO will] look into my process and decide if it was enough involvement,” she added.

This action from the USCO may serve as an early warning that anyone filing works that contain any portions generated by artificial intelligence must disclose such portions and be prepared to support their registration and prove a degree of human authorship. At this time, it’s unclear exactly what amount of human authorship the USCO is seeking for these types of registration applications. Earlier this year, the USCO upheld the refusal to register a work purportedly generated entirely by machine. However, aside from the still unsettled case, the line on the creation-generation spectrum at which the USCO is making its determination is unclear.

Novel issues surrounding copyrightability continue to emerge as technology companies release AI-powered tools and features for consumer and enterprise products. Earlier this month, Microsoft announced the incorporation of OpenAI’s DALLE•2 into Microsoft Deisgner, a new graphic design app in Microsoft 365. According to Microsoft, users are now “able to instantly generate a variety of designs with minimal effort.” GitHub, a subsidiary of Microsoft, is raising copyright issues following the launch of its AI-assistant for writing computer code. Adobe is similarly blurring the line between machine and creator through recently announced rollouts of more AI-powered tools and features across its Creative Cloud suite of apps and services. Guidance from the USCO on the use of AI will be necessary as AI-generated or AI-assisted works continue to become mainstream.

One takeaway for future claimants may be to clarify during the application process to what extent AI tools were used in the overall creation of the work. Normally, claimants must include a limitation statement, which may be the issue with Kashtanova’s registration. The original registration filed with the USCO does not appear to include any limitations, meaning Kashtanova may not have completed the “Limitation of Claim” section to the extent expected by the USCO.

The “Limitation of Claim” section of the application is where anyone filing an application lists any materials that form part of the work unable to be claimed as part of the registration. This is where a filing can exclude works previously published or registered (such as for derivative works or compilations), works in the public domain, or works owned by third parties. Additionally, there’s a section of a copyright application where a claimant can describe all of the new material contained in the work over which they are claiming ownership.

For Kashtanova’s situation, this would likely be that the AI-generated illustrations should have been disclaimed and excluded from the filing, and the new material (the story, arrangement as a graphic novel, and any other copyrightable elements) disclosed. The USCO may make a different determination after reviewing any supplemental materials provided by Kashtanova during the 30-day review period.

Midjourney’s Terms of Service currently include a statement that users “own all Assets [they] create with the Services.” However, there are two exceptions: (1) non-paying members are granted a Creative Commons Noncommercial 4.0 Attribution International License to the assets created (which contradicts the purported ownership statement) and must make their works publicly available to all other members, and (2) paying corporate members are not subject to the Creative Commons license, and are further given additional assurances that their use of the software will be private. If Midjourney is only issuing a Creative Commons license, then it means that Midjourney is retaining ownership over any of the assets that are input or a result of the output by users under the non-paying tier.

Additionally, the Terms of Service specify that when the “Beta Model” or “test” or “testp” mode is used (available during August 2022), the assets are governed by the Creative ML OpenRAIL-M license. The terms of that license include a statement that no claims are made as to the ownership of any outputs of the model.

Applying the USCO rules, if a claimant is seeking to register a work created, in whole or in part, through their use of Midjourney and they fall within the non-paying member, then it is likely they must disclose ownership by a third-party (Midjourney) for that portion of the work within the limitation of claim section. This would be a different issue than that of human authorship, which may also be challenged by the USCO.

Kashtanova provided receipts that document her payment for use of the corporate membership tier in the creation of Zarya Of The Dawn.

“The reason I applied for my [copyright registration],” Kashtanova shared, “was that the comic book was shared on Twitter by a verified user without a credit and reshared many times.” A film version of the work is currently in development.

Midjourney could not be reached prior to publication for comment.

Franklin Graves Franklin Graves is an in-house technology, IP, and media law attorney in Nashville, TN and Tech Counsel for HCA Healthcare.  He is a graduate of Belmont University College of Law [...see more]