Judge Michel tells Congress it isn’t helpful to talk about quality, patents are either valid or invalid 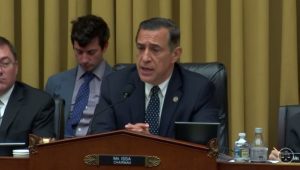 The July 13th hearing on the effects of “bad patents” on American businesses held by the House Judiciary Committee’s Subcommittee on Courts, Intellectual Property and the Internet has been very enlightening despite the one-sided nature of that day’s hearing. During the hearing, Rep. Darrell Issa (R-CA) tried to exert political pressure on a member of the federal judiciary, an act which prompted a strong rebuke from the American Board of Trial Advocates. A closer look at the panel witnesses providing testimony that day, aside from former Chief Judge Paul Michel, leads one to wonder if anyone in Congress is actually interested in having a substantive dialogue about the U.S. patent system.

At the start of that day’s questioning period, Rep. Lamar Smith (R-TX), member of the House IP subcommittee and chairman of the House Committee on Science, Space, & Technology, asked how adept “patent trolls” have been at responding to measures enacted by the America Invents Act (AIA) of 2011 as well as the recent U.S. Supreme Court decision in TC Heartland LLC v. Kraft Foods Group Brands LLC. Julie Samuels of Engine Advocacy noted that, initially after the passage of the AIA, litigation rates went up initially. Of course, that has more to do with joinder provisions of the AIA and the inability to file a single suit against multiple defendants; a hard look at the data shows that the AIA didn’t alter actual litigation rates in any significant way. Samuels, taking a position which likely made her funders at Google proud, cited low quality patents in the high tech space as being largely responsible for “the majority of new cases [being] filed against unique defendants, small companies.” Samuels was “very excited” for a few weeks after the TC Heartland decision was issued up until Judge Rodney Gilstrap’s decision in Raytheon v. Cray to deny a motion to transfer venue out of the Eastern District of Texas (E.D. Tex.). “Our experience is that the Eastern District is deliberately undermining many of the reforms that have been pursued,” said Tom Lee of Mapbox, a company whose only experience includes a total of one patent infringement suit filed against it in the Western District of Texas (W.D. Tex.).

“I think the core of the problem is that most of the 8,300 patent examiners today are not cross-trained in law as well as in various fields of technology,” said former Chief Judge Paul Michel, the one panel witness who made any substantive comments during the day’s hearing. “Patent scope involves claim construction, which means people who understand claim construction case law can do it right.” Judge Michel also suggested that training and supervising examiners on specification as codified by 35 U.S.C. § 112 could help examiners limit the scope of invention more effectively, resulting in higher quality patents being issued. “I think at the end of the day, patents are either valid or invalid as a legal instrument and therefore it’s not very helpful to talk about quality or ‘good’ or ‘bad,” Judge Michel said. “They’re either valid or not valid and with respect to someone practicing the technology, the patent is either infringed as properly construed or it is not infringed.”

Rep. Blake Farenthold (R-TX) asked Judge Michel the kinds of surgical changes which could be made to the U.S. patent system which wouldn’t weaken the entire system. Judge Michel argued that fee shifting provisions could help reduce any litigation seen as unnecessary. “If I file a frivolous lawsuit against you, the federal trial judge should force me to pay your costs and fees as well as my own when he throws the case out,” Judge Michel said. Farenthold put the question on fee shifting to the rest of the panel and no one objected to fee shifting as a bad idea.

Judge Michel further critiqued the way in which the U.S. Patent and Trademark Office’s Patent Trial and Appeal Board (PTAB) conducted its business, noting that the agency didn’t seem to be following Congressional statute as laid out by the AIA. “As I read the statute, the intent was to have policy officials and their subordinates review the intake part and the Board only make the final written decision,” Judge Michel said. “But both have been bucked over to the Board, and I don’t think the Board has the ability to focus on the policy considerations that are in the statute.”

Software patents, which regularly draw the ire of the efficient infringement crowd, were a subject of debate at the day’s hearing. Rep. Jerrold Nadler (D-NY) asked the panel how the USPTO could improve software patents. “My hope and expectation is that the Patent Office won’t be granting frivolous ones in the future,” Lee said. “There needs to be a recognition that software innovation happens too quickly for the patent system to keep up with it.” Lee further mentioned that software enjoys other intellectual property protections, like copyright, license agreements and trade secrets. “My personal opinion is that it would be a much better system if we did not patent software,” Lee said. “I know that many, if not most, software engineers share that opinion.”

“I think the problem is that the category is too broad,” Judge Michel said. “It’s not true that all software-related patents are bad. It’s not true that all business-type methods are bad. Some are very bad, some are borderline, and some are rock-solid.” The categorization of patents as software or non-software innovation wasn’t nearly as important to Judge Michel as addressing significant issues with patent examination or AIA trial processes.

Nadler then questioned Sean Reilly of The Clearing House why covered business method (CBM) reviews at the PTAB should be extended; CBMs were originally envisioned as an eight-year program. Reilly, citing his own experience as a patent examiner at the USPTO, said the problem being solved by CBM review was not a temporary problem and that financial organizations needed a viable alternative to U.S. district court. Further, CBM enabled a path towards challenging invalidity under 35 U.S.C. § 101, as well as Section 112 specification challenges, which weren’t available under IPR. If those grounds for invalidity were able to be challenged in IPRs, Reilly conceded that CBMs wouldn’t be necessary.

Later, Issa pressed Judge Michel on a point he had made earlier on unifying the standards on patent validity between district court and trials at the PTAB. “Since validity is a legal question, I would make the Patent Office standards and procedures conformed to those used in court,” Judge Michel said. For example, the PTAB would have to use accurate construction of claims and not the broadest reasonable interpretation, which Judge Michel called “hopelessly vague and hopelessly lax.” Issa noted that, if only one standard were to be applied, that increases the pressure on the examination process and the examiners who sometimes have little information, much of which is presented by the patent applicant. “I think that’s going to perpetuate the problem further if we go with that approach,” Reilly said. Issa went further into Judge Michel’s suggestion on unifying the standards between PTAB and the district court level, discussing a hypothetical in which one party brings a validity challenge based on prior art information which was not available at the examination phase. “Wouldn’t you prefer, as a district court judge… that you’d be able to consider it de novo since it was not considered by [the patent examiner] and thus, essentially, there but for that knowledge, [the examiner] would have likely given a more narrow or no patent at all?” Issa then returned to Reilly, the former patent examiner, asking him whether he would prefer, as an examiner, to be able to consider new prior art information as de novo and consider the patent anew given the new information. Reilly, Samuels and Lee all agreed that such de novo consideration of new prior art information would be an acceptable standard.

“This actually puts the three of you into a trap set by Judge Michel here,” Issa responded. “Judge Michel commented in his opening statement… that IPR does not grant as if it is a de novo review, as though they simply have new information on a patent.” Issa noted that IPRs do not grant the same processes available in ex parte reexaminations, including the striking of claims which may narrow the patent but the patent is reconstructed as though the information was available to the examiner at the time of examination.

“It’s my view that amendments should be freely allowed during an IPR,” Judge Michel said. “That would get you the result that, if all the new information had been known, the original examiner would have acted correctly. If you allow amendments, the end result is the bad claims go out, the good claims stay, everybody goes away better off.” Judge Michel noted that, of thousands of decisions coming out of the PTAB, only six had ended with amended claims in large part because the administrative patent judges (APJs) have an impossible standard in that they cannot take on the role of patent examiner. Issa questioned Reilly, the former patent examiner, as to whether it was feasible to enable a kind of off-ramp from IPRs to ex parte reexams. Reilly noted that amendments might not be pursued by some patent owners because it could wipe away past damages earned by the challenged claim. Judge Michel called the off-ramp idea “critical” and reiterated the point that it would allow overly broad claims to be challenged while inventors get to keep a patent with more narrow claims. Near the end of the questioning period, Judge Michel also noted in response to questions from Rep. Hakeem Jeffries (D-NY) that the escalation of uncertainty in U.S. patent rights has not only led to the U.S. patent system’s 10th-place ranking in the most recent U.S. Chamber of Commerce IP index but also reduced investment into American research and development and more investment into less risky projects, like entertainment, as reported by the National Venture Capital Association.