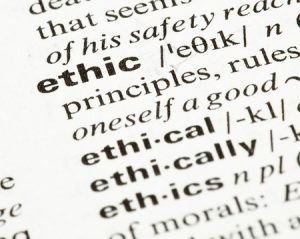 On Thursday, May 11, 2017, I submitted a Freedom of Information Act (FOIA) request to the United States Patent and Trademark Office (USPTO). My FOIA request sought a copy of any and all rules of judicial conduct, ethical policies and/or codes of professional or judicial conduct that apply to Administrative Patent Judges (APJs) of the Patent Trial and Appeal Board (PTAB).

Earlier today I received a response from the USPTO informing me that the information I requested is indexed and publicly available at the USPTO website link:

The lack of any judicial rules of conduct or ethical rules specifically tailored for judges on the PTAB is highly informative, and explains why it was possible for at least two PTAB judges to decide post grant challenges filed by former patent defense clients.

Over the last month we have written several times (here, here, here and here) about a Patent Trial and Appeal Board (PTAB) situation that, in my opinion, symbolizes everything that is wrong with a tribunal that is out of touch with reality. Prior to being hired in March 2013 by the U.S. Department of Commerce to become an Administrative Patent Judge (APJ) on the PTAB, Matthew R. Clements represented Apple as patent infringement defense counsel while working for Ropes & Gray. Since September 2014, APJ Clements has been assigned to numerous petitions, mostly CBMs but some IPRs, filed by Apple, his former client. Clements’ record in deciding cases, perhaps predictably, is tilted overwhelmingly in Apple’s favor. Similarly, APJ Stacy Beth Margolies has served as an APJ on at least two IPRs petitioned by Apple, both of which challenge patents owned by Voip-Pal.com, a developer of Internet telecommunications technologies. According to information from PACER, Margolies represented Apple as counsel in Fast Memory Erase LLC v. Spansion Inc. et. al. (ND Tex 3:08-cv-00977)(see screenshot).

It is practically unbelievable that the USPTO allows for a PTAB judge to decide petitions filed by their former patent infringement defense clients after a 1-year recusal period. See Disqualification and Recusal.  These rules absolutely must be changed. They are wholly and completely inconsistent with any sensible notion of what it means to have a conflict of interest.

The rule adopted by the USPTO to deal with ethical obligations to former clients is found at 37 C.F.R. 11.109, which reads in part:

“(a) A practitioner who has formerly represented a client in a matter shall not thereafter represent another person in the same or a substantially related matter in which that person’s interests are materially adverse to the interests of the former client unless the former client gives informed consent, confirmed in writing.”

“Matters are ‘substantially related’ for purposes of this Rule if they involve the same transaction or legal dispute or if there otherwise is a substantial risk that confidential factual information as would normally have been obtained in the prior representation would materially advance the client’s position in the subsequent matter.”

It also says: “knowledge of specific facts gained in a prior representation that are relevant to the matter in question ordinarily will preclude such a representation.”

Clearly, in defending Apple for patent infringement the attorneys would learn all kinds of confidential and sensitive information about Apple, their business and legal philosophies, how they treat patent owners, litigation strategies, whether they intend to settle or take licenses ever, whether they will engage in a war of attrition, etc. etc. There is no way that any attorney could represent a party adverse to Apple in a patent infringement matter after having represented Apple. First, Apple would never allow it. Second, there is no way you could competently represent the new client without using knowledge of confidential and sensitive information learned, period.

Had either Clements or Margolies not been a member of the PTAB and one of the patent owners in the cases they were deciding had come to seek representation in a PTAB proceeding against Apple, the conflict of interest question would have been a much easier question. Having represented Apple previously as defense counsel the duty to a former client under 37 CFR 11.109 would prevent them from representing the patent owner adverse to Apple and now charging Apple with patent infringement, which is a prerequisite to the filing of a CBM petition. Had representation been accepted on behalf of a patent owner in proceedings brought by Apple there would be a direct and irreconcilable violation of the ethics rules applicable to patent attorneys and patent agents.

Importantly, there is no time limit on a duty to a former client, at least if you are a patent practitioner. So the 1-year recusal period is wholly without precedent and inappropriate for PTAB judges.

PTAB vs. Ethics for Federal Judges

Canon 2A of the Code of Conduct for Article III Judges, under the title “Respect for Law,” says: “A judge should respect and comply with the law and should act at all times in a manner that promotes confidence in the integrity and impartiality of the judiciary.” The commentary that goes along with Canon 2A begins by tackling the issue of an appearance of impropriety. The comment, in relevant part, reads:

An appearance of impropriety occurs when reasonable minds, with knowledge of all the relevant circumstances disclosed by a reasonable inquiry, would conclude that the judge’s honesty, integrity, impartiality, temperament, or fitness to serve as a judge is impaired. Public confidence in the judiciary is eroded by irresponsible or improper conduct by judges. A judge must avoid all impropriety and appearance of impropriety. This prohibition applies to both professional and personal conduct. A judge must expect to be the subject of constant public scrutiny and accept freely and willingly restrictions that might be viewed as burdensome by the ordinary citizen.

Canon 3C of the Code of Conduct for Article III Judges, under the title “Disqualification,” reads in relevant part: “A judge shall disqualify himself or herself in a proceeding in which the judge’s impartiality might reasonably be questioned…”

The judge may participate in the proceeding if, after that disclosure, the parties and their lawyers have an opportunity to confer outside the presence of the judge, all agree in writing or on the record that the judge should not be disqualified, and the judge is then willing to participate. The agreement should be incorporated in the record of the proceeding.

Of course, a federal judge could (and perhaps should) conclude that adjudicating a matter involving a former client creates a personal bias, which creates a per se disqualification. If that is not the case, then the parties would have to be notified and given the opportunity to discuss outside the presence of the judge. If and only if all parties agree in writing can the judge continue on the case.

Thus, the rules of conduct applicable to a Article III Federal Judge are dramatically more strict than the measly 1-year recusal period the USPTO places upon PTAB judges.

PTAB judge are appointed by the Secretary of Commerce, which makes them far more than mere employees of the USPTO. They should be held to a higher standard than a generic all employees ethics policy. It is also unacceptable and completely nonsensical for APJs to have less stringent conflict standards than for the attorneys appearing before them.

President Trump campaigned on draining the swamp that is Washington, DC. Many on the left and the right have tried to do so in the past, so many are understandably very skeptical. If President Trump is at all serious about draining the swamp and preventing insiders from accessing influence, how can the Department of Commerce justify allowing hand-picked PTAB judges to hear and decide cases dealing with the interests of a former defense client?

The post grant challenges ushered in by the America Invents Act (AIA) were intended to be an alternative to district court litigation. As we have learned over the last 4+ years, many of the procedural protections Americans are used to in federal district court do not apply at the PTAB, which can for example simply decide not to consider evidence timely submitted. But a lack of a code of judicial ethics applicable to PTAB judges is a bridge too far and simply cannot be the type of district court alternative that Congress meant to create, is it?