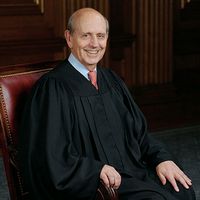 Justice Breyer delivered the opinion of the Court in Cuozzo.

In a unanimous decision delivered by Justice Breyer in Cuozzo Speed Technologies, LLC v. Lee, the United States Supreme Court upheld the United States Patent Office’s regulation requiring the Patent Trial and Appeal Board to apply the broadest reasonable interpretation (BRI) standard in Inter Partes Review (IPR) proceedings. The Supreme Court also held that the Patent Office’s decision to institute an IPR proceeding is not appealable to the Federal courts.

“The determination by the Director whether to institute an inter partes review under this section shall be final and nonappealable.”

“The Director shall prescribe regulations…establishing and governing inter partes review under this chapter and the relationship of such review to other proceedings under this title.”

The Holding in Cuozzo Speed Technologies

In evaluating the BRI standard, the Court relied on 35 USC §316(a)(4), granting the Patent Office authority to issue “regulations…establishing and governing inter partes review.” The Court interpreted this grant of authority in light of the decision in Chevron U.S.A., Inc., which held that “where a statute is clear, the agency must follow the statute.” The Court ultimately found that that §316(a)(4) is ambiguous, therefore allowing for the Patent Office to issue rules “governing inter partes review.” Finally, the Supreme Court held that the BRI regulation represents a reasonable exercise of rulemaking authority that Congress delegated to the Patent Office.

The Court, in finding that the Patent Office’s decision to institute an IPR proceeding is not appealable to the Federal courts, found that the text of §314(d) expressly states that the Patent Office’s determinations whether to institute inter partes review “shall be final and nonappealable.” The Court further held that a “strong presumption” favoring judicial review is overcome by “clear and convincing” indications that Congress intended to bar review.

EDITOR’S NOTE: Much more commentary and analysis of the Supreme Court Cuozzo decision will be forthcoming over the next several days, weeks and months. Already in the works is an article with industry reaction to the decision, which we hope to publish this evening. Stay tuned!