Hoverboard raid at CES the result of effective patent enforcement

The consumer tech world has been ablaze with a trend in personal transportation vehicles which caught America by storm during the recent holiday season. Self-balancing scooters, also known as “hoverboards” (although that’s a slight misnomer as the boards use wheels and do not actually hover), were one of the more highly sought gadgets in recent months. The conventional configuration for these scooters includes two pressure-sensitive footpads upon which an operator stands to control the movement of the wheels, one of which is disposed on either side of the unit. It could be thought of as a type of Segway transportation device without the handlebars.

Not every single electronic scooter fits this precise design mold, however. Electronics firm Future Motion Inc. of Santa Cruz, CA, has developed an innovative electronic skateboard known as the OneWheel. Instead of two wheels propelling the scooter forwards, backwards or around turns, the Future Motion device uses a single wheel positioned between the two footpads. Instead of standing straight and facing forward the way most self-balancing scooters are driven, OneWheel users ride the unit like a skateboard, with the gaze directed towards the front foot of the driver in whichever direction the scooter is being guided. According to official specifications, the OneWheel has a maximum lean angle in excess of 30 degrees, a top speed of 15 miles per hour and a range of about six or seven miles before the unit requires recharging. Owners who use the OneWheel in conjunction with an official smartphone app also have the ability to change the riding modes to more aggressive or casual driving styles.

Future Motion launched a successful Kickstarter campaign to fund the earliest prototypes of the OneWheel on January 6th, 2014. Within 24 hours, the project had already collected 40 percent of the funds it needed for the next phase of development. Within three days, it had secured 85 percent of its funding request and it only took a total of four days to reach the $100,000 pledge goal that Future Motion had initially set out to achieve. All told, Future Motion received a total in excess of $630,000 within 25 days and was able to meet stretch goals for LED lighting systems and mobile app development.

A recent post on IPWatchdog discussed an unusual event occurring at this year’s Consumer Electronics Show that played out when U.S. federal marshals arrived on the scene to seize and confiscate a knock-off version of the OneWheel being sold by Chinese firm Changzhou First International Trade (CZ-First) and marketed under the brand name Trotter. The hoverboard raid was called in response to a patent infringement action and an emergency motion for injunctive relief filed by Future Motion in Nevada Federal District Court. Future Motion alleges that the self-balancing scooter marketed by CZ-First copies the look and function of Future Motion’s Onewheel product, and thus infringing upon two patents held by Future Motion related to the technology. The injunction was filed in Nevada district court on Wednesday, a day before the CES raid was conducted.

Many readers who are familiar with the process of enforcing patent rights will note that the seizure of goods is very odd in this case. As the blog post by Merritt and R. Austin Blakeslee acknowledges, U.S. patent holders are typically not capable of earning injunctive relief from the courts because a monetary award for damages has been found adequate for relieving the full harm to the patent holder which has been caused by infringement. However, as those authors noted, this point of view held by the court tends to change when the target of the injunction is a foreign firm without operations in the United States. Even more so when the foreign manufacturer is present in the jurisdiction for a matter of days displaying what appear to be infringing devices, or knock-offs, at a trade show. In those cases, seizure may be one of the few avenues of redress available to a patent holder if the infringers assets are all overseas and cannot be easily obtained for court-ordered damages. So although the CES seizure took many media outlets by surprise, it’s not unheard of in a region where swift action must be taken before foreign infringers are able to record large sales numbers at domestic trade shows for overseas production and import. 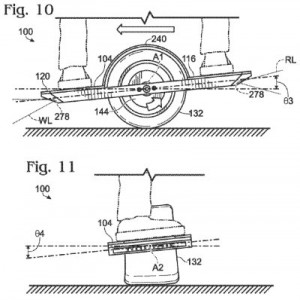 There were two U.S. patents granted to Future Motion that the company enforced in the temporary restraining and seizure orders. The electronic skateboard itself is protected by the issue of U.S. Patent No. 9101817, issued under the title Self-Stabilizing Skateboard. It claims an electric vehicle having a board with two deck portions for either foot of a rider, a wheel assembly with a ground-contacting portion between the deck portions, a motor assembly rotating the ground-contacting element to propel the vehicle, a sensor measuring orientation information of the board, a motor controller that propels the electric vehicle according to the collected orientation information and light assemblies disposed at opposite ends of the board to output light of a certain color depending on the vehicle’s direction. The patent’s description mentions that the snowboard/skateboard-style stance of the rider provides for increased safety, an important selling point 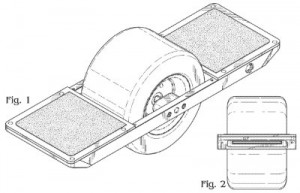 considering the large number of injuries which are being incurred from other scooter products.

The design of the electronic skateboard itself is protected by U.S. Patent No. D746928, which is titled Skateboard. It may be interesting to note that this design patent was issued on January 5th, two days before Future Motion filed its injunction. If this design patent issued one week later, it’s quite possible that Future Motion would have had a more difficult time pleading its case. This is not to suggest there is not infringement of the ‘817 utility patent, but the product being shown at CES that was seized looks virtually identical to the device shown in the ‘928 design patent issued to Future Motion.

The Trotter hoverboard raid at CES is simply the latest twist in the murky saga of hoverboards which has been playing out over the past few years. We had previously reported here on IPWatchdog about the fact that the popular IO Hawk, a two-wheeled self-balancing scooter that garnered some media attention during the 2015 CES, is very likely a rip-off of a similar product debuted in 2014 by Chinese tech firm Chic Robotics. The country of China has been pursuing a policy of supporting indigenous innovation to become a world tech power but its lack of respect for foreign IP owners, as evidenced in its rules for mandated tech transfer to engage in domestic joint ventures, is cause for concern among patent holders. The fact that a Chinese firm is charged in Future Motion’s infringement allegations is not surprising.

At the end of the day, the decision to confiscate CZ-First’s Trotter skateboard and take it away from the CES showroom floor looks more and more like a proper decision made in defense of a legitimate American intellectual property rights owner. Preventing CZ-First from selling imported Trotters also protects American manufacturing jobs as Future Motion operates its factory facility in San Jose, CA. Anyone who follows CES closely will know that product copies are typically rampant at the event, even among the biggest names like Apple, Samsung and LG. That might make it even more encouraging that a small American start-up was able to enforce its patent rights to protect its share of a rapidly growing market for personal transportation gadgets.