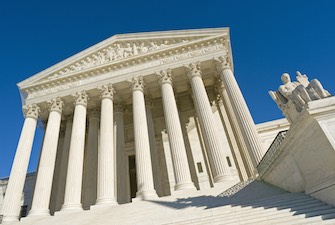 On Friday the United States Supreme Court added several cases to its docket for this term. One of those cases is Cuozzo Speed Technologies v. Lee, a case that will require the Supreme Court to address two critically important questions associated with inter partes review (IPR) proceedings. First, is it appropriate for the United States Patent and Trademark Office to use a different claim constructions standard than is used in federal district court. Second, are institution decisions insulated from judicial review.

The specific questions presented in the Cuozzo Speed Technologies certiorari petition were as follows:

1. Whether the court of appeals erred in holding that, in IPR proceedings, the Board may construe claims in an issued patent according to their broadest reasonable interpretation rather than their plain and ordinary meaning.

2. Whether the court of appeals erred in holding that, even if the Board exceeds its statutory authority in instituting an IPR proceeding, the Board’s decision whether to institute an IPR proceeding is judicially unreviewable.

In accepting the case the Supreme Court merely wrote: “The petitions for writs of certiorari are granted.” Thus, the Court has accepted both questions.

Cuozzo Speed Technologies (“Cuozzo”) is the owner of U.S. Patent No. 6,778,074, which relates to a speed limit indicator and method for displaying speed and the relevant speed limit. On September 16, 2012, Garmin International, Inc. and Garmin USA, Inc. (collectively, “Garmin”) petitioned the United States Patent and Trademark Office (USPTO), requesting institution of an IPR with respect to claims 10, 14, and 17 of the ’074 patent.

Ultimately, the Patent Trial and Appeal Board (PTAB) of the USPTO issued a final decision finding claims 10, 14, and 17 were obvious. The Board additionally denied Cuozzo’s motion to amend the ’074 patent by substituting new claims 21, 22, and 23 for claims 10, 14, and 17.  The Board rejected the amendment because (1) substitute claim 21 lacked written description support as required by 35 U.S.C. § 112, and (2) the substitute claims would improperly enlarge the scope of the claims as construed by the Board.

On appeal to the Federal Circuit Cuozzo primarily raised several issues. First, Cuozzo argued that the IPR was improperly instituted by the USPTO because with respect to claims 10 and 14 the basis for granting the petition to institute the IPR was certain prior art not raised by the petitioner. Second, Cuozzo argued that the PTAB applied the incorrect standard when evaluating the scope of the claim.

Whether the USPTO properly instituted the IPR relative to claims 10 and 14 is a matter of great importance for several reasons: (1) pursuant to 35 U.S.C. 312(a)(3), a complete IPR petition requires that petitioner identify with particularity “the grounds on which the challenge to each claim is based,” and (2) 35 U.S.C. 314(d) provides that a USPTO decision to institute an IPR is not appealable. Previously, in St. Jude Med., Cardiology Div., Inc. v. Volcano Corp., the Federal Circuit ruled that 314(d) made it impossible for the Federal Circuit review a USPTO denial to institute an IPR proceeding. The decision in this case, however, extended that ruling and holds that the Federal Circuit is without authority to review the propriety of the institution of an IPR even after the conclusion of an IPR proceeding. Thus, the USPTO has unreviewable discretion to do whatever they want with respect to instituting IPRs, even in situations where petitions are clearly defective on their face.

Writing for the panel majority, Judge Dyk, who was joined by Judge Clevenger, explained that regardless of whether the USPTO properly should have instituted an IPR, the decision of the USPTO could not be reviewed or challenged even after a completed IPR proceeding. Dye wrote:

Another issue raised by Cuozzo related to whether the PTAB should, when construing a claim in IPR, rely on the traditionally applied standard applied to review of applications, namely the “broadest reasonable interpretation” standard, or whether the more narrow standard applied by the district courts should be utilized. Not surprisingly, Judge Dyk found that the broadest reasonable interpretation standard is appropriate. He wrote:

There is no indication that the AIA was designed to change the claim construction standard that the PTO has applied for more than 100 years… Congress in enacting the AIA was well aware that the broadest reasonable interpretation standard was the prevailing rule. It can therefore be inferred that Congress impliedly adopted the existing rule of adopting the broadest reasonable construction.

Judge Newman participated in the decision and filed a dissent. The dissent is not a scathing indictment of the majority, but Newman does in a matter of fact manner explain that the majority is wrong. Newman makes a compelling argument with respect to the broadest reasonable interpretation standard, saying that by applying that standard to IPRs the Court if fundamentally dishonoring the intent of the statute in creating post grant review procedures.

Newman explained that the AIA created IPRs in order to provide a lower cost, quicker alternative for defendants to challenge the validity of patent claims. In order for IPR to operate as a surrogate to the more time consuming and costly patent litigation that occurs in district courts the PTAB must apply the same standard as used in the district courts. She explained:

This purpose was achieved by providing a new adjudicatory proceeding in the administrative agency, the Patent and Trademark Office in the Department of Commerce, whereby a newly formed Patent Trial and Appeal Board (PTAB) serves as a surrogate for district court litigation of patent validity…

[T]he panel majority authorizes and requires treating the claims of an issued patent in the same way as pending claims in the patent application stage, where claims are subject to the “broadest reasonable interpretation” examination protocol. The panel majority thus precludes achieving review of patent validity in Inter Partes Review comparable to that of the district courts, where validity is determined based on the correct claim construction, not an artificially “broadest” construction…

Ultimately, Judge Newman concluded that it is impossible for the USPTO to “serve as a surrogate for district court litigation if the PTAB does not apply the same law to the same evidence.”

Judge Newman was equally troubled by the fact that the panel majority has rendered the Federal Circuit incapable of reviewing USPTO decisions to institute IPR proceedings, which would effectively insulate the Office from any review and thereby allow the Office to disregard the statute, which they seem to have clearly done here with respect to claims 10 and 14. Newman asked: “Does this mean that such decisions can never be judicially reviewed, even if contrary to law, even if material to the final appealed judgment?” In answering her own question she wrote: “This ruling appears to impede full judicial review of the PTAB’s final decision…”

While 314(d) does clearly say that the decision to institute a review is not appealable, interpreting that to mean that no court could everreview the decision as part of its review of a final decision effectively means that an agency decision to institute a process to strip away vested property right is immune from review by an Article III court. This is particularly troublesome given that the property right at issue here is of Constitutional importance given that patents are specifically mentioned and authorized in the Constitution itself, not a document known for its length or specificity.

Even if Congress intended to forever insulate initiation decisions from judicial review, such an intention would seem to clearly violate at least the spirit of the bedrock Constitutional principles that ensure checks and balances between and among co-equal branches of government. If Congress could do this here with patent rights then why couldn’t Congress prevent judicial review of decisions relating to real property? The interpretation of Judges Dyk and Clevenger is unprincipled, not bounded and fundamentally dangerous.

With respect to claim construction, time and time again throughout the legislative history of the AIA post grant proceedings were explained as being a faster, low-cost alternative to litigating validity disputes in Federal District Court. See Patent Abuse of Genius. That being the case, it would seem extremely odd that district court alternative to challenging the validity of an already issued patent would use a lower standard with which to construe the patent and offer no presumption of validity.

If the challenge to validity were to take place in the federal district court the patent would be presumed valid and the Philips standard would be applied, which would narrowly construe the claims. Instead, the PTAB provides no presumption of validity and uses the broadest reasonable interpretation of the claims, both of which make it much easier to invalidate the claim in question.

Simply stated, use of BRI and providing no presumption strips the already issued patent of key protections the patent, a property right, would enjoy in federal district court. Why? Disparate treatment in what was supposed to be a district court alternative is impossible to justify in any fair way. The only way the USPTO justifies this disparate treatment is to say that is how they have always done things. That it has always been done wrong it hardly a justification for continuing to do it wrong moving forward.