Was Thomas Edison a Patent Troll? 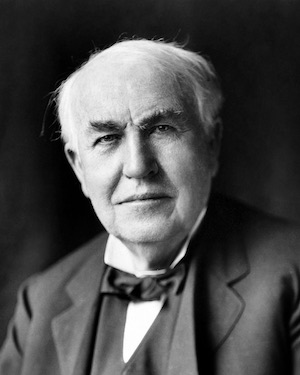 Thomas Edison, perhaps the greatest US inventor. Circa 1922.

To hear some people tell it, Thomas Edison was nothing but a scurrilous “patent troll.” That, at least, is the impression given in a recent article in Corporate Counsel magazine entitled ITC Rolls Out the Welcome Mat for Trolls that equates technology licensing with patent trolling.

The issue at the heart of the article was a recent decision by the International Trade Commission (ITC) reaffirming its long-standing policy of allowing firms that license rather than manufacture their own technology to enforce their patent rights before the ITC and seek injunctions barring the importation of infringing products into the U.S. In its article, Corporate Counsel singled out Tessera, a $300 million technology development and licensing firm, as one of the companies involved in this decision. But by using the terms “licensing firms” and “patent trolls” interchangeably, the magazine also implied that Tessera itself was a “patent troll.”

Nothing could be further from the truth. Tessera develops and licenses miniaturized technologies that enable electronic devices — such as cell phones, computers and cameras — to be smaller and less expensive. The company also manufactures and sells products based on its technology worldwide. Tessera operates two manufacturing facilities, spends $65 million a year on R&D, and employs 470 people — more than 60 percent of whom are technologists.

But more important than the misrepresentation of Tessera, the article does a disservice to its readers by confusing the harm sometimes caused by “patent trolls” with the beneficial role played by licensing firms (sometimes referred to as “non practicing entities,” or “NPEs”) in American technology development and economic growth.

For it turns out that it was precisely the ability of American innovators to specialize in invention while leaving manufacturing and sales to others that enabled the United States to develop one of the most innovative and successful economies in the history of the world.

At the time of our nation’s birth, those who led the revolution and were tasked with writing the Constitution struggled not just with creating lasting political structures that could defend the hard-won freedom and sovereignty of the newly-liberated colonies. They were equally concerned with finding some way of stimulating the rapid growth of American industry and commerce so as to ensure the new nation’s economic survival.

And make no mistake: the survival of the United States was far from certain in those days. Ours was a backward agrarian economy, dependent on imports and lacking significant domestic industry, with a population of barely three million inhabitants. Britain, meanwhile, with whom we had just fought a war and would soon fight another, had three times our population, boasted the most powerful economy on earth, and was the leader of the emerging industrial revolution.

All America had, other than abundant but untapped natural resources, was a population unique in the world for its prolific, independent, and enterprising character. Ours was the world’s fastest-growing population, doubling in size every 20 years. But more importantly, unlike the tenant farmers and laborers that made up the bulk of England’s rigid class society, the vast majority of Americans were free-holding small farmers, merchants, shopkeepers, artisans and mechanics — the forerunners of what we today call the middle class — who were possessed of what publisher Hezekiah Niles called at the time “a universal ambition to go forward.”

This was our key asset, our ace in the hole. And founders like George Washington, Thomas Jefferson and James Madison knew they had to find some way to stimulate the creative and productive potential of this mass of independent citizens if America was to survive.

As Jefferson wrote to his daughter Martha in 1787, it was precisely because America was bereft of Europe’s vast resources and left to its own devices that “we are obliged to invent and execute; to find means within ourselves, and not to lean on others.”

But how to do that? The historical record demonstrates that the founders very deliberately (the economic historians B. Zorina Khan and the late Kenneth Sokoloff say “quite self consciously”) designed the American patent system to do what no other patent system in the world had ever done before — namely, stimulate the inventive genius and entrepreneurial energy of the common man.

They did this first of all by introducing for the first time in any nation’s constitution an intellectual property clause that recognized the rights of inventors. But the real genius of the founders lay in the way they enabled this fundamental right to manifest itself in everyday life.

The first patent law passed by Congress on April 10, 1790 set patent fees at a level that any ordinary citizen could afford. Initially the fee was $3.70, but three years later it was raised to $30 — an amount that was still less than 5 percent of the rate in Britain, where patent fees were 10 times the per capita income of its citizens. And patent fees remained $30 for the next 70 years, ensuring that the patent system remained open to all citizens during the industrial revolution.

The results were unprecedented. Whereas most of Britain’s handful of inventors came from wealth and privilege — who else could afford to engage in inventive activity? — most of America’s many thousands of inventors came from humble beginnings. They were farmers, factory workers, merchants, mechanics, and carpenters and other artisans for the most part.

Indeed, of the 400 iconic “great inventors” of the nineteenth century, more than 70 percent had only a primary or secondary school education, and half had little or no formal schooling at all. Moreover, many of the most famous names in American invention — men such as Matthias Baldwin (locomotive), George Eastman (roll film), Elias Howe (sewing machine), and Thomas Edison (electric light and phonograph) — had to leave school early to support their families.

But perhaps the most crucial element of the American patent system was that it did not simply encourage ordinary people to participate in inventive activity. It made it economically feasible for them to do so. By creating a market in which inventors with little or no capital could license their discoveries to enterprises that could then commercialize them, the patent system enabled unprecedented numbers of ordinary people to generate income from invention and thereby make it a full-time career. Which naturally generated even more innovation.

And remember, before the emergence of in-house corporate R&D departments in the early 20th century, patent licensing was the name of the game.Throughout most of the 19th century, announcements of new patented discoveries were placed in publications such as Scientific American that were expressly founded for the purpose of disseminating information about patents. Commercial enterprises would then license or purchase these patented inventions and use them in their product development. In 1894, for example, American Bell Telephone Company’s R&D department licensed 73 patents from outside inventors, developing only 12 inventions from its own employees.

Thomas Blanchard was a typical inventor-licensor. He was the son of a small farmer who invented and patented a mechanical tack-maker in 1806 that could fabricate five hundred tacks per minute, each superior to tacks made by hand. He sold the rights to his machine for $5,000, quite a sum in those days. He then invented a lathe to produce uniform gun stocks, and the patent he received for it enabled him to attract investors for the production of those gun stocks for the local Boston market. But Blanchard also leased the rights to this invention to gun producers nationwide, as well as to manufacturers of tool handles and wheel spokes. The income he generated from patent licensing enabled him to make inventing his full-time career, and he went on to invent a wood bending machine, an upriver steamboat, and a steam wagon that was used until the introduction of railroads in the U.S. He received a total of 25 patents during his career.

According to economists Khan and Sokoloff, patent licensing “made it possible for creative individuals to specialize more fully in inventive work.” And this, they say, in turn produced “higher rates of productivity in the generation of new technological knowledge.”

Patent licensing, in fact, offered a perfect proof of Adam Smith’s axiom that specialization and the division of labor leads to greater productivity and economic growth.

Only 13 years after the first patent law was enacted, America’s per capita patenting rate had already surpassed Britain’s, and we were generating more new patented inventions than our old colonial master, even though Britain still had twice our population.

By 1860, the number of new inventions patented in the United States was an astonishing seven times the number in Britain, although our populations were by then roughly equal in size.

All of which makes the opprobrium heaped upon licensing firms by the big tech companies today rather ironic. They can say all they want about NPE-initiated patent litigation being out of control, but the fact is that the patent litigation rate was actually far higher in the 19th century than it is today. Yet this did not seem to slow the industrial revolution any.

In fact, the industrial revolution never would have happened had it not been for NPE inventors like Thomas Blanchard and Thomas Edison who licensed most of their technology rather than commercialize it themselves. Patent assignment records show that that an astonishing two-thirds of all of America’s “great inventors” of the 19th century were actually NPEs.

There was nothing pre-ordained about our economic success, no special “Yankee ingenuity” trait in our genetic stock. What made America the most innovative and prosperous nation on earth was a uniquely-democratic patent system that enabled large numbers of ordinary citizens without wealth or access to capital to get involved in invention.

Patent licensing was their ticket to the American Dream.

David Kline David Kline was a Pulitzer-Prize-nominated journalist, author, and communications strategist who had consulted for many of the most important IP-focused firms in the world. His journalism appeared in the New [...see more]