“It seems that the prevailing view, both at the PTO and among some patent attorneys, is that patents on nonexistent and impossible inventions are mere curiosities—unfortunate, but ultimately harmless. But the recent assertion of the Theranos patents offers stark evidence to the contrary.” – Jorge Contreras 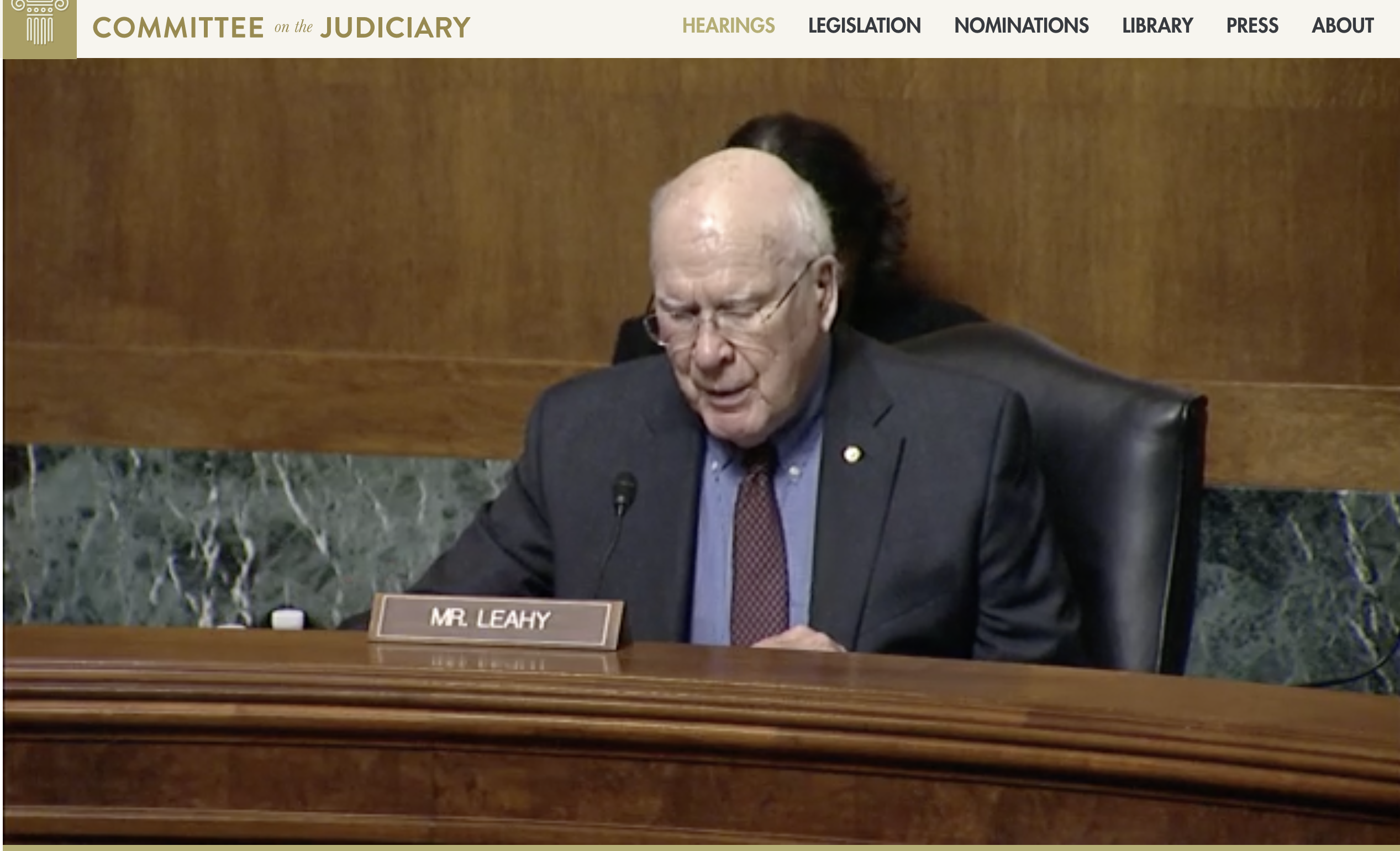 The Senate Judiciary Committee’s Subcommittee on Intellectual Property on Tuesday heard from four witnesses on the topic of “Protecting Real Innovations by Improving Patent Quality.”

The topic has been addressed by the Senate IP Subcommittee before, and long-debated in patent circles generally. Under the leadership of its new Chairman, Senator Patrick Leahy (D-VT), the Subcommittee now seems to be revisiting the conversation and looking for practical fixes.

Leahy opened the hearing by making reference to an experience Vermont had in 2013, when out of state companies targeted nonprofits and small businesses with letters alleging infringement of patents that purported to describe inventions covering a typical office network with a server, computers running outlook, and a scanner that permitted scanning a document directly to an employee email address. The letters sought license fees of $1,000 per employee, which could be debilitating even for a small business. About 75 Vermont businesses were targeted in all. As a result, Vermont eventually passed legislation targeting bad faith patent assertions.

Leahy also mentioned the “disturbing story” of patents originally owned by the disgraced Elizabeth Holmes of Theranos that were sold to a holding company and eventually asserted against “actual inventors and innovators working on steps that can be taken to curb COVID-19,” Leahy said. He continued:

Here we have the whole world scrambling to respond to a pandemic and the solution was nearly blocked by patents for a fake invention. When we think about patent quality, we should keep in mind that 52% of U.S. patents are issued to foreign entities. But we don’t know how many patents are owned by foreign entities because the PTO doesn’t require that the patent owner tell the public the patent was sold. There’s a real risk that companies build portfolios of poor-quality patents to stifle American innovators. 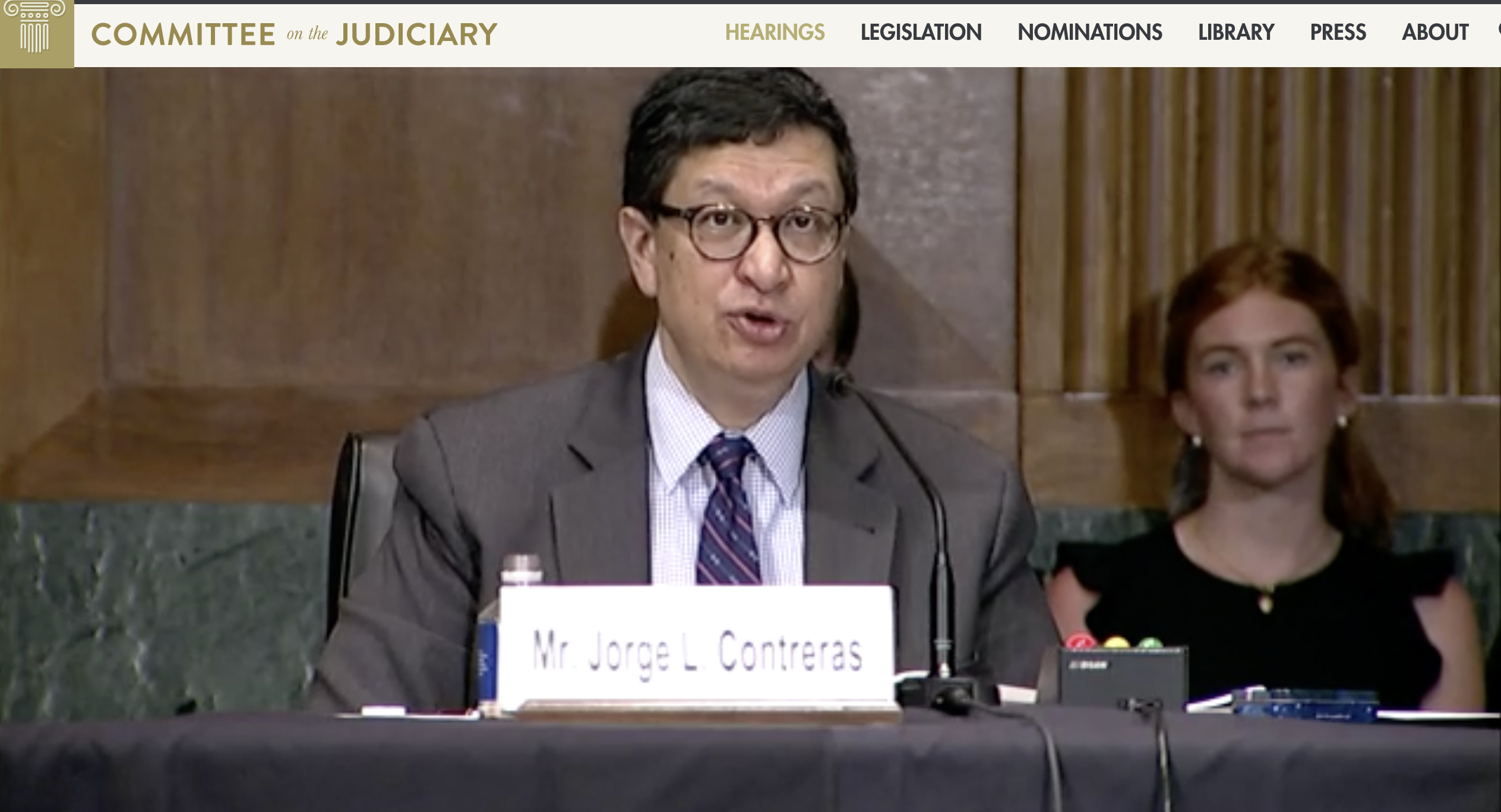 The COVID-19 suit Leahy and witness Jorge Contreras of S.J. Quinney College of Law, University of Utah, discussed was between Fortress Investment Group/ Labrador Diagnostics LLC and BioFire Diagnostics/ Biomerieux for infringement U.S. Patent No. 8,283,155 and U.S. Patent No. 10,533,994, two of 1,000 patents which were acquired by Fortress Investment Group from Theranos. Whether Leahy’s and Contreras’ characterization of that situation is accurate, or if Labrador was suing on patents unrelated to COVID, has been debated. But the Senators and panelists questioned whether patents for inventions that were never practiced and found to essentially be fraudulent should ever have issued in the first place—particularly in the case of one of the patents, which was issued two years after Holmes was indicted. Contreras explained:

Theranos never finished developing the tests that it sold to Walgreens and others for millions of dollars… Holmes, the lead inventor on both patents, is currently under federal indictment for multiple counts of criminal conspiracy and fraud…. More than a few issued patents cover inventions that were never made or at least never worked….It seems that the prevailing view, both at the PTO and among some patent attorneys, is that patents on nonexistent and impossible inventions are mere curiosities—unfortunate, but ultimately harmless. But the recent assertion of the Theranos patents offers stark evidence to the contrary.

Contreras then provided examples of what can go wrong: a bad patent can act as prior art; the holder can enforce the patent against others who are more successful at developing the technology; even if eventually invalidated in court, litigation is costly and many will settle leaving the bad patent on the books, etc.

To ward off bad patents, Contreras suggested the following solutions: 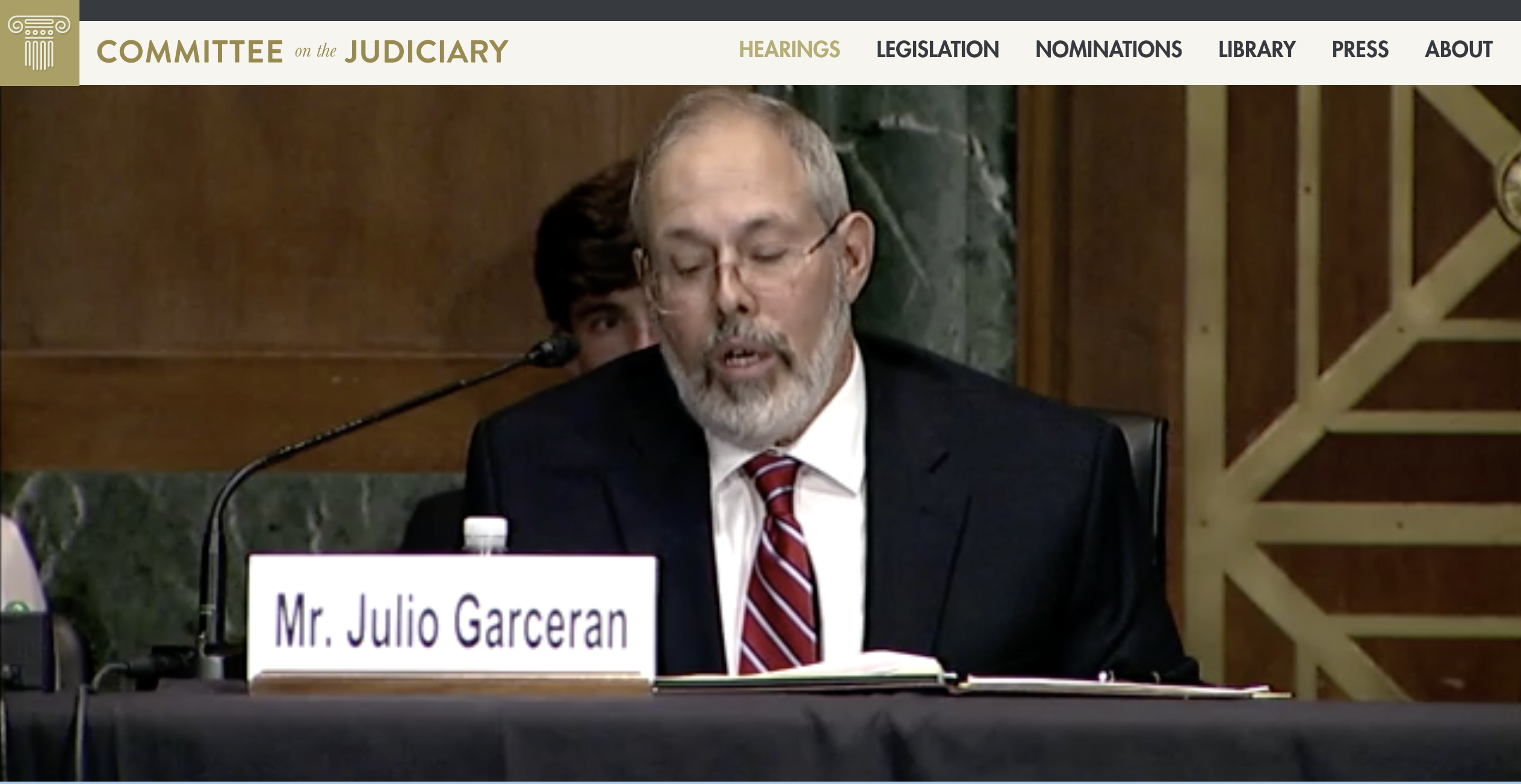 Other panelists focused more on improving and increasing the use of 35 U.S.C. Section 112 in examination. “Section 112 rejections are generally considered non-substantive and are not pushed at all during prosecution,” said Julio Garceran, Chief Intellectual Property Counsel at Cree, Inc., a compound semiconductor company based in Durham, North Carolina.

Garceran testified that “low quality patents are a business” and said that the high cost of patent litigation can create an incentive to burden the competitor with increased spending that could be better spent on R&D. He suggested that: 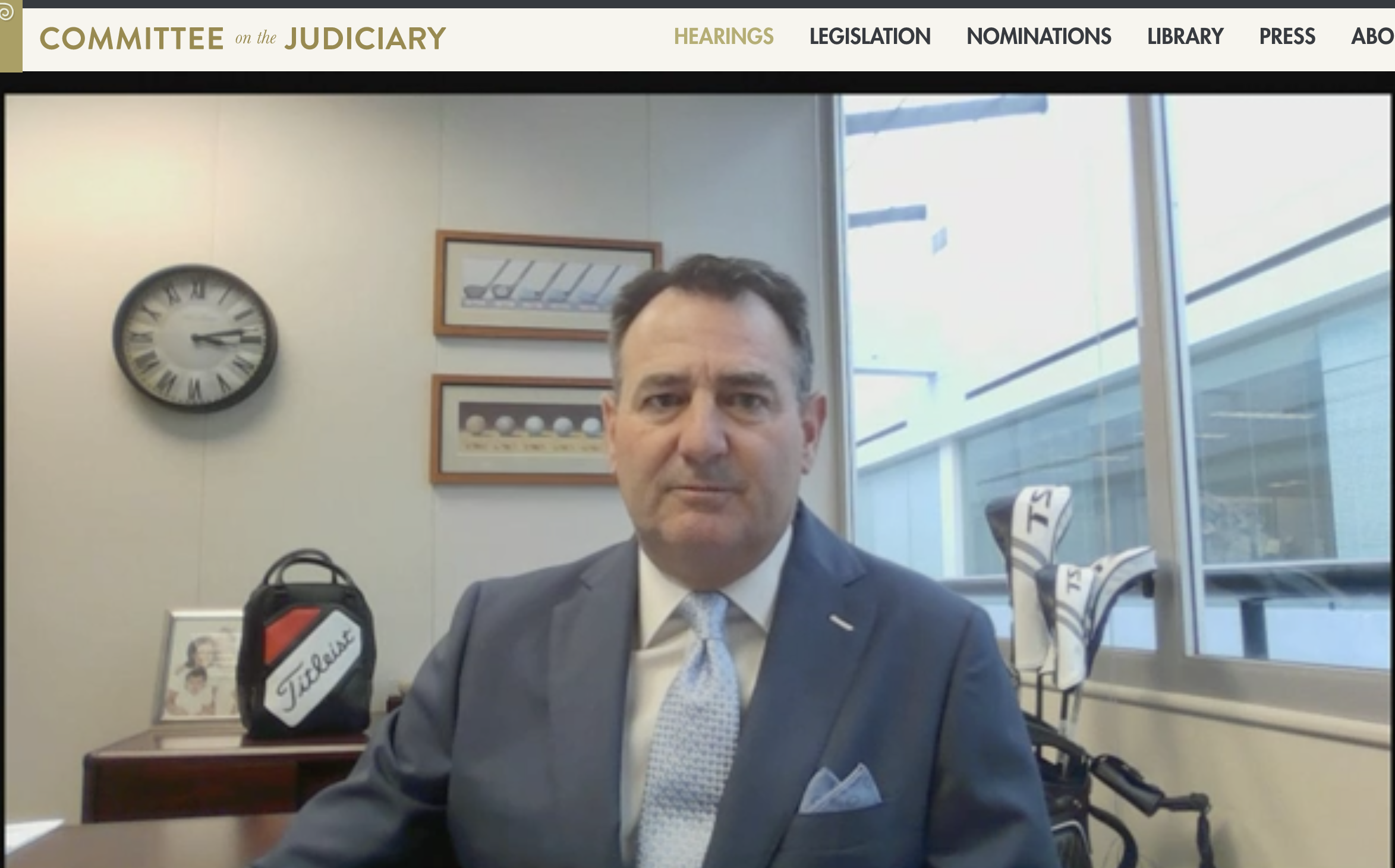 Troy Lester of Acushnet agreed with Garceran about improving 112 examination practices, and explained that “litigation abuse only addresses half the problem of overly broad patents.” Often, bad patents stifle innovation without ever being asserted because they create barriers. “We recently cancelled a multi-million-dollar order made by another U.S. manufacturer because of an invalid patent issue,” Lester said. For his part, he said that the following steps can be taken to fight bad patents: 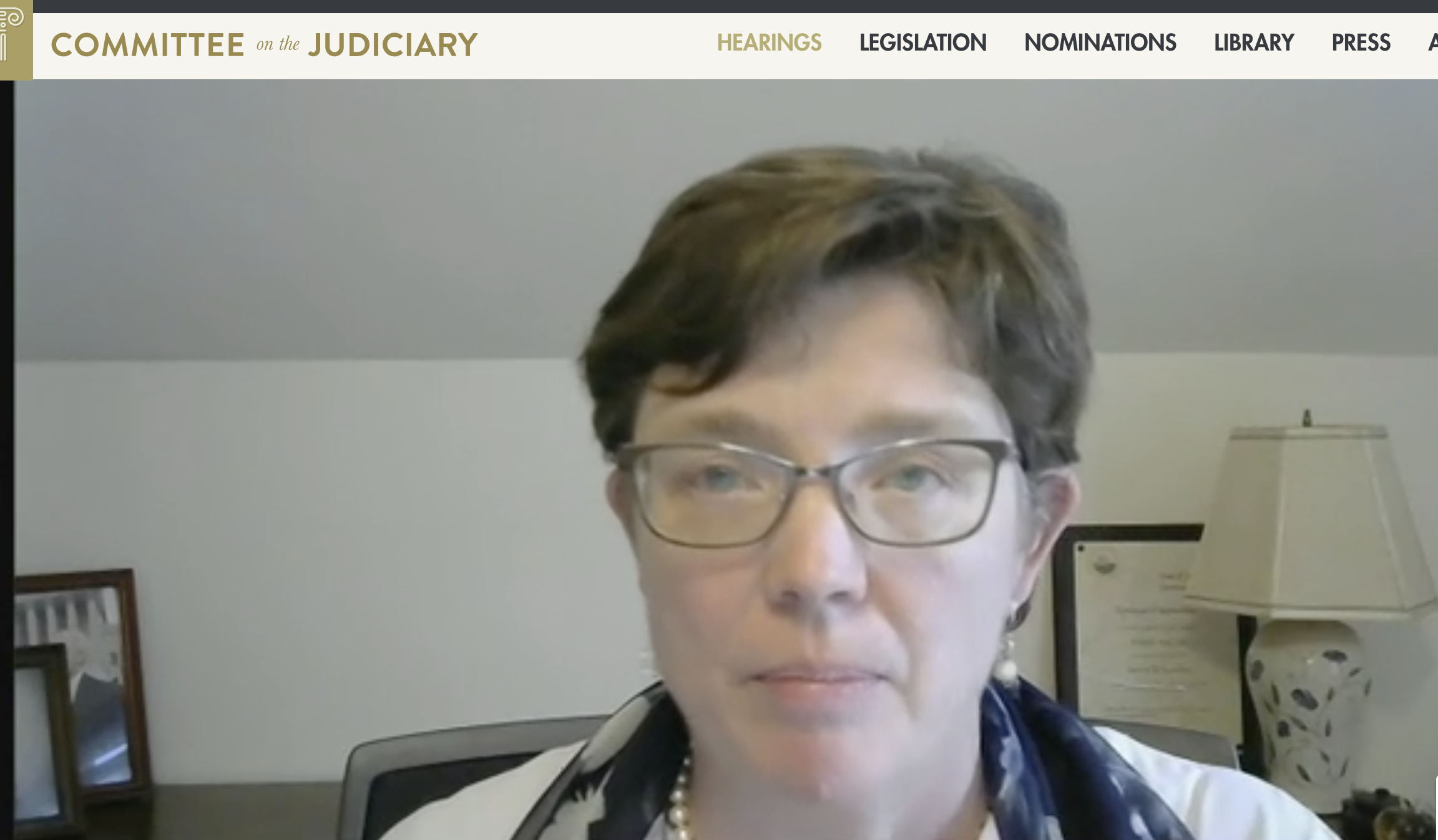 Bridget Asay, a partner at Stris & Maher in Vermont who formerly worked with the Vermont Attorney General’s office, testified about the litigation abuse described by Leahy in his introduction. She said that transparency would go a long way toward helping the problem, since it was not easy even for the Attorney General’s office to find out the status of the patents being asserted or the identity of the patent owners.

So Seven Years Ago 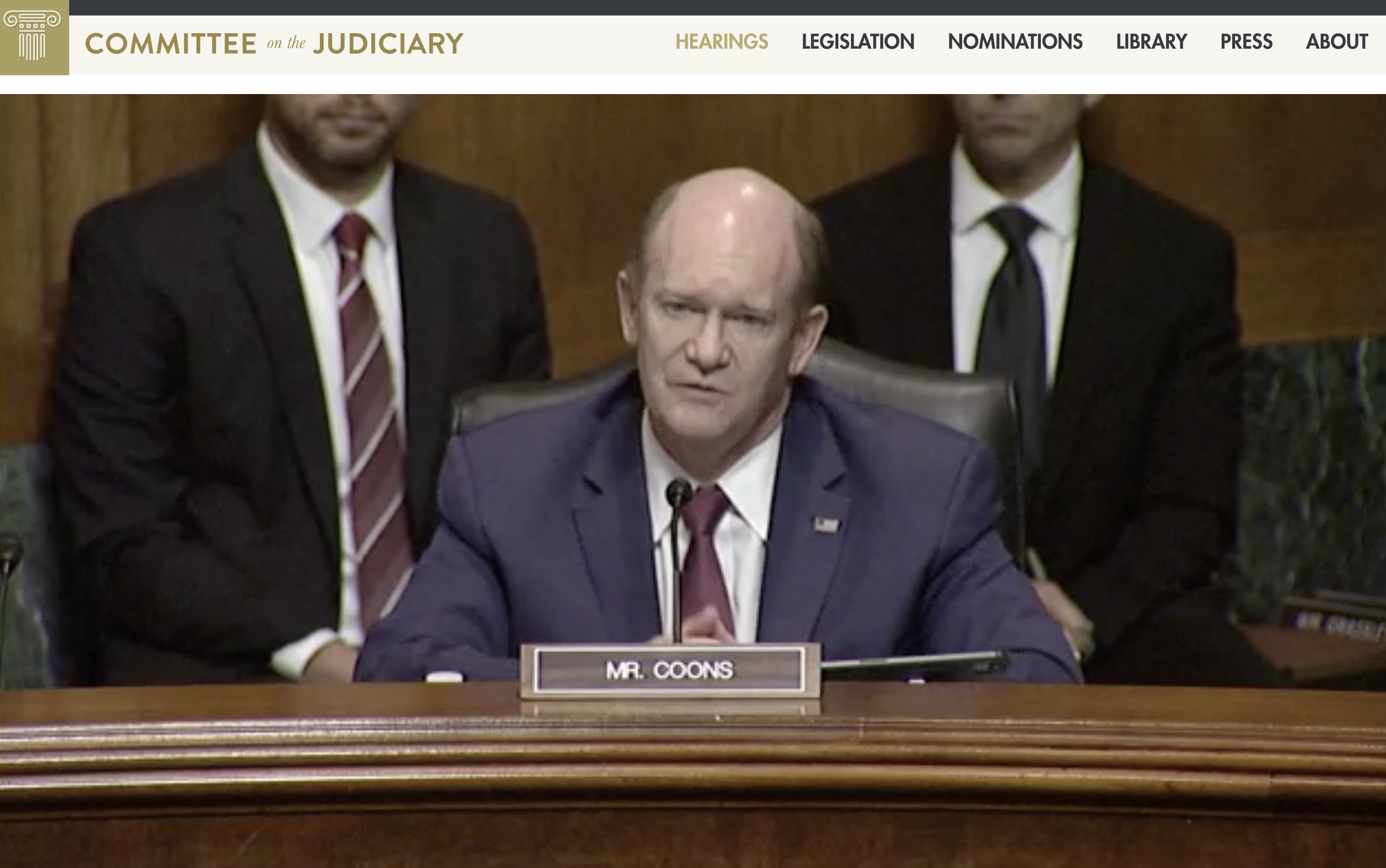 Both Senators Chris Coons (D-DE) and Mazie Hirono (D-HI) voiced concerns about overstating the patent troll problem to the detriment of legitimate patent owners. “I do want to make sure that the pursuit of patent quality as such is not used as an excuse to weaken patent enforcement protections for all patent owners,” Coons explained. He also pressed Asay on whether she was aware of a problem with demand letter practice today, as opposed to 7-8 years ago when the incident in Vermont took place. She provided one recent example in which the Washington Attorney General is suing a patent troll for violating the state’s “Patent Troll Protection Act,” but did not have other direct experiences to share. “I, too, heard a lot about this 7-8 years ago, but I think there have been significant changes and shifts in law and practice that have largely addressed it,” Coons said. 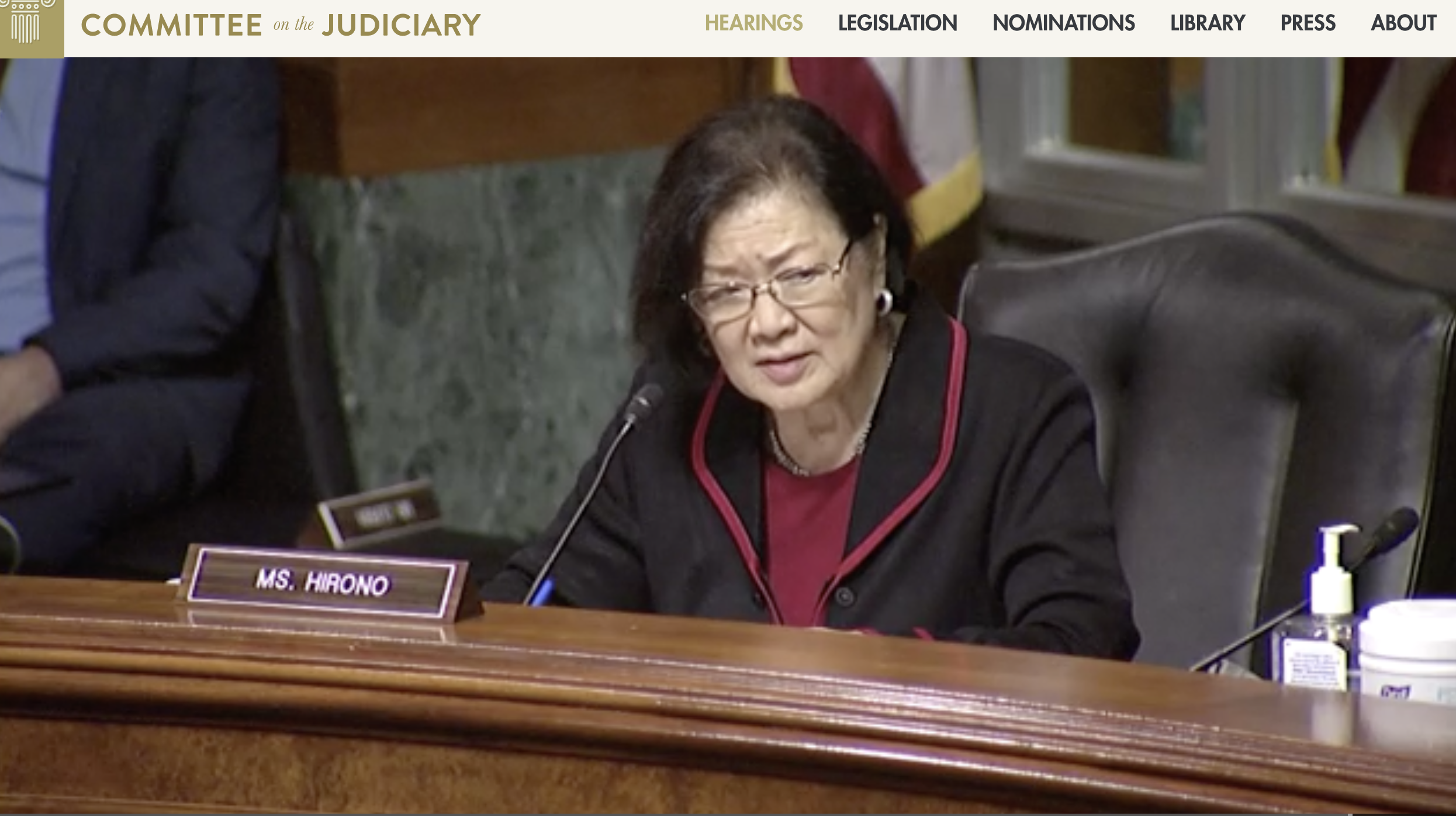 Hirono raised the specter of the Patent Trial and Appeal Board (PTAB), prefacing her comments by saying that “too often, efforts to address claims of bad patents weaken patent rights.” She asked the patent attorneys on the panel what their experience has been with the PTAB, since she has heard from many small inventors who are “abandoning the patent system” because of this. Both Lester and Garceran said that they think the PTAB is working now, and Lester opined that serial inter partes review (IPR) petitions stem from serial litigation: “What I believe is happening is when an entity files 300 litigations, they will have a lot of IPRs filed against them. If they file one litigation, they’re going to end up with one IPR – and if the patent is valid it’s going to survive the IPR. It might not even get initiated, and I think that’s the way the system was intended to work.”

Hirono also asked if legislation would be necessary to implement changes in the USPTO’s Section 112 examination standards. Lester and Garceran agreed that, while more explicit guidelines may be needed, the Office has the capability to do it. “It just needs to be part of their process,” Lester said. 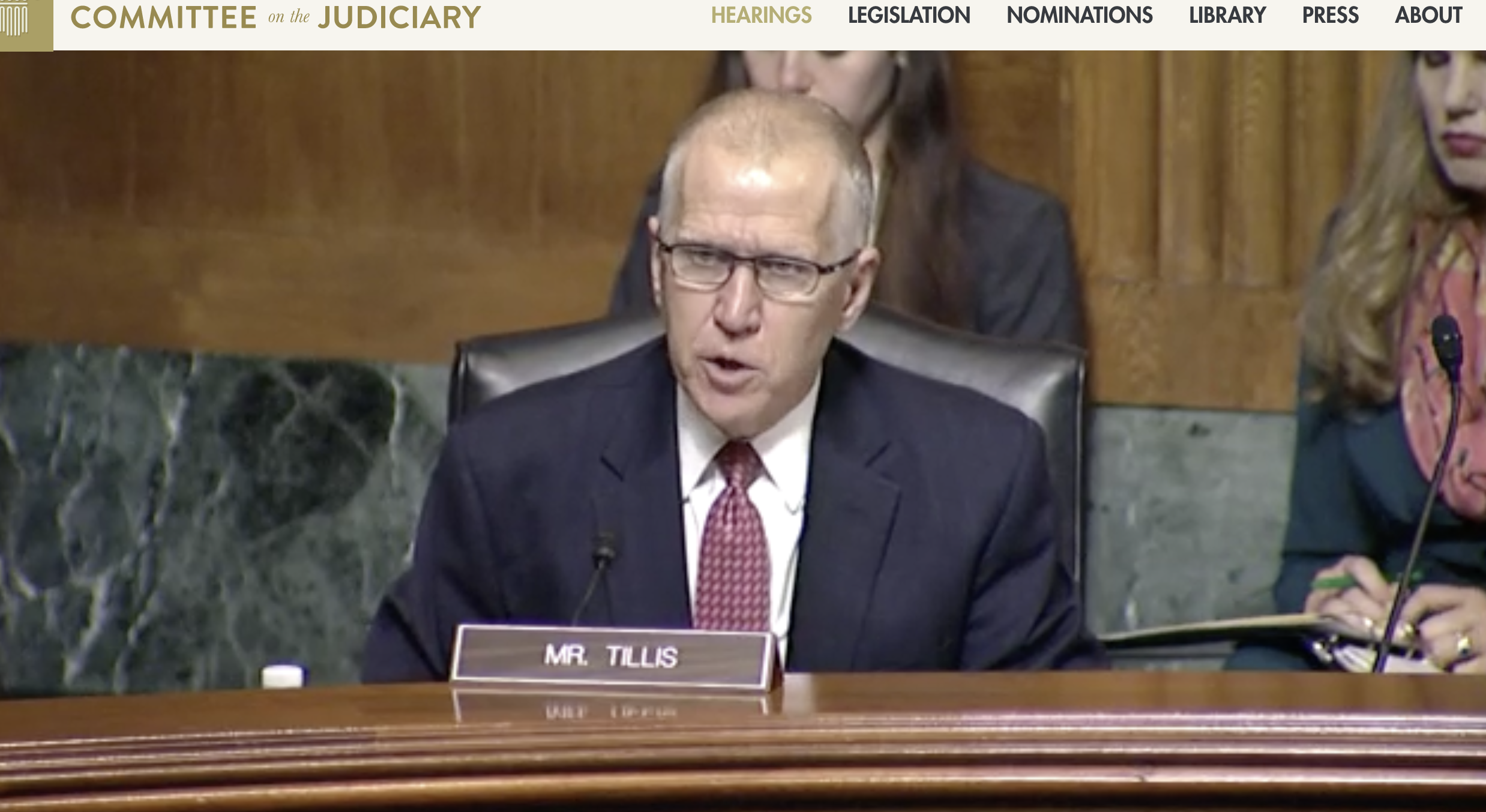 The IP Subcommittee’s Ranking Member, Senator Thom Tillis (R-NC), also focused his solutions on improving Section 112 examination practices. “There are simply too many overbroad patents being issued, especially in software and financial services spaces,” Tillis said. He also suggested eliminating fee diversion and the introduction of a so-called gold-plated patent, which “would undergo a more rigorous, more costly examination process to make sure it is truly new, innovative and properly scoped,” but in exchange would be “virtually impossible to challenge.”