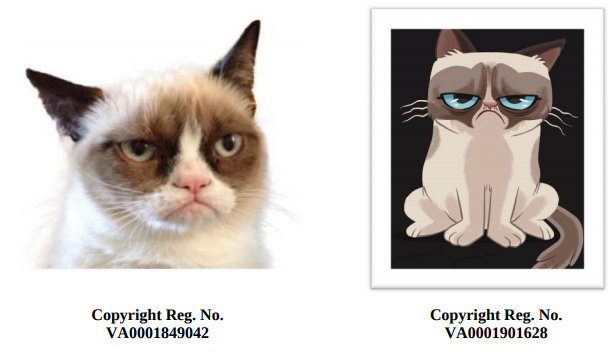 On January 23rd, a jury verdict entered in the Central District of California awarded $710,000 in damages for trademark and copyright infringement to Grumpy Cat Limited, the entity holding the rights to the Internet cat celebrity Grumpy Cat. The lawsuit targeted the sale of unlicensed coffee beverages marketed under the Grumpy Cat name by a Los Angeles-area beverage company.

The complaint filed in December 2015 notes, the firm entered into a license agreement with Grenade Beverage in May 2013, which granted Grenade limited rights to the copyrights and trademarks covering the cat’s name and image to develop a line of branded coffee products. The complaint alleges that it was understood between both parties that the agreement was limited to a single line of ice coffee products to be branded as Grumpy Cat Grumppuccino.

Plaintiff learned in late 2015 that Grenade was intending to breach the terms of the license agreement by developing a line of ground coffee products under the Grumpy Cat name. Despite being informed numerous times that they did not have the approval to pursue the additional line of coffee product under the Grumpy Cat brand, Grenade began to market and sell a Roasted Coffee product with packaging that leveraged the Grumpy Cat copyright and trademark IP, which Grenade advertised over social media channels including Twitter, Instagram and Facebook, as well as through the website drinkgrumpycat.com. 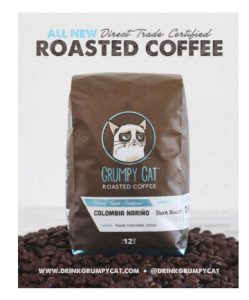 The original complaint also included a cybersquatting claim, alleging that Grenade had obtained the rights and ownership to the Internet domain grumpycat.com for the purpose of furthering the unauthorized use and exploitation of the Grumpy Cat copyrights and trademarks. Other examples of Grenade’s breach of the license agreement include failing to provide any detailed monthly accounting statements, failing to pay royalties for existing sales of the branded Grumppuccino, failing to form a California limited liability company under the Grumpy Beverage name and selling Grumppuccino T-shirts, which exceeded the limited scope of the agreed upon ice coffee product line.

Early last December, the plaintiff scored a victory when the federal judge in the case entered a summary judgment finding that Grumpy Cat had not breached the license agreement between it and Grenade Beverages. Grenade had argued that Grumpy Cat violated the agreement by refusing to approve the ground coffee products.

The jury verdict entered about a month and a half later found both Grumpy Beverage, the Grenade subsidiary, as well as one of its principals liable for copyright and trademark infringement. Grumpy Cat was awarded a total of $480,000 in statutory damages for trademark infringement and $230,000 in statutory damages for copyright infringement. The jury also found against various commercial claims brought in counterclaims filed by Grumpy Beverage including no breach of covenant of good faith and fair dealing, no breach of fiduciary duty, no negligent misrepresentation and no intentional misrepresentation.