USPTO denies permit to US Inventor for PTAB protest 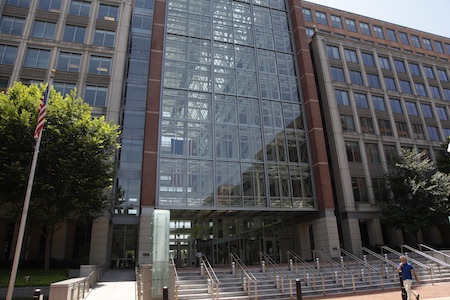 This Friday, August 11th, US Inventor, a nonprofit organization devoted to improving the U.S. patent system, had planned on staging an event at which the organization would both recognize high quality patent examination as well as stage a peaceful protest of the Patent Trial and Appeal Board (PTAB). However, a decision by the U.S. Patent and Trademark Office to not approve the event is leaving protesters in jeopardy and may result in patent owners being put in jail.

On Tuesday, August 8th, US Inventor received a phone call and an e-mail from Charles Fanshaw, Director of the Office of Administrative Services at the USPTO, which laid out three grounds for not approving the use permit application. The USPTO contends that approval of the use permit application would disrupt official business of the USPTO within its buildings, that booth/table set-up within USPTO facilities is limited to instance where doing so furthers an agency objective or program, and that any use of the USPTO is limited to cultural, educational and recreational activities. US Inventor argues that each of these grounds is erroneous under the First Amendment for denying the use permit. “While the views of US Inventor may be different than, or in tension with, the views of the USPTO, that difference of opinion is no basis to deny US Inventor’s use permit application,” the August 10th appeal letter reads.

“The USPTO does not believe in property rights or the First Amendment either,” said Josh Malone, Fellow with US Inventor. According to Malone, several dozen inventors are either in transit to Washington, D.C., or have already arrived to take part in the US Inventor event. “There’s no question that we’ll be heard.”

Given the denial of the use permit application, there seems to be some question as to whether or not U.S. patent owners will be arrested tomorrow for burning their patents as a symbolic and peaceful protest of the activities of the USPTO, particularly those within the PTAB. Inventors, as well as many others in the innovation community, feel the PTAB and the post grant procedures ushered in by the America Invents Act (AIA) have made their patents worthless anyway, which is hard to argue when well over 90% of patents challenged are found defective. Indeed, former Federal Circuit Chief Judge Randall Rader dubbed the PTAB a “death squad,” which then PTAB Chief Judge James Smith saw as a badge of honor.

Patents rights are currently be extinguished by the PTAB without appropriate procedural fairness afforded. The PTAB refuses to consider evidence timely submitted, they refuse to allow amendments despite the statute saying there is a right to amend claims, they refuse to issue final decisions on all claims challenged, they have made their own standards rather than follow statutory requirements, there are no judicial rules of ethical conduct for PTAB judges, PTAB judges have decided issues involving former patent infringement defense clients, and much more. It is difficult to believe a tribunal like this exists in America. The Supreme Court has long stated patents are property rights, and the statute says they are to be treated as they are property rights. Taking property rights away with such a fundamentally flawed process is practically un-American.

The decision of the United States Patent and Trademark Office to deny the permit and effectively prohibit the protest will undoubtedly strike some, perhaps many, as un-American as well. The First Amendment, however, does not provide an absolute rights for citizens to protest however they want wherever they want. While the symbolic burning of the patents would send a very strong message that element of the planned protest may be what lead to the USPTO’s denial. It would, however, have seemed appropriate for that to be conveyed to US Inventor.

The USPTO has to know that a great many within the innovation community are deeply unhappy with the PTAB. While the protest as planned may raise some legitimate concerns it would be prudent for the USPTO to work with US Inventor and the independent inventors who have arrived in Alexandria, Virginia to find a way for them to publicly voice their concerns.