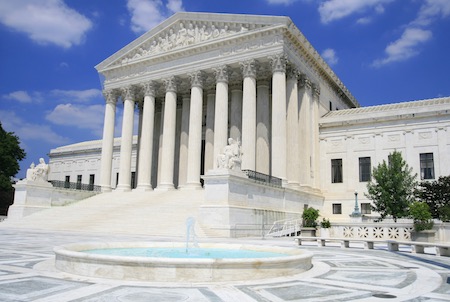 On Monday, May 22nd, in addition to deciding the much-anticipated patent venue case TC Heartland v. Kraft, the U.S. Supreme Court granted a petition for writ of certiorari, which means that the nation’s highest court will once again address issues surrounding the controversial Patent Trial and Appeal Board (PTAB) of the United States Patent and Trademark Office (USPTO). The case it will decide is SAS Institute, Inc. v. Lee, which will be argued during the October 2017 term, and which will force the Court to again look at how the USPTO, and more specifically the PTAB, is implementing the post-grant patent validity trials created when Congressional passed of the America Invents Act (AIA) of 2011.

“The question presented is nothing less than this: Who makes the laws in this country—the National Legislature or an executive agency?” Thus explains the reply for petitioner SAS Institute filed in this case. Melodramatic perhaps, but not incorrect. The law as written couldn’t be any clearer, yet the PTAB does not issue final written decisions with respect to all of the claims challenged by petitioners.

SAS Institute is appealing a decision issued last June by the U.S. Court of Appeals for the Federal Circuit in which the Federal Circuit held that the PTAB did not err in issuing a final written decision in an inter partes review (IPR) petitioned by SAS Institute. SAS alleged that the PTAB erred in misconstruing a claim term and by not addressing all the claims challenged by SAS in the original petition.

In SAS Institute’s petition to the Supreme Court, it cites 35 U.S.C. §318(a) as the relevant statute regarding the TAB’s responsibility to address every claim challenged by a petitioner under the terms of the AIA. This statute reads:

“If an inter partes review is instituted and not dismissed under this chapter, the Patent Trial and Appeal Board shall issue a final written decision with respect to the patentability of any patent claim challenged by the petitioner and any new claim added under section 316(d).”

As SAS Institute’s petition notes, the track record of the PTAB is clear. The PTAB believes that final written decisions need only to address certain challenged claims, not every challenged claim. The IPR proceeding instituted by PTAB did not include every claim of U.S. Patent No. 7110936, titled System and Method for Generating and Maintaining Software Code, which SAS challenged. In its decision siding with the PTAB, the Federal Circuit noted that SAS’ argument on addressing challenged claims which haven’t been instituted was foreclosed by the court’s February 2016 decision in Synopsys, Inc. v. Mentor Graphics Corp., which also found that the PTAB was not required to issue a final written decision on every challenged claims if those unaddressed claims weren’t part of the trial ultimately instituted by PTAB.

The USPTO Position from Director Lee

The brief for the respondent, USPTO Director Michelle K. Lee, argued that the agency exercised its lawful rulemaking authority granted by passage of the AIA, giving the PTAB the power to institute challenged claims in part so as to “secure the just, speedy, and inexpensive resolution of every proceeding” petitioned at PTAB. This has led to PTAB’s practice of issuing final written decisions on challenged claims for which a trial has actually been instituted and not all challenged claims. In SAS Institute’s case, the PTAB only acknowledged that the petitioner had not established the likelihood that it would prove invalidity of some challenged claims. Lee’s brief also leaned on the Federal Circuit’s ruling in the Synopsys case and noted that the court denied an en banc rehearing of that case, which seems hardly likely to persuade a Supreme Court that has not been bashful about reversing the Federal Circuit even when there have been en banc decisions.

The brief filed on behalf of Director Lee argued that review of the case was unwarranted because the appellate court lacked the jurisdiction to address SAS Institute’s argument that the USPTO was required to institute every claim challenged in an IPR petition. Respondent Lee cites 35 U.S.C. §314(d) to support this argument: “The determination by the Director whether to institute an inter partes review under this section shall be final and nonappealable.” “Petitioner cannot circumvent Section 314(d) by framing its argument as a challenge to the Board’s final written decision, rather than as an attack on the institution decision,” the respondent’s brief reads. The brief also pointed to other statutes governing review proceedings which establish the fact that final written decisions and all other relevant aspects of PTAB review proceedings are claim-specific.

However, petitioner SAS Institute’s reply notes that it had never pursued the claim that the USPTO must institute an IPR for every challenged claim. Instead, it has focused on the argument that Section 318(a) requires a final written decision addressing all challenged claims, not simply claims for which a trial has been instituted. “The Federal Circuit squarely addressed this pure question of law [adverse to SAS], and it is now ripe for this Court’s review,” SAS’ reply reads. SAS further contends that respondent Lee’s argument that the USPTO’s generalized rulemaking authority “somehow justifies its wholesale reconfiguration of Congress’s plan for inter partes review.” As to the claim-specific nature of IPRs and other AIA trial proceedings, SAS argues that this part of Lee’s argument doesn’t obviate the mandate of Section 318(a) to issue a final written decision on all challenged claims.

If the Federal Circuit decision is left to stand, petitioner SAS argues that the USPTO’s ability to ignore challenged claims in final written decisions “destroys the efficiencies that Congress designed into the AIA through the application of estoppel from a final decision.”

“The fact that the Department of Justice as IPR petitioner took a fundamentally different view of the statute than does the Department of Justice as lawyer for the Director of the Patent Office… only punctuates the reasons why this Court’s review is needed. It shows that the issue is indeed important—the extrastatutory regime adopted by regulation even prejudices the government as litigant—and that the Federal Circuit’s decision was not so obviously correct as the Director now claims it to be.” – From reply for petitioner SAS

Another Newman Dissent to Become Law?

I write separately because the PTAB’s practice of deciding the validity of only some of the patent claims challenged in the petition does not conform to the America Invents Act. I stated these concerns in Synopsys, Inc., v. Mentor Graphics Corp., 814 F.3d 1309, 1324, 117 U.S.P.Q.2d 1753, 1765 (Fed. Cir. 2016) (Newman, J., dissenting). The facts and rulings in the present case further illuminate the error in the PTO’s adoption of rules that depart from the legislative plan. The exclusion of some of the challenged claims from the statutory procedures and estoppels of the AIA, accomplished by accepting some of the claims for which review is sought while ignoring others, in the PTO’s absolute discretion, serves no purpose other than to negate the intended legislative purpose of the AIA.

The PTO practice replaces the benefits of the America Invents Act with new disadvantages, for, after the extensive (and expensive) proceedings of inter partes review, the parties are left with unaddressed claims to the same patented invention, claims that can be litigated as if no post-grant proceeding had occurred. This departure from the legislative purpose is illustrated in this case more strongly than in Synopsys, for here the PTAB issued a split final decision, invalidating eight petitioned claims while validating one of the petitioned claims, simultaneously ignoring seven other petitioned claims that were properly presented for review. The split decision, following a partial institution, adds to the uncertainty of the claims that the PTAB chose not to review. The legislative plan contains no hint of such intentional irregularity.

It would be easy for patent owners to be very skeptical given that the Supreme Court has been responsible for some of the most egregious anti-patent decision points over the last 11+ years. The Supreme Court, more than any other branch of government or entity, is uniquely responsible for the erosion of patent rights and the rise of patent jurisdictions outside the U.S. in China and Europe. But it would take a monumental collapse and epic failure of the ages for the Supreme Court to get this decision wrong.

The wolf in sheep’s clothing here is this: SAS Institute and other unsuccessful petitioners want to get those non-instituted claims to the Federal Circuit so they can be appealed. Right now institution decisions cannot be appealed, and while those claims remain in limbo from the patent owners perspective, challengers will want to Federal Circuit to step in and review those claims that receive gold platting by the PTAB based on the belief that the Federal Circuit has become rather hostile to patents.