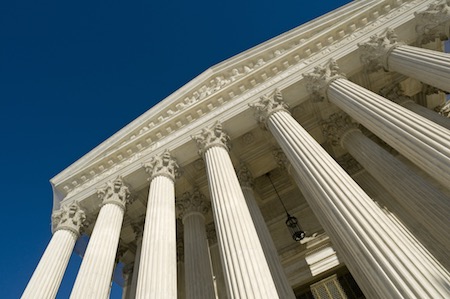 Earlier today the United States Supreme Court issued its much-anticipated decision in TC Heartland LLC v. Kraft Food Group Brands LLC. In a unanimous decision of the Court delivered by Justice Thomas (minus Justice Gorsuch who did not participate in consideration of the case) the Supreme Court reversed the Federal Circuit and ruled that 28 U.S.C. 1400(b) remains the only applicable patent venue statute, that 28 U.S.C. 1391(c) did not modify or amend 1400(b) or the Court’s 1957 ruling in Fourco Glass Co. v. Transmirra Products Corp., and that the term “residence” in 28 U.S.C. 1400(b) means only the state in which a company is incorporated. The importance of this ruling should be immediately felt on patent litigation in the United States. No longer will a patent owner be able to sue an infringing defendant in a district court where the defendant is subject to personal jurisdiction. Instead, patent infringement lawsuits will only be able to be filed in districts within states where the infringing defendant is incorporated, or in districts where there has been an act of infringement and the defendant has a regular and established place of business.

Ultimately, the question those supporting TC Heartland wanted the Supreme Court to address was whether the Eastern District of Texas, which is home to approximately 35% of all patent litigations because it is perceived to be patent owner friendly, is a proper venue for patent owners to be choosing.

Pursuant to § 1400(b), a “patent infringement may be brought in the judicial district where the defendant resides, or where the defendant has committed acts of infringement and has a regular and established place of business.” Pursuant to § 1391(c), a corporation is deemed to be a resident of “any judicial district in which such defendant is subject to the court’s personal jurisdiction…”

In Fourco Glass Co. v. Transmirra Products Corp., 353 U.S. 222 (1957), the Supreme Court held that § 1400(b) is not to be supplemented by § 1391(c) and that “§ 1400(b) is the sole and exclusive provision controlling venue in patent infringement actions…” While that might seem to have ended the inquiry on its face, the Federal Circuit has for 25 the last years ignored the Supreme Court ruling in Fourco Glass based on the belief that 1988 amendments by Congress “rendered the statutory definition of corporate residence found in § 1391 applicable to patent cases.” Thus, it has been the belief of the Federal Circuit that Congress overruled the Supreme Court’s ruling in Fourco Glass, which Congress obviously has the authority to do.

In 1990 the Federal Circuit decided VE Holding Corp. v. Johnson Gas Appliance Co., 917 F. 2d 1574 (1990), which announced its view that the Judicial Improvements and Access to Justice Act of 1988 made 1391(c) applicable to patent infringement actions. At that time Congress amended the general venue statute, §1391(c), to provide that “[f]or purposes of venue under this chapter, a defendant that is a corporation shall be deemed to reside in any judicial district in which it is subject to personal jurisdiction at the time the action is commenced.”

Following VE Holding, no new developments occurred until Congress adopted the current version of §1391 in 2011 (again leaving §1400(b) unaltered). Section 1391(a) now provides that, “[e]xcept as otherwise provided by law,” “this section shall govern the venue of all civil actions brought in district courts of the United States.” And §1391(c)(2), in turn, provides that, “[f]or all venue purposes,” certain entities, “whether or not incorporated, shall be deemed to reside, if a defendant, in any judicial district in which such defend- ant is subject to the court’s personal jurisdiction with respect to the civil action in question.”

In TC Heartland, the Supreme Court determined that Congress did not intend to change the meaning of 1400(b), or to overrule the decision in Fourco Glass because “[W]hen Congress intends to effect a change of that kind, it ordinarily provides a relatively clear indication of its intent in the text of the amended provision.” The Supreme Court also relied on the 2011 changes that added “otherwise provided by law” as some evidence that Congress must have wanted 1400(b) to apply, which would be “otherwise provided by law.”

The Supreme Court simply dismissed as unbelievable the thought that Congress ratified the Federal Circuit’s decision in VE Holding with the 2011 amendments: “In short, nothing in the text suggests congressional approval of VE Holding.” Of course, by the time of the 2011 amendments the Federal Circuit had ruled for nearly a generation that patent infringers were subject to lawsuits wherever they were subject to personal jurisdiction.

Interestingly, while discussing the 1988 amendments Thomas explained that if Congress meant to overrule Fourco Glass and change 1400(b) they would ordinarily provide a clear indication of intent in the text of the amended provision. However, such a clear intended to revert back to Fourco Glass and 1400(b) being the sole venue provision didn’t seem to require a clear indication at all. It must be nice being a Supreme Court Justice. Internally consistent logic is optional I guess.

A Poor Choice by the Supreme Court

In Kraft’s opposition to the TC Heartland petition for certiorari, counsel for Kraft pointed out that this case is a poor vehicle for the Supreme Court to decide the issued complained about by Heartland relating to forum shopping. Kraft unsuccessfully argued:

Even if this Court were inclined to wade into the patent venue dispute, this case would be a poor vehicle. It presents none of the forum-shopping concerns discussed by Petitioner. Respondent developed and practices the patented inventions and sued Petitioner, a nationwide infringer, not in Texas but in the jurisdiction where Respondent is incorporated and suffered injury and where Petitioner purposefully directed sales of its infringing product. App. 2a. It is telling that Petitioner could muster no more than a cursory argument in favor of a § 1404(a) discretionary venue transfer.

Kraft is, of course, correct. Obviously, this case has nothing to do with forum shopping whatsoever. TC Heartland shipped allegedly infringing products into Delaware and was sued in Delaware. How that can or should be surprising is a real mystery.

What is really going on is this case was used by those with an agenda to attempt to make a statement about what is happening in the Eastern District of Texas, in a patent owner friendly district court. That the Supreme Court would take this case and force Kraft to play an unwilling and unjustifiable role in a macabre judicial protest with heavy political overtones is unconscionable.