A Few Thoughts on the Supreme Court’s Section 101 Jurisprudence

The following post is based on a keynote speech Senator Coons delivered at a conference entitled, “The Supreme Court’s Section 101 Jurisprudence: Dangers for the Innovation Economy,” on December 7, 2016. It has been edited by Senator Coons’ staff for clarity. 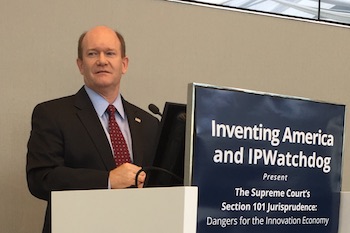 Developments in the law of intellectual property are beginning to create real roadblocks for future innovation, an issue that patent professionals see more clearly than many in the House and Senate. This is particularly true in the case of patent-eligible subject matter.

Until recently, Section 101 of the Patent Act of 1952 acted as a coarse filter, with the remaining patentability requirements of Title 35 doing the heavy lifting on whether a patent should issue. This arrangement let examination focus on whether the inventor had disclosed enough information and whether he or she had made a sufficient advancement in science or technology. Over the last eight years, however, a series of Supreme Court decisions on Section 101 have substantially moved the line on what is patent-eligible. These rulings have created uncertainty about the validity of previously issued patents, many of which companies have already relied upon to justify significant research and development investments.

Our current problem appears twofold. First, courts are calling into question whether patents should be granted at all to inventions made in critical areas of our innovation economy, namely medical diagnostics and computer software. Second, the manner in which case law has been developing is creating profound uncertainty on what is and what is not patentable. Whether or not one gets a patent or that patent survives in court should not depend on which patent examiner your case is assigned to, or what judge you appear in front of. Such ambiguity has serious implications in the investment sector, where confidence is essential. If we are regularly seeing such levels of inconsistency, then we have an area where the jurisprudence is insufficiently clear, and which may necessitate congressional action to provide clarity and consistency.

Why should Americans care about patent-eligible subject matter? For one, eroding patent protection has worrisome implications for long-term investment in research and development, negatively influencing American predominance in emerging technologies. If, for instance, a business has less confidence in patent protection and its ability to gain a return on investment, that company is going to make lower investments in research and development over the long term. The average consumer will not see the impact of lower investment immediately, but an emerging decline will be apparent to patent practitioners—such as the experts gathered in this room—well before it begins to impact American consumers more broadly.

Lower investment in research and development has real consequences. Take, for example, Alzheimer’s. The human and budgetary costs to our country of failing to address Alzheimer’s are staggering, with projected federal government expenses up to one trillion by 2050. Without sufficient investment in diagnostics, we will not be able to adequately address this looming public health crisis and so many others.

Another likely consequence of restricting patent eligibility is that innovators in those fields will instead shift to trade secret protection, which they may see as the only realistic option to protect their investment. Inventors should certainly have the option to choose trade secret protection. That’s why I joined with Senator Orrin Hatch (R-UT) to introduce the Defend Trade Secrets Act, which President Obama signed into law last year. This new law creates a federal private right of action to defend trade secrets for the first time, making it the last aspect of intellectual property rights to be so protected.

The Defends Trade Secrets Act represents a significant, positive step forward. So why is a switch from relying on patents to trade secrets an issue? Put bluntly, relying on trade secrets when it is not appropriate to do so inhibits cooperative research by putting advancements into silos, shielding it in a way that does not expand the collective storehouse of human knowledge. That is the benefit behind the incentives created by patents: an individual obtains a limited monopoly in exchange for sharing their invention with others, thereby advancing the world’s scientific knowledge. By moving away from patents and towards trade secrets, research being conducted in emerging areas of innovation will stagnate under a shroud of silence. If we reduce meaningful patent protection, then we are essentially incentivizing the wrong choice for the long-term benefit of society.

Equally worrisome is the sheer amount of ambiguity that the developing Section 101 jurisprudence is creating. A great deal of ink has been spilled in trying to discern a clear path through recent Supreme Court decisions. Trial judges must decide this issue early in a case without a fully developed record and under conflicting precedent. Patent examiners must interpret these rulings and try to apply this complex body of law to each application consistently within a limited amount of time. Finally, a decision falls upon inventors and investors. They too must confront this legal quagmire when deciding whether they should seek a patent or trade secret protection, while businesses face compounding uncertainty in their investments.

I am particularly concerned about the impact this case law has on the patent application process. Instead of focusing on novelty and clarity, examiners and applicants alike spend time struggling to make sense of Section 101 jurisprudence. That is a serious misallocation of the limited resources of both patent examiners and applicants, leading to longer examination times and less reliable patent grants. Delays in patent review and patent grants can interrupt a startup’s lifecycle, negatively influencing employment growth, sales, and subsequent innovation. This is just one of several factors lengthening patent examination, but it is one that may warrant a congressional response.

In short, these factors harm prospects for U.S. economic growth. More worrisome, we are conceding areas of technological and medical innovation to our competitors. Europe and China do not follow this Supreme Court jurisprudence. Instead, they are roaring ahead and providing patent protection and clarity in areas where we are not. We already have a IP licensing trade surplus of about $85 billion, but we are running the risk of undermining this competitive advantage.

There are reasons to be concerned, but it remains important that the dialogue not stop here. This is where you come in, because the patent practitioner and advocacy community understands this issue far better than most members of Congress. The challenge before you, as practitioners in the field, is that you often notice the prevalence of these issues before the legislative community. In that sense, you function much like the proverbial canary in the coalmine.

For the benefit of our innovation economy, when you all agree there is a problem, and you see a clear solution that requires congressional action, that should serve as a call to action. While there have been substantial divisions between the IP creator and user communities on patent litigation reform, I understand that there have been remarkably constructive and very broad conversations convened by a number of organizations on the issue of patent eligibility. This conversation is one that I find particularly encouraging, and it is my hope that we will have a bipartisan commitment on the part of Congress in this sphere as well.

I remain dedicated to tackling this issue. If you conclude that there is a legislative path forward—one that is sensible, that provides for predictability, and that will restore our competitive edge—I welcome that input. I care about highlighting this issue, identifying credible, bipartisan solutions and getting those passed, because while so many other issues occupy us right now in Congress, we should not let this one continue to get away from us.

Let me just offer some final overarching principles about how we might ideally legislate on this issue. First, it should be technology-neutral. Congress should not be favoring one industry over the other—picking winners and losers—through legislation. Second, we should not make it more difficult for new technologies to receive patent protection. By definition, we have difficulty conceiving of what the most revolutionary technologies of the coming years or decades will be, and our laws should be flexible enough to reflect that reality. We must recognize that innovation occurs in areas that a decade ago would have been difficult to even conceive of today. Finally, the process of determining what is patent-eligible needs to be clearer and simpler. Resolving the drag on the system that I have elaborated upon in these remarks should be our chief concern.

To conclude, let me simply thank you for this assemblage of brainpower, skill, and years of experience. Additionally, let me commend IPWatchdog and the Innovation Alliance for bringing attention to this very important policy issue, and allow me to offer my engagement, support, and services as a junior Senator from the First State, Delaware. With one of the highest percentages of patent holders and Ph.D.s per capita in the country, Delaware residents value getting this right, and so do I. Thank you.