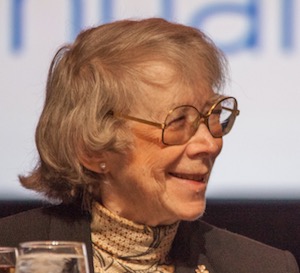 Judge Pauline Newman of the United States Court of Appeals for the Federal Circuit, delivered this nonprecedential opinion for the Court.

Earlier today the United States Court of Appeals for the Federal Circuit issued a nonprecedential opinion finding claims to a graphical user interface (GUI) patent to be patent eligible. See Trading Technologies International, Inc. v. CQG, Inc. The decision of the panel, authored by Judge Newman and joined by Judge O’Malley and Judge Wallach, is noteworthy for several reasons. First, the Court did not believe that their ruling affirming the district court to merit a precedential designation. This would suggest that the panel did not believe the decision would add to the body of precedential law, which would appear to make this an easy case for the panel. Second, the claims that have been found to be patent eligible under 35 U.S.C. 101 in this “easy decision” are currently under review by the Patent Trial and Appeal Board (PTAB) in a Covered Business Method (CBM) review because the PTAB believed the graphical user interface patent claims are likely patent ineligible. See PTAB Gone Rogue.

This dispute began when the patent owner, Trading Technologies International, charged CQG with infringement of U.S. Patents No. 6,772,132 (“the ’132 patent”) and No. 6,766,304 (“the ’304 patent”), both of which share a common specification. CGQ moved for judgment, asserting that the claims of these patents are directed to patent ineligible subject matter. The district court denied CGQ’s motion, holding that the claims are not directed to an abstract idea and also that they recite an inventive concept, such that the subject matter is patent eligible under § 101.

The ’132 and ’304 patents describe and claim a method and system for the electronic trading of stocks, bonds, futures, options and similar products. The patents explain problems that arise when a trader attempts to enter an order at a particular price, but misses the price because the market moved before the order was entered and executed. This is the problem these patents are directed toward solving.

1. A method for displaying market information relating to and facilitating trading of a commodity being traded in an electronic exchange having an inside market with a highest bid price and a lowest ask price on a graphical user interface, the method comprising;

displaying an order entry region comprising a plurality of locations for receiving commands to send trade orders, each location corresponding to a price level along the common static price axis; and

in response to a selection of a particular location of the order entry region by a single action of a user input device, setting a plurality of parameters for a trade order relating to the commodity and sending the trade order to the electronic exchange.

In applying the first step of the Alice two-step framework (sometimes referred to as Step 2A), the district court determined that the patents solve problems with prior GUI devices in the computerized trading area, specifically improving speed, accuracy and usability. The district court explained in its decision that the patents did not merely claim displaying information on a graphical user interface, but rather required a specific structured interface in order to address and resolve a specifically identified problem. Thus, the district court found that the claims were patent eligible without need to go on to the next Alice inquiry. The Federal Circuit completely agreed with the district court’s analysis, but added further that the graphical user interface does not represent a long known idea, which is a threshold criterion of abstract idea ineligibility.

The plot now thickens. The ‘304 patent is currently embroiled in what can only be described as a questionable CBM review by the PTAB. In November 2016, in Unwired Planet v. Google, the Federal Circuit slammed the PTAB for using an inappropriate definition of what constitutes a CBM patent, saying that the definition of a CBM patent used by the PTAB would practically make every patent a CBM patent. Institution of a graphical user interface as a CBM patent was always dubious given the technical aspects of the invention, but in light of the ruling in Unwired Planet the CBM proceeding against the ‘304 patent became even more questionable. Still, a final decision is awaited, with the written decision due soon.

Will the PTAB actually rule that claims to the ‘304 patent are patent ineligible when those claims have already been found to be patent eligible by the Federal Circuit? We shall see, but at this point I wouldn’t put anything past the PTAB. After all, this is the same entity that declared an MRI machine to be abstract.