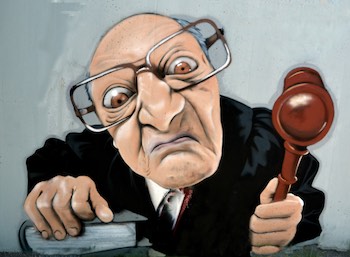 In CBM2015-00161, the Patent Trial and Appeal Board (PTAB) at the United States Patent & Trademark Office (USPTO) recently instituted a Covered Business Method (CBM) review on a non-business method patent with a clear and unambiguous technological aspect. This institution decision is in direct contravention of the statute, which is by its express terms prevents CBM review from anything with a technical aspect. In short, only covered business methods, which are financial related business method patents without a technological aspect, are supposed to be subject to this special form of post grant review. Even more troubling, the patent in question has been found to be directed to technological improvements by both the European Patent Office and the United States Federal District Court for the Northern District of Illinois. Nevertheless, the PTAB still instituted a CBM.

U.S. Patent No. 6,766,304 is the patent in question. The ‘304 patent claims the structure, makeup, and features of an improved graphical user interface (“GUI”) tool that can be used for electronic trading. The claims of the patent are in no way directed to a business method or to a method for data processing. The institution decision is troubling because the patent is clearly not a CBM.

The decision implicates an important technological field of innovation – GUIs. A GUI “is an interface through which a user interacts with electronic devices such as computers, hand-held devices and other appliances.” For all practical purposes, GUIs transform computing devices into different tools. For example, depending upon what GUI is being run, an iPhone can be a phone, a calculator, a compass, a flashlight, a game, a carpenter’s level or virtually any other tool.

According to Section 18 of the America Invents Act (AIA), the USPTO may institute a transitional proceeding only for a patent that is a covered business method patent. A covered business method patent is defined as a patent that claims a method for performing data processing or other operations used in the practice, administration, or management of a financial product or service. Specifically excluded from the definition of a covered business method patents are those that relate to technological inventions. See 37 C.F.R. 42.301(a). To determine whether a patent is for a technological invention the PTAB is supposed to consider whether the claimed subject matter recites a technological feature that is novel and unobvious over the prior art; and solves a technical problem using a technical solution. See 37 C.F.R. 42.301(b).

While it is true that not all graphical user interfaces are considered to embrace a technological invention, the evidence that the ‘304 patent is directed to a technological improvement is overwhelming.

Classification in 705 is Irrelevant

First, ordinarily graphical user interfaces are placed by the USPTO in Class 345, which covers computer graphics processing and selective visual display systems. For reasons that seem completely arbitrary, if the GUI relates in any way to financial services it is not placed in Class 345, but rather is placed in Class 705. This arbitrary reclassification may seem harmless, but classification in 705 is really a USPTO kiss of death for a variety of reasons. Not only is Class 705 known to have a low allowance rate, but the PTAB relied to at least some extent on classification in 705 as justification for finding the invention claimed in the ‘304 patent to be a covered business method. Clearly, there is no rhyme or reason to the USPTO classification system that warrants any deference, particularly when patent applications that should otherwise be classified in Class 345 are arbitrarily assigned to Class 705 when they relate to financial services.

“Using class 705 as a justification for a finding of a finance service or product under Section 18 is inappropriate,” explains Robert Sachs, author of the widely read Bilski Blog and a partner at Fenwick & West. “Class 705 is much broader than that, and includes many subclasses that may be business related, without being specifically financial products or services.   For example, there are subclasses that deal with scales and meters used in generating fees or prices, such as parking meters, postage meters, taxi meters.  Congress did not likely intend taxi meters and butcher’s scales to be subject to CBM review.”

The lack of deference that should be paid to classification into Class 705 is further bolstered by how the USPTO moves cases from other Art Units into and out of Class 705 to more evenly distribute examination duties. The USPTO has always redistributed cases to different Art Units for a variety of reasons, some having nothing to do with the underlying characteristics of the claimed inventions. For example, Sachs recently did an analysis of over 29,000 applications having Office Actions in December and found that 65 applications that had been primarily classified into Class 705 at the time of publication were moved out of Class 705 by the time of the First Office Action. Similarly, some 45 applications that had been previously classified outside of Class 705 were moved into Class 705.

Legislative History Shows GUIs were not for CBM

Second, the legislative history confirms that the entire point of the law was to provide an extraordinary post-grant review proceeding for business method patents because Congress believed that the USPTO was ill equipped to examine this type of patent application in the late 1990s and early 2000s. Every example of a CBM provided in the legislative history claims at some level a business method or data processing technique. Moreover, the legislative history specifically states that patents claiming GUIs for trading, as opposed to patents claiming a trading strategy, are not CBMs. In particular, the bill’s sponsor Senator Schumer agreed with Senator Durbin that a patent claiming “software tools and graphical user interfaces that have been widely commercialized and used within the electronic trading industry to implement trading and asset allocation strategies” was not a CBM.

Judge Coleman says ‘304 Patent is Technical and Not Abstract

Third, on February 24, 2015, in concurrent federal district court litigation, Judge Sharon Johnson Coleman concluded that the ‘304 patent is “directed to a technological improvement of GUIs,” and “is not directed to an abstract idea…” Judge Coleman further specifically concluded: “the claims recite an inventive concept.” See Trading Technologies International, Inc., v. CQG, Inc. (Case No. 05-cv-4811) Memorandum Opinion Order. The institution decision ignores the substance of the opinion and makes no attempt to explain what is wrong or at all unpersuasive about Judge Coleman’s reasoning.

Europe Thinks there is a Technical Effect

Anyone with GUI related patents, whether in the financial, medical, gaming, or consumer electronics sectors, should be concerned and follow how this matter unfolds. If this case can continues, patent owners really must ask themselves how safe their patent portfolio is from the death grip of CBM at the hands of the PTAB? If a patent that has been adjudged to be related to a technological invention both in federal district court and in Europe can be reeled into a CBM proceeding meant only for pure business methods of a financial nature it seems that no patent is truly safe.