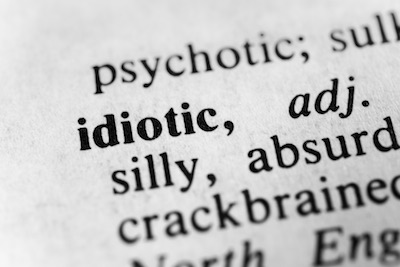 In what can be described only as an utterly ridiculous, intellectually insulting, and idiotic decision, the Patent Trial and Appeal Board (PTAB) of the United States Patent and Trademark Office (USPTO) has done the truly absurd. In Ex parte Hiroyuki Itagaki the PTAB has ruled a magnetic resonance imaging (MRI) machine to be patent ineligible because it is an abstract idea, citing the United States Supreme Court’s decision in Alice v. CLS Bank for support.

The application in question is U.S. Patent Application No. 20100119136, titled Magnetic resonance imaging apparatus and image classification method, which relates back to a Patent Cooperation Treaty filing date from April 2008. The applicant appealed two different obviousness rejections. The PTAB overruled the patent examiner, finding the claims were not obvious, but instituted a new ground of rejection. That new ground of rejection for this MRI machine related to lack of patent eligibility under 35 U.S.C. 101 because the machine is nothing more than an abstract idea.

The illustrative claim discussed by the PTAB in the decision was claim 1, which unambiguously relates to a machine. Claim 1 covers:

a display unit configured to display the plurality of images in a predetermined display format; and

a classification processing unit configured to classify the plurality of images by image types and station position, based on imaging condition including imaging parameters,

For reasons not explained by the PTAB panel, the Alice/Mayo framework was used to determine whether this machine claim is patent eligible.

The Alice/Mayo framework is the decisional approach adopted by the Supreme Court for determining whether a patent claim embody patent eligible subject matter. To this point the framework has only been used with respect to software patents and life science related innovations, but I have not seen the framework applied to machines. Indeed, the Alice/Mayo framework has been limited in applicability to when there is a possibility that one of the three so-called judicial exceptions to patent eligibility may be in play. Those three judicial exceptions relate to abstract ideas, laws of nature and nature phenomena.

The Alice/Mayo framework requires the decision maker, whether a patent examiner, administrative tribunal or reviewing court to ask and answer a series of questions before determining whether the patent claim in question constitutes patent eligible subject matter. The first question (commonly referred to as Step 1) is whether the patent claim covers an invention from one of the four enumerated categories of invention defined in 35 U.S.C. §101 (i.e., is the invention a process, machine, article of manufacture, or composition of matter). If the answer to this question is no then the patent claim is patent ineligible. If the answer is yes the decision maker must move on to the next inquiry because the statutory test established by Congress is no longer the complete test for patent eligibility in the United States.

The PTAB’s Analysis of the Alice/Mayo Framework

In this case the PTAB panel did not examine the statutory language to determine whether the claims were drawn to a process, machine, article of manufacture, or composition of matter. Had they done so they might have noticed that the invention being claimed is a machine (i.e., apparatus, which in patent terms is indistinguishable from a machine).

The PTAB panel starts their Alice/Mayo analysis with Step 2A, and somehow determined that “the claimed subject matter is direct to classification.” How or why the panel chose to ignore the explicit language of the claim is not explained. Neither is it explained how they could possibly determine that a claim explicitly drawn to a machine was not directed to a machine. In any event, the PTAB panel concluded “the classification concept is an abstract idea.”

Of course, completely missing the point that what is claimed is a machine.

Eventually, the PTAB panel does get around to acknowledging: “Claim 1 describes a multi-station MRI, comprising an image acquisition unit, a display control unit, a classification processing unit.” The decision, however, seems to search for its own vindication of ruling a machine patent ineligible by pointing out that there is no requirement that the MRI be computer-implemented.

I am at a loss with respect to what to say.

I suppose the first thing is to state the obvious — the Administrative Patent Judges that participated in this panel should immediately be subject to some kind of internal discipline. These APJs should be suspended or removed from the PTAB altogether, and if that isn’t possible within the bureaucracy of the federal government they should simply be sidelined indefinitely. At least that way they cannot do any more damage.

My second thought is that a decision finding a machine claim abstract has to be a bridge too far for even the most vocal proponent of the Alice/Mayo monstrosity. But even as I type that I know that some will celebrate a finding that the patent eligibility of machines can now be called into question because it fits their anti-patent ideology. I do suspect, however, that more thoughtful believers in the Alice/Mayo framework will cringe and realize this decision goes too far and will bring the industry together to fight in a way that they have been unwilling to do up to this point. But if a machine can be declared patent ineligible because it is an abstract idea there is no point in keeping your powder dry, the fight must be now and it must be won.

My final thought is with respect to those who said Alice v. CLS Bank wasn’t a bad decision. Many people openly mocked me, for example, as I wrote that the decision would be used and intentionally misinterpreted by those who ideologically oppose patents. In the 30 months since the decision my predictions have sadly come all too true. It didn’t take a rocket scientist to know how those with an anti-patent ideology would apply Alice, and apply it with an anti-patent vigor they have!

Since the Supreme Court issued the ill conceived Alice decision I have been practically begging patent attorneys to give up on method claims. In article after article and speech after speech I have suggested going all in on machine or apparatus claims, putting that specific language in the preamble and building the body of the claim accordingly, just as was done in the representative claim at issue here. Let’s have the discussion about whether a machine can be an abstract idea, I would say. Once we have a decision that declares a machine to be an abstract idea we will have jumped the shark and perhaps then the entire industry will see what a mess the Supreme Court has made of patent jurisprudence. Perhaps then there will be a chance to come together to find a consensus solution.

We have reached that moment, the shark has been jumped, and the emperors without any clothes have decided that a machine is an abstract idea. If this decision stands we might as well shutter the Patent Office because little of consequence in the age of artificial intelligence and virtual reality will be patent eligible if a machine is an abstract idea.