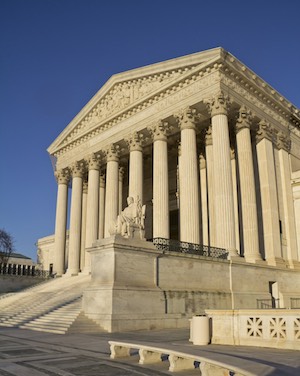 Recently there were a number of amicus briefs filed in support of the Respondent, USPTO Director Michelle Lee. One of the briefs caught my attention, primarily because it makes one statement that seems clearly false on its face, and other statements that seem quite misleading. The brief I have issues with was filed on behalf of Unified Patents.

It is so axiomatic that district courts use a different standard than does the USPTO when interpreting claims it is almost difficult to figure out where to begin to unravel this falsehood.

Perhaps the best evidence of the acknowledgement of a different standard between the way the Patent Office and district courts interprets claims is guidance issued from the Office itself. In the Manual of Patent Examining Procedures (MPEP 2111) the Office explains to examiners that they are to use a different standard, saying:

Patented claims are not given the broadest reasonable interpretation during court proceedings involving infringement and validity, and can be interpreted based on a fully developed prosecution record. In contrast, an examiner must construe claim terms in the broadest reasonable manner during prosecution as is reasonably allowed in an effort to establish a clear record of what applicant intends to claim. Thus, the Office does not interpret claims in the same manner as the courts.

While not binding on the courts, this statement of Office policy suggests that even the Patent Office would disagree with this proposition offered up by Unified Patents.

This broadest reasonable interpretation of the claims is made as the claims would be understood by one of ordinary skill in the art. This was explained in Phillips v. AWH Corp., 415 F.3d 1303, 1316 (Fed. Cir. 2005) as follows:

The Patent and Trademark Office (“PTO”) determines the scope of claims in patent applications not solely on the basis of the claim language, but upon giving claims their broadest reasonable construction “in light of the specification as it would be interpreted by one of ordinary skill in the art.”? In re Am. Acad. of Sci. Tech. Ctr., 367 F.3d 1359, 1364 (Fed.Cir.2004). ?Indeed, the rules of the PTO require that application claims must “conform to the invention as set forth in the remainder of the specification and the terms and phrases used in the claims must find clear support or antecedent basis in the description so that the meaning of the terms in the claims may be ascertainable by reference to the description.” 37 C.F.R. §?1.75(d)(1). ? It is therefore entirely appropriate for a court, when conducting claim construction, to rely heavily on the written description for guidance as to the meaning of the claims.

This is the only passage in Phillips that uses the term “broadest reasonable construction.” Clearly, the Federal Circuit is discussing how the Patent Office interprets claims and concludes that if the Patent Office is going to rely on the specification when construing claims it seems appropriate for a reviewing court to similarly rely on the specification as well. It does not say that the court should employ the broadest reasonable construction.

In fact, district courts do not employ the broadest reasonable interpretation of claims, which the Federal Circuit’s recent precedential decision in PPC Broadband, Inc. v. Corning Optical Communications (Feb. 22, 2016) explained. The decision dealt with a review of several decisions from the Patent Trial and Appeal Board (PTAB) from related inter partes review (IPR) proceedings. Writing for the unanimous panel Judge Moore explained: “claim construction in IPRs is not governed by Phillips. Under Cuozzo, claims are given their broadest reasonable interpretation consistent with the specification, not necessarily the correct construction under the framework laid out in Phillips.” Judge Moore would go on to write that the construction of the critical claim term by the PTAB was “not the correct construction under Phillips, it is the broadest reasonable interpretation…”

Indeed, it is telling that Judge Moore (joined by Judges O’Malley and Wallach) would characterize the Phillips standard as “the correct construction” while directly contrasting it with the broadest reasonable interpretation, which is the way the Patent Office interprets claims.

It is also critically important to recognize that Phillips specifically acknowledged and accepted the principle that a court construing patent claims should construe the claims, if possible, to preserve validity of the claims. While the maxim that a reviewing court should, where possible, construe a claim to preserve validity is only applicable in limited scenarios, the maxim remains good law. There are dozens of cases that have applied this maxim over the last generation, and the Phillips court continued to recognize its existence.

As the Federal Circuit has previously explained, “[i]t would be inconsistent with the role assigned to the PTO in issuing a patent to require it to interpret claims in the same manner as judges who, post-issuance, operate under the assumption the patent is valid.” In re Morris, 127 F.3d 1048, 1054 (Fed. Cir. 1997). So the question the Supreme Court must answer is whether an Administrative Judge who refuses to allow amendments to the application must presume the patent is valid and apply the Phillips standard instead of the BRI standard that is used during prosecution of an application.

Differences between the courts and the PTO in claim interpretation may be attributable to factors other than the claim construction standard. One of these factors is the statutory presumption of validity, which is a court’s expression of “the deference that is due to a qualified government agency presumed to have properly done its job which includes [personnel] who are assumed to have some expertise in interpreting the references and to be familiar from their work with the level of skill in the art and whose duty it is to issue only valid patents ” American Hoist and Derrick at 1359. In short, a court will defer to agency expertise—the technical expertise used by the PTO in review proceedings, initial examination, and claim construction and the nature of PTO examiners, staff, and PTAB judges District court judges must deal with a broad universe of cases, and are not required to have the engineering or scientific background required of PTO examiners or PTAB judges, whose focus is much narrower In contrast, the PTAB determines technical truth guided by its own technical and scientific training, with the input of the parties Absent deference to the expertise of the agency, there is no presumption of validity.

There are numerous problems with this paragraph.

The two sentences of the original § 282, which, though added to, have not been changed, amount in substance to different statements of the same thing: the burden is on the attacker. And, as this court has been saying in other cases, that burden never shifts. The only question to be decided is whether the attacker is successful. When no prior art other than that which was considered by the PTO examiner is relied on by the attacker, he has the added burden of overcoming the deference that is due to a qualified government agency presumed to have properly done its job, which includes one or more examiners who are assumed to have some expertise in interpreting the references and to be familiar from their work with the level of skill in the art and whose duty it is to issue only valid patents.

There is no statement here that says that the presumption of validity exists only because of deference to the expertise of the agency. What Judge Rich is saying is that patents are presumed valid, the burden never shifts to the patentee to prove anything because patents are presumed valid, and if all the challenger is going to do is cite the same prior art already considered by the patent examiner they are going to have an even more difficult time of overcoming the presumption of validity. American Hoist and Derrick clearly does not stand for the proposition for which it was asserted in the Unified Patent brief.

Second, in American Hoist and Derrick, Judge Rich explains that the statutory presumption of validity codified into the 1952 Patent Act stemmed not from any deference to the Patent Office, but rather from “the basic proposition that a government agency such as the then Patent Office was presumed to do it job.”

This is an important point. There is a subtle distinction between giving the Patent Office deference and assuming that they have done their job properly the first time. Unified Patents argues that the Patent Office is not required to give issued patents a presumption of validity because they issued the patents in the first place and the presumption only exists because courts must give patent examiners deference – a deference that the PTAB must seemingly not provide to examiners. But the presumption is not based on deference to the agency or letting the agency do whatever the agency wants with a property right. Instead, as Judge Rich explained, the presumption was based on the sensible belief that patent examiners did their job properly. If it is reasonable for district courts to believe that patent examiners did their job properly it can and should be equally believable to the PTAB.

Finally, the inconvenient truth presented by the presumption of validity is that it is very simple, straightforward and easy to understand. 35 U.S.C. 282(a) in its entirety says: