Evolution of Technology: Bluetooth, the once and future king

A major sociopolitical figure from 10th century Scandinavia reverberates today in the name of a communications company that has developed a single communications standard for connecting our complex world of mobile computing devices. On May 12th, the National Inventors Hall of Fame will induct Jaap C. Haartsen as the inventor of Bluetooth wireless technology. Although not the only innovator to have a hand in the development of the wireless communications standard, Haartsen was responsible for some important Bluetooth advances and is the sole inventor listed on the patent protecting basic Bluetooth communications.

Between 958 and 970 AD, the kingdom of Denmark was ruled by Harald Blåtand, also known as Harald Bluetooth. Some of the major events of Harald’s reign include his conversion to Christianity in 960 and expansion of the Danish kingdom into lands which are part of present-day Norway. Converting the Danes to a single religion and engineering a series of public works for the Danish people helped Bluetooth unify many Danish tribes into a single country which still exists with us today. If our readers have ever wondered what the sharp, angular Bluetooth symbol stood for, they might be interested to know that it is a combination of the Danish runes for H and B.

Fast-forwarding about one millennium to the mid-1990s brings us to the earliest days of the modern Bluetooth that we know today. In 1993, Jaap Haartsen was working as a wireless communications engineer for Swedish digital communications firm Ericsson when he was tasked to develop a short-range radio connection that would enable new functionalities for mobile phones. In 1995, Haartsen was joined by Sven Mattisson, another engineer of wireless communication technologies, and the pair were able to develop multi-communicator, or MC, links.

Linking two Bluetooth-enabled devices creates an ad-hoc, short-range wireless network known as a “piconet.” These piconets, which operate in an unlicensed industrial, scientific and medical (ISM) band ranging from 2.4 gigahertz (GHz) to 2.485 GHz, are dynamically created whenever Bluetooth devices are within ten meters of each other. Eight devices can connect to the same piconet at once and multiple piconets can operate on the same device at the same time. When connected to the piconet, one device that has been designated as a master can transmit data to one or more slave devices. Each piconet can handle digital communications involving voice, data, printing, faxes and more, and the ability to operate multiple piconets at the same time enables Bluetooth to provide an incredible amount of short-range telecommunications functionality.

Haartsen’s work would focus on piconet networks over the coming years and he would leave Ericsson to play a role in the founding of the Bluetooth Special Interest Group (SIG) in 1998. Between 1998 and 2000, Haartsen served as the chairman of the SIG air protocol certifications group, helping to standardize the Bluetooth radio communications protocol.

The standardized nature of Bluetooth which allows all of these dynamic wireless networks among a diversity of electronic devices is why the 10th century Danish king came to serve as the namesake for a Swedish technology. The Bluetooth development team was searching for a new name to replace MC Link and the current moniker we all know was proposed in the late 1990s by Intel’s head of technological development, Jim Kardach. Kardach was in Toronto, Canada, presenting wireless technologies to SIG companies along with Mattisson and the two traded stories during a wintry pub crawl, during which Mattisson brought up the figure of Harald Bluetooth. Soon thereafter, Kardach received a history book entitled The Vikings and a representation of Bluetooth was one of the first things that Kardach came across. When he and others made the connection that, much like Harald Bluetooth, the wireless technology sought to unify a lot of separate entities into a single system, the name seemed like the best fit at the time. 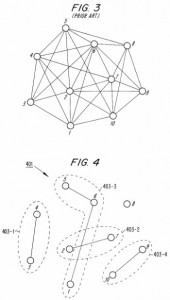 There are about 10 patents protecting Bluetooth technology according to the Centre for Business History in Stockholm, most of which are held by Ericsson. The patent which brings Haartsen his hall of fame acclaim is U.S. Patent No. 6590928, titled Frequency Hopping Piconets in an Uncoordinated Wireless Multi-User System. The patent discloses a wireless network with a master unit and a slave unit, the master unit being capable of communicating with the slave unit by means of a virtual frequency hopping channel. The invention solved a need for a cost-effective wireless local network supporting both voice and data transmissions by enabling self-organization techniques to make efficient use of limited available radio spectrum. The patent application was filed in September 1997 and was issued by the U.S. Patent and Trademark Office in July 2003; it lists Haartsen as inventor and Ericsson as assignee.

Bluetooth SIG formed in 1998 as a coalition of five promoter companies: Ericsson, Intel, Nokia, Toshiba and IBM. By the end of that year, there were already 400 members. The first Bluetooth-enabled mobile phone, the Ericsson T36, was brought to market in 2000. The following year saw the first Bluetooth-enabled printers, laptops and hands-free car kits. Bluetooth hit the wearable gadgetry wave early with Bluetooth chips implanted within watches and sunglasses in 2006. By 2012, annual shipments of Bluetooth-enabled products reached 2 billion worldwide. At the end of 2014, membership in Bluetooth SIGS had reached 24,000 members and hit 90 percent penetration into the mobile phone market.

Anyone who has followed our coverage of technological trends here on IPWatchdog will probably realize that the ubiquity of the Bluetooth data transmission system puts it squarely into the rapidly expanding Internet of Things sector. As we’ve reported in the past, there are predictions that by 2050 there will be a total of 50 billion devices with wireless data transmission technologies, and such wide-ranging candidates such as tennis rackets and toothbrushes have been suggested. The past two Consumer Electronic Shows in Las Vegas have been dominated by discussions of the Internet of Things. In recent years, Bluetooth has developed the Bluetooth Smart system which improves battery power efficiency, enabling longer usage in devices with small batteries. Everyday objects like shoes, speakers or toothbrushes can be implanted with a Bluetooth Smart chip to connect directly with apps on a smartphone or tablet, making it a pretty valuable communications protocol for IoT technologies.

Bluetooth chips are already installed within a diverse array of things which are available in the consumer tech market. Short-range connectivity has already been used to introduce a collection of wireless computer peripherals like mice or keyboards. The recently released OM/ONE speaker, an omnidirectional speaker/microphone that levitates atop a magnetic base, shows how innovators are continuing to improve upon Bluetooth-enabled products that have already been available for years. A team of engineers at the Massachusetts Institute of Technology have developed a Bluetooth-enabled fingernail trackpad called NailO which allows a user to interact with a mobile phone or computer unobtrusively.