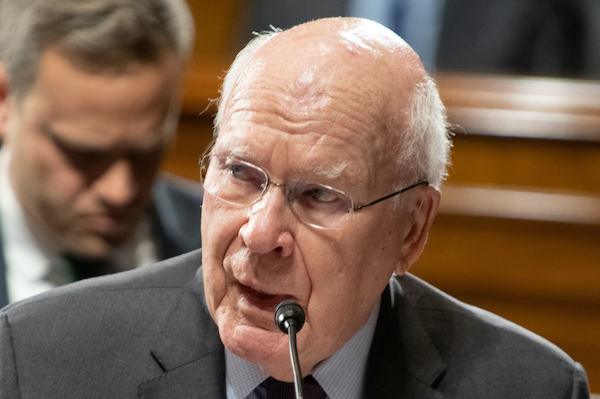 IPWatchdog has obtained a draft summary of the “Restoring the America Invents Act” bill that Senate IP Subcommittee Chair, Senator Patrick Leahy (D-VT), is purportedly expected to introduce shortly. Several other outlets have reported that either Leahy himself or sources on the Hill confirmed such a bill is in the works and will address discretionary denial practice at the Patent Trial and Appeal Board (PTAB) under the PTAB’s precedential Apple Inc. v. Fintiv, Inc. decision, which sets out a list of factors that the Board will evaluate in deciding whether to discretionarily deny instituting a petition due to parallel district court litigation. The draft explains that the bill would require the USPTO to institute a proceeding if it meets the statutory standards, “with discretion to deny institution based on statutory considerations, so only one action goes forward at once.”

The imminent bill will also address the Supreme Court’s Arthrex v. Smith & Nephew decision, which the summary claims has diminished public trust in PTAB decisions by allowing USPTO Directors to “non-transparently meddle in PTAB decisions.” The bill would thus require any decision by the Director to be issued in a separate written opinion. “The public will therefore be aware which decisions are being made by PTAB judges and which are being made by a politically appointed and accountable Director,” explains the draft.

Next, the bill would clarify the bases for inter partes review (IPR) by ensuring that the PTAB can institute review in a number of scenarios, including: 1) when the patentee is trying to extend patent term under a double patenting doctrine; 2) when a patent admits that someone else originally came up with the invention; 3) clarifying that government entities may file IPRs; and 4) that a party who voluntarily dismisses a suit in district court will not be barred from filing an IPR based on that suit.

The bill also promises to clarify the bases for estoppel and the timelines for rehearing decisions by either the PTAB or Director, as well as the petitioner’s right to appeal even when not currently infringing a patent; instructs that amended claims must be proven patentable and the claims must be substantively examined; prevents the Office from issuing new patent claims that are not patentably distinct from canceled claims; and requires the USPTO to issue a scheduling plan in the case of multiple proceedings on the same patent to avoid conflict.

According to the draft summary’s introduction, “over five years, the changes made in the America Invents Act resulted in an increase of $2.95 billion in gross domestic product, with more than $1 billion more in added personal income for Americans.” The bill is intended to “restore post-issuance proceedings to make them fair and accessible.”

Scott McKeown of Ropes & Gray, who told Managing IP Magazine that he provided language for the bill, predicted that the end of Fintiv practices, while eliciting some pushback from bio/pharma, smaller plaintiffs and licensing entities, would survive the bill’s passage—which is not likely to be a possibility before spring of 2022. He also makes predictions on the other proposals on the Patents Post Grant blog.

No doubt this will solidify Leahy’s position as an anti-patent figure for some, and confirm fears many in the patent bar had when he was appointed Chair of the Senate IP Subcommittee earlier this year.