On Tiffany Cunningham’s Appointment to the CAFC: An Impeccable Candidate and a Rallying Call for More Diversity in IP

“Unlike the majority of the current Federal Circuit bench, Cunningham has almost 20 years of IP litigation experience representing industry giants including Intel, Microsoft, Amazon and Panasonic in federal courts…. [This should] inject a practical perspective and enhance the Court’s understanding of the client interests at stake in these cases.” 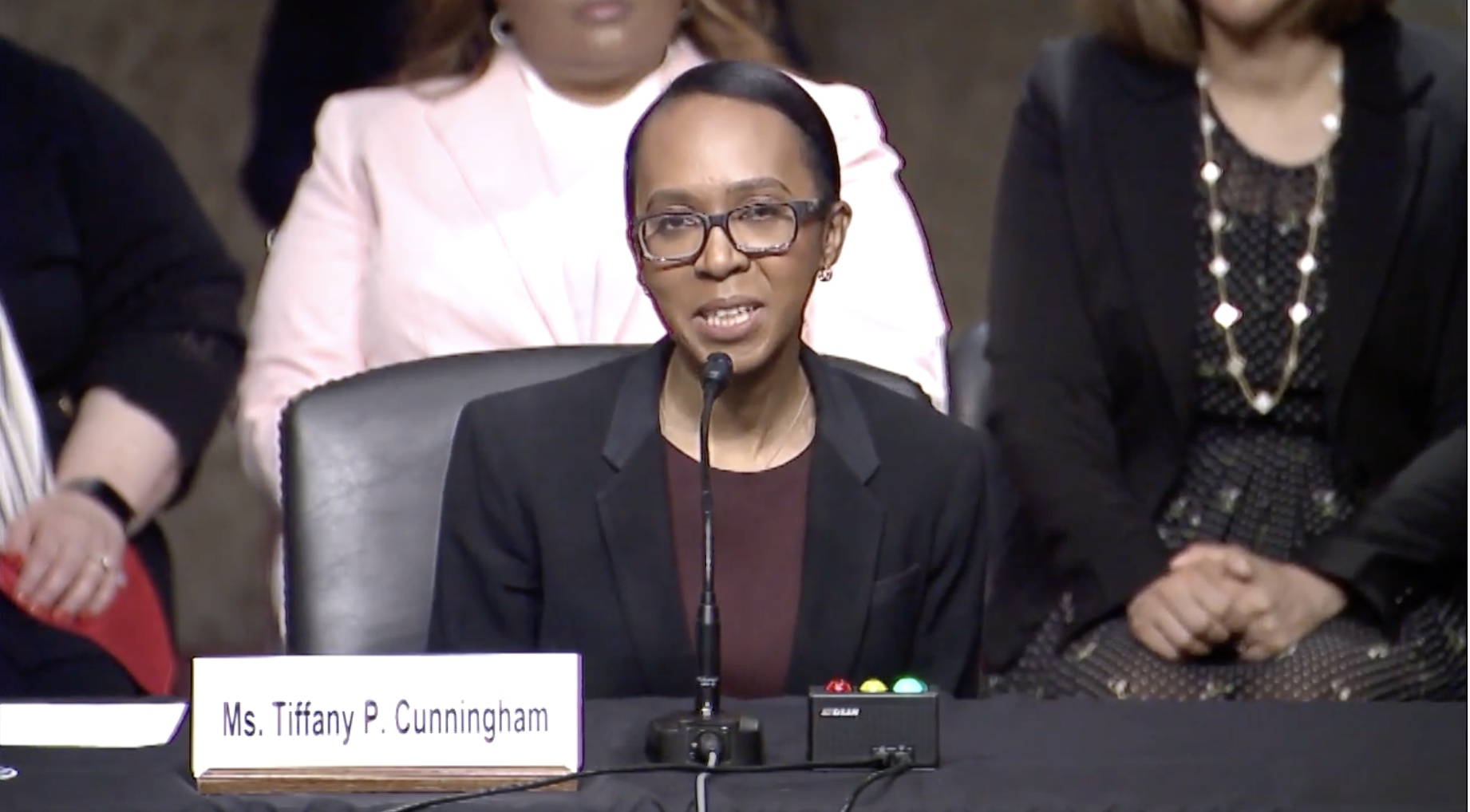 Senator Cory Booker described Cunningham as a “history maker” and an “extraordinary human being by any measure.” And she is. Cunningham, a registered patent attorney and intellectual property litigator, has been a partner at Perkins Coie since 2014 and currently serves on the firmwide Executive Committee. Prior to that, Cunningham served as a partner and associate at Kirkland & Ellis LLP and also clerked for Federal Circuit Judge Timothy Dyk. Cunningham has had a storied career serving as trial and appellate counsel in complex patent and trade secret disputes involving myriad technologies, including pharmaceuticals, computer science, and automotive and mechanical engineering. With a law degree from Harvard and a degree in chemical engineering from the Massachusetts Institute of Technology, Cunningham’s legal and technical credentials are impeccable.

Although undeniably a highly successful litigator, Cunningham told the Senate Judiciary Committee that joining the Federal Circuit has long been her “dream job.” In the same breath, Cunningham noted that, while clerking for Judge Dyk, she was confronted with the Federal Circuit’s lack of diversity with “all white judges and only two women.” But Cunningham was not discouraged and instead placed obtaining the role on her “mental vision board” in hopes “that one day [she] could be a judge of that Court.”

It would take 20 years for Cunningham to realize her dream—the Federal Circuit being the last U.S. federal court of appeals to gain its first African American judge. Senator Booker lamented this belated progress during Cunningham’s confirmation hearing when he expressed a “sense of exhaustion and exultation” that we are still counting “the first black person” to reach a particular milestone after 250 years of American history. Like the Federal Circuit bench, the intellectual property (IP) bar that appears before it has been sorely lacking in diversity—only 1.8% of all IP attorneys are African American according to 2017 data from the American Intellectual Property Law Association (AIPLA). As for African American women practicing IP law, alarmingly, this author could find no reported data whatsoever. Thus, although Cunningham’s nomination is a welcome and deserving “first,” it spotlights a 40-year dearth of diversity on the Court and a chronic shortage of African American women lawyers in the IP bar.

Gender Parity for the CAFC

Cunningham’s confirmation is also notable in that it adds another woman to the federal bench. Fortunately, the Federal Circuit has made great strides in gender diversity since Cunningham’s days as a law clerk—nearly half of the Federal Circuit’s judges are women, including current Chief Judge Kimberly Moore. The Court will achieve complete gender parity with the addition of Tiffany Cunningham. Beyond the bench, there has also been significant progress in improving gender diversity in IP law positions at the United States Patent and Trademark Office—recent reports estimate that 38% of PTAB judges are women. The IP bar, however, cannot boast similar statistics. According to the AIPLA, women comprise about 30% of IP attorneys (including patent, trademark and copyright) at law firms (J. Shontavia Johnson, Tonya M. Evans, and Yolanda M. King, “Diversifying Intellectual Property Law: Why Women of Color Remain ‘Invisible’ and How to Provide More Seats at the Table, 10 Landslide 4, 31 (2018)). However, the American Bar Association reports that only 21.8% of registered patent attorneys are women (Elaine Spector and LaTia Brand, 13 Landslide 1, (2020)). The numbers are worse when we consider the percentage of women in law firm leadership. Only 19% of equity partners across all areas of law are women. And, over the last decade, women argued only 12.6% of all patent appeals before the Federal Circuit and less than 10% of patent appeals on behalf of private entities. Even worse, the proportion of women arguing such appeals is trending downward: from 2014-2016, women presented nearly 20% of all oral arguments before the Federal Circuit, but by 2017-2019 less than 14% were argued by women.

President Biden appears to have recognized this diversity crisis in the law, and in his first four months has nominated as many minority women to the federal bench as President Trump over his entire presidential term. Fifteen of his 19 nominees so far are women, including 11 women from diverse racial and ethnic backgrounds. And of Biden’s seven nominees for the U.S. Courts of Appeals, six are women, four are ethnic minorities, and three are African American. Biden has also pledged to nominate the first African American woman to the Supreme Court. But executive action to increase diversity in the judiciary will not remedy the absence of diverse candidates in the judicial pipeline.

Although most major law firms and clients have invested in diversity programs, the statistics suggest that such efforts have not paid off in producing more diverse law firm leadership, particularly in IP law. We must do more. Tiffany Cunningham’s elevation to the Federal Circuit can and should inspire law firms (and their clients) to make sure that diverse lawyers obtain more experience in senior litigation roles, including making arguments before district and appellate courts. We also owe a responsibility to better educate diverse students about the opportunities that STEM degrees can provide, including opportunities in patent law. And the courts can support these efforts. For example, the Federal Circuit recently reversed its order to decide an appeal on the briefs to provide a junior diverse attorney an opportunity at oral argument. Google and its attorneys had requested that the Court reconsider its order because the most knowledgeable attorney was a Perkins Coie associate who “ha[d] not previously argued a Federal Circuit appeal” and Google and its outside law firms . . . are collaborating to increase participation by . . . junior and diverse lawyers in their appellate matters.” Further instances of this type of public-private teamwork are needed to provide meaningful opportunities for diverse IP lawyers.

In addition to bringing some much-needed diversity to the bench, Cunningham’s legal background will enrich courts in other important respects. Unlike the majority of the current Federal Circuit bench, Cunningham has almost 20 years of IP litigation experience representing industry giants including Intel, Microsoft, Amazon and Panasonic in federal courts. She also has experience with Hatch-Waxman litigation, having successfully represented ViiV Healthcare in a case brought against generics, Lupin and Teva. Since the lion’s share of Federal Circuit appeals are patent disputes, Cunningham’s real-world experience in that arena should inject a practical perspective and enhance the Court’s understanding of the client interests at stake in these cases. With a degree in chemical engineering from MIT, Cunningham also adds another technical background to a court that is heavy on electrical engineers. The addition of a chemical engineer with practical experience litigating pharmaceutical cases should also assist with resolution of the large number of Hatch-Waxman appeals that come before the court.

As for Cunningham’s likely impact on Federal Circuit jurisprudence, her confirmation hearing unsurprisingly provided few hints. When questioned on her views on a handful of hot topic patent issues, Cunningham carefully repeated that she would apply the law faithfully to the facts of each case before her. She did, however, hint at her “general” view on certain issues.

Senator Grassley asked Cunningham if she thought it is appropriate for District Judges to actively create favorable patent venues in their districts. The Senator’s comment was likely aimed at judges in patent litigation hotspots in the Western and Eastern Districts of Texas who attract vast numbers of patent cases and recently generated headlines for delaying and denying motions to transfer. Cunningham responded that district court judges “should be focused on applying the law to the facts of each case without [] taking into consideration [] what sorts of cases they might want to appear before them.” This comment suggests that Cunningham may agree with the Federal Circuit’s recent rebukes of Judge Alan Albright’s refusal to transfer a number of patent cases out of the Western District of Texas.

Also interesting was Cunningham’s response to Senator Coombs’ question about whether the Federal Circuit should clarify the standard for patent eligibility under 35 U.S.C. §101. Cunningham offered that the “area deserves attention,” and noted that the Supreme Court is currently considering taking this issue up (in American Axle v. Neapco), hinting that she, along with much of the current Federal Circuit bench and the broader patent community, would like clarification on Section 101 from the nation’s highest court. Notably, Cunningham has real-world experience with Section 101 issues—in 2015 she defended drug screening method patents against a summary judgment motion of invalidity under Section 101.

Don’t Let Her Be the Last

How Cunningham will actually rule on these and other substantive patent law issues remains to be seen. What is certain is that Cunningham’s nomination provides national stage visibility of an exceptionally well-qualified and diverse lawyer filling a high-profile judicial post. Although a cause for celebration, this momentous occasion should not be wasted in self-congratulation but rather should provide momentum for further public and private efforts to increase diversity at the most senior echelons of the IP bar. Without a ready supply of diverse and qualified candidates, we remain in danger of this important “first” becoming a “last.”

Emer Simic Emer Simic is a partner in the Intellectual Property practice group at Neal Gerber Eisenberg. A registered patent attorney, she is an accomplished litigator with substantial experience successfully representing both [...see more]