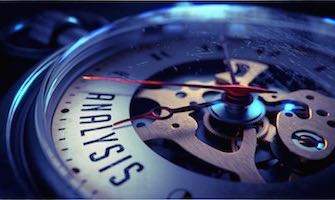 We discovered, when determining the propriety of a FAFR, the USPTO has been comparing whether claims are drawn to same invention using two separate legal standards: identical scope or patentably indistinct. The majority of the patent corps apply the 1969 legal standard which limits FAFR to claims of identical scope as previously examined. The results of our analysis indicated the new patentably indistinct standard authorizing FAFR on substantially amended claims originated in one Technology Center (TC), was upheld by the FA Decision (defined below), and then adopted by another TC in 2018. Codifying two alternative FAFR standards in the June 2020 MPEP permits all patent examiners to arbitrarily impose FAFRs on substantively amended claims, if they so wish.

As discussed in Part 1, the USPTO expanded their authorization to make FAFRs on amended claims filed in continuing applications, based on the 2017 final agency petition decision (FA Decision) in patent application 13/353,841. The FA decision relies on the Molins PLC v. Quigg, (D.D.C. 1987) and (Fed. Cir. 1988) decisions, dismissed for mootness and lack of ripeness, and the In re Bogese decision, 22 USPQ2d 1821, 1824-26 (Comm’r Pat 1992), involving five serial continuations filed without response or amendment. The FA Decision alludes to, but does not identity, other “past first final actions decisions” relied upon when imposing the FAFR policy change.

Historically, it has been difficult for patent practitioners to obtain access to relevant USPTO petition decisions. While USPTO final agency petition decisions are made public, they are only available in their extremely hard-to-find FOIA Reading Room and in Public PAIR, if you know the patent application number. Moreover, the rare decisions pertaining to premature final rejections have been indistinguishably deposited under the catch-all “Other” group which contains several hundred miscellaneous decisions in non-searchable and uncategorized PDF documents. Locating decisions pertaining to premature final rejections amongst these hundreds of decisions is like finding a needle-in-a-haystack. For all intents and purposes, the USPTO’s final agency petition decisions have heretofore been practically unavailable to the public.

A search query of the database using the keywords “first action final” or “706.07(b)” quickly identified many decisions pertaining to premature final Office actions. The queried petitions were reviewed for the specific fact pattern: FAFR of amended claims filed with requests for continued examination (RCEs) or continuation applications (CONs).

We identified 23 additional decisions mailed between 2015-2019 and signed by 16 different TC personnel. Including the FA Decision, 22 petitions were directed to FAFRs following an RCE while two petitions pertained to FAFRs in CONs.

The resulting decisions were carefully reviewed to determine the meaning intended for the phrase same invention, thereby discerning which legal standard – identical scope or patentably indistinct – was applied to assess the propriety of the FAFR. The resulting decisions were sorted by TC, decision date, decision type and legal standard applied include a mix of grants, dismissals and denials which originated from seven TCs. The FA Decision, coded as Decision L, is the only final agency decision identified. Any other “first final action decisions” alluded to in the FA Decision escaped our discovery. 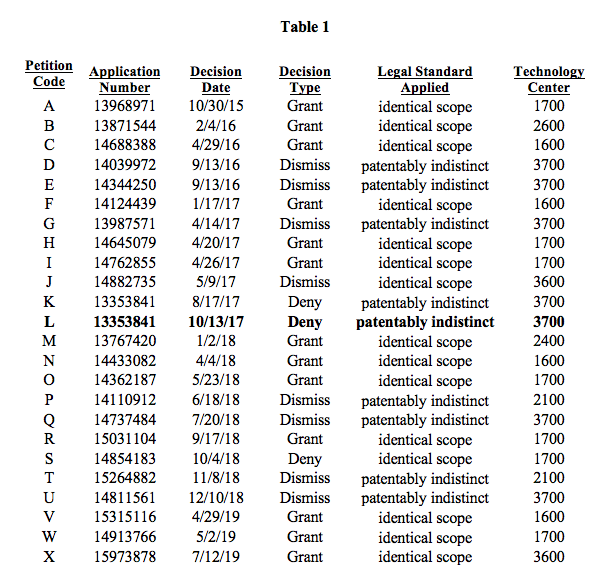 Current petition grant rates help practitioners make informed decisions when considering whether to file a petition. The USPTO posted a 41-44% 12-month rolling average grant rate for petitions related to all types of premature final rejections.  The 24 petitions in this survey are granted at a higher rate (54%), however grant rates vary dramatically depending on the legal standard applied – 87% using identical scope and 0% for patentably indistinct.

We identified a clear demarcation between the legal standards applied by TCs, resulting in vastly divergent FAFR practices depending on Applicant’s technology- and industry-sectors. Petitions filed in TC3700 (Mechanical Engineering, Manufacturing, Gaming and Medical Devices/Processes) and TC2100 (Computer Architecture and Software) were exclusively decided based upon the patentably indistinct standard and experienced a 0% grant rate. Petitions filed in all the other technology sectors were decided using the identical scope standard and enjoyed an 87% grant rate. Applicants for these other technology sectors were permitted to receive non-final Office actions on amended claims filed with a RCE or CON. No petition data was found for TC2800 (Semiconductors/Memory, Circuits/Measuring and Testing, Optics/Photocopying, Printing/Measuring and Testing), suggesting that TC2800 examiners made no improper FAFRs or that their practitioners filed no petitions to request withdraw of an improper FAFR.

Chart 1 clearly depicts that the different FAFR outcomes before and after the sole FA Decision are based on the Applicant’s technology- and industry-sector. 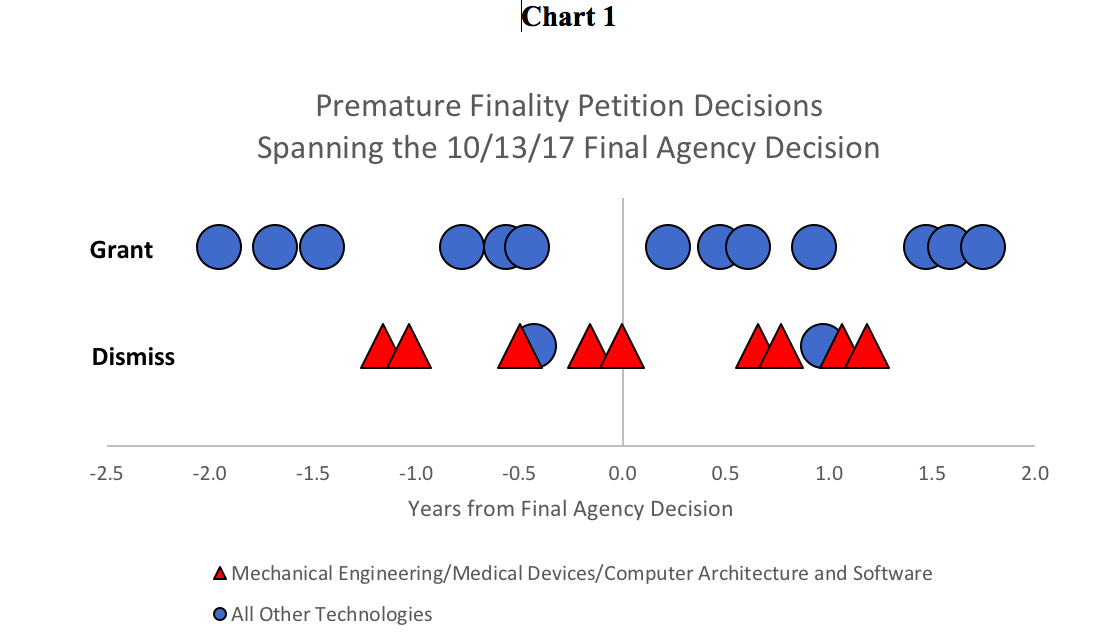 Taking into account examining corps staffing as of February 2020 and TC subject matter, Chart 2 shows that most examiners work in TCs where the identical scope standard is applied. 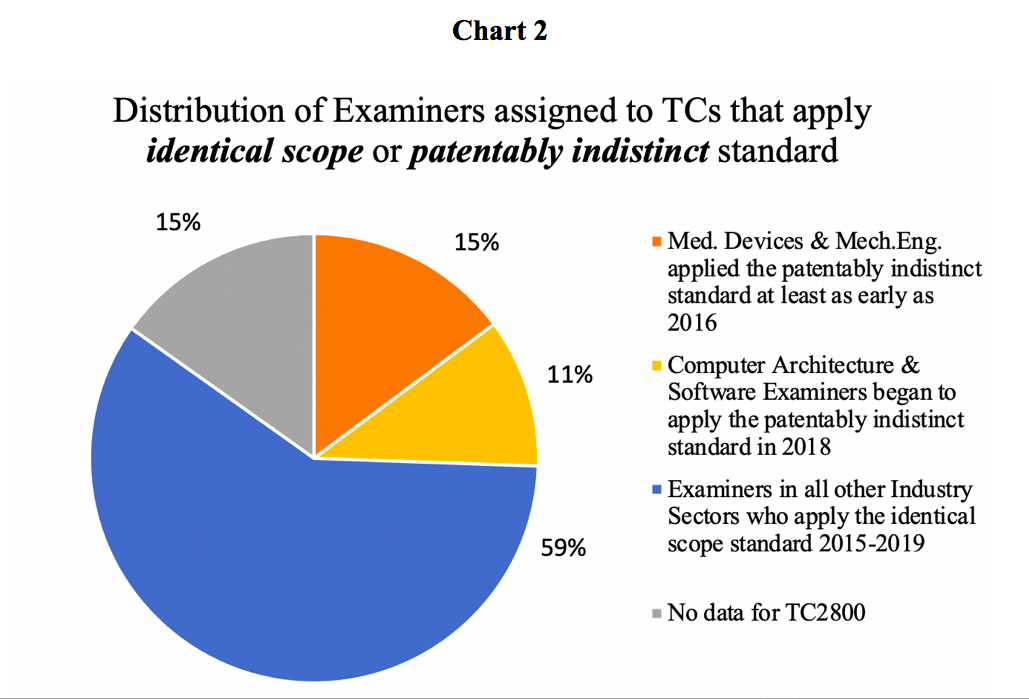 One explanation for Chart 1’s finding is USPTO personnel, like the public, were not informed of the FA Decision or were not given advance notice of the June 2020 changes to Section 706.07(b). Conversely, USPTO personnel who authored the FA Decision and then modified Section 706.07(b) may be operating in a vacuum, unaware that the most TC personnel routinely apply the identical scope standard to grant FAFR petitions. Selection bias may play a role since Applicants only file renewed petitions when their initial petition is dismissed/denied.

In addition to Decision L’s precedent upholding two serial FAFRs, emboldened by Decision D, a dismissal, that examiner made a second FAFR on amended claims submitted with the 2018 RCE.

In May 2019, a TC1700 Group Director applied the identical scope legal standard to overturn an improper FAFR in Decision W. Following the June 2020 policy change, that examiner made a second FAFR on amended claims filed with the August 2020 RCE.

As forewarned in a recent LAW360 article, early signs suggest that the USPTO’s new FAFR policy has the potential to constructively abolish non-final Office actions during continued examination. The authors will monitor upcoming petition decisions to determine how the June 2020 policy change alters FAFR practice.

As previously urged, final rejections and the attendant after final practice are anachronisms that need to be abolished in favor of a modernized compact prosecution regime where every amendment is entered as a matter of right with applicant’s response to every third office action to be accompanied by a RCE request and fee. (See In Order To Form A More Perfect Patent Examination System—It Is Time To Update Compact Prosecution to Compact Prosecution 2.0, posted September 24, 2013 on the IPO Law Journal-Patent Section web page). The adoption of such a policy will save examiners and applicants resources (time, effort, and money) that are now used in a futile manner. The best example of this futility is the USPTO’s new FAFR policy, based on one obscure FA decision, and retroactively implemented without wide notice and with no opportunity for stakeholders to prepare or comment. That the USPTO used its resources to implement this new policy instead of modernizing compact prosecution is not understood. Applicants should be able to expect better treatment from an agency funded by their user fees.

William Smith is Of Counsel with Adam R. Richardson, LTD. Prior to transitioning to private practice, Bill was an Administrative Patent Judge for over 19 years in the USPTO.