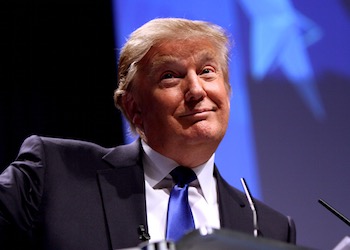 Donald Trump has garnered a great deal of attention in recent weeks over thoughts which he has turned into words that have, somewhat inexplicably, been released from his mouth at various levels of volume during his run for President of the United States. A string of alleged scandals and polarizing comments at recent debates has created a tight presidential race in which popular opinion of the Republican candidate has decidedly trended towards disfavor, even as it seems to bolster his own base.

Trump, no stranger to lawsuits himself, can now count U.S. district courts as the latest venue where his position could be on the decline. A suit filed in the U.S. District Court for the Northern District of Illinois (N.D. Ill.) lists Trump, his son Donald Trump Jr., Mike Pence and a series of 10 Does as defendants in a copyright infringement action. At the center of the lawsuit is a picture of a bowl of Skittles, which was used for a now-infamous metaphor for the Syrian refugee crisis.

The copyright infringement action was brought by David Kittos, a British photographer, who claims that the Skittles tweet published by Donald Trump Jr. used a copyright protected image created by Kittos. The photograph, titled by Kittos as “White Bowl of Candy,” was taken by Kittos around January 15th, 2010, and is available through the photographer’s Flickr page. The complaint notes that all rights to the image were reserved by the photographer when the picture was uploaded to Flickr.

According to the complaint, there can be little doubt that the Skittles photo used by the Trump campaign is the same photograph taken by Kittos. The complaint notes how the artistic elements of the “White Bowl of Candy” photo are identical to the photo used by the Trump campaign, right down to the random placement of the colored candies inside of the bowl. “It would be beyond difficult to accurately recreate such a vivid image, given the challenge of replicating the exact lighting and exposure of the image, as well as assembling the arrangement of the candies,” the complaint reads.

The plaintiff’s allegation of copyright infringement focuses on actions taken by the Trump campaign on September 19th of this year, when Kittos’s “White Bowl of Candy” appeared in a tweet sent by Donald Trump Jr. as an advertisement for the campaign on a Twitter account. A follow-up tweet was also published by Trump Jr. including the image. Both times, Trump Jr. alluded to the Skittles as a metaphor for Syrian refugees, derogating an entire population living in a nation riddled by war by equating them with a widely commercialized and available candy. As noted, the unauthorized use of the photo was designed to influence public opinion of the Trump campaign, which has taken a very hard stance at times against immigration.

Normally, a copyright-protected image could be licensed by the photographer to an outside party interested in running the image with some form of advertisement, and the photographer would typically recoup a royalty. In this case, however, it was highly unlikely that Kittos would have furnished such a license for use of the image, given the subtext of the argument and Kittos’ own background. The complaint notes that the plaintiff was “reprehensibly offended” by the use of the photo in large part because Kittos was forced to flee his home in the Republic of Cyprus at the age of six, making him a refugee himself.

Part of the plaintiff’s charges rest on the defendants’ history in being targeted for the unauthorized use of copyright-protected content. This March, Trump’s presidential campaign was named as a defendant in a suit filed by wildlife photographers over the campaign’s use of a copyright-protected image of a bald eagle. The plaintiff’s charged that the bald eagle image was applied to promotional merchandise sold by the Trump campaign while the campaign was not authorized to use the image. The suit was dismissed without prejudice in early June after the Trump campaign settled out of court.

Not only did the Trump campaign use an unauthorized image in violation of copyright, the plaintiff also alleges that the method which the image was used was selected in order to incite “an epidemic of third-party infringement of the photograph.” The use of Twitter as the platform for publication reflected the intention of the Trump campaign that the photo would be widely shared through re-tweets which would reproduce the image and accompanying text on Twitter and other social media platforms like Facebook and Pinterest, and indeed the plaintiff alleges that “thousands of individuals” re-published the advertisement without authorization from the copyright holder. “The effect of this iterated unauthorized reproduction and redistribution is the rampant viral infringement of Plaintiff’s exclusive rights in his Photograph,” the complaint reads.

Without taking any legal action to have the unauthorized content removed from Facebook, which occurred after plaintiff’s counsel contacted Twitter to demand the removal of the content, the plaintiff believes that the posts would have remained online and available for more unauthorized redistribution. The Trump campaign has also admitted that the copyright-protected image has been valuable to the Republican nominee’s efforts. The plaintiff’s complaint notes coverage by CNN which reported an official statement from the Trump campaign defending Trump Jr.’s use of the image and calling the nominees’ son, “a tremendous asset to the campaign.” While the Trump campaign conceded that the Skittles tweet could be viewed as politically incorrect, which was a major charge at the time, that political incorrectness was, as it has been time and again by Trump’s group of insiders, hailed as proof of the kind of change that Americans want. In early November, we’ll find out how much truth there is in that line of thinking.