“Today, the digital transformation where software is ‘eating the world’ is undeniable. Here are the latest facts and figures from the USA, Europe and China.” 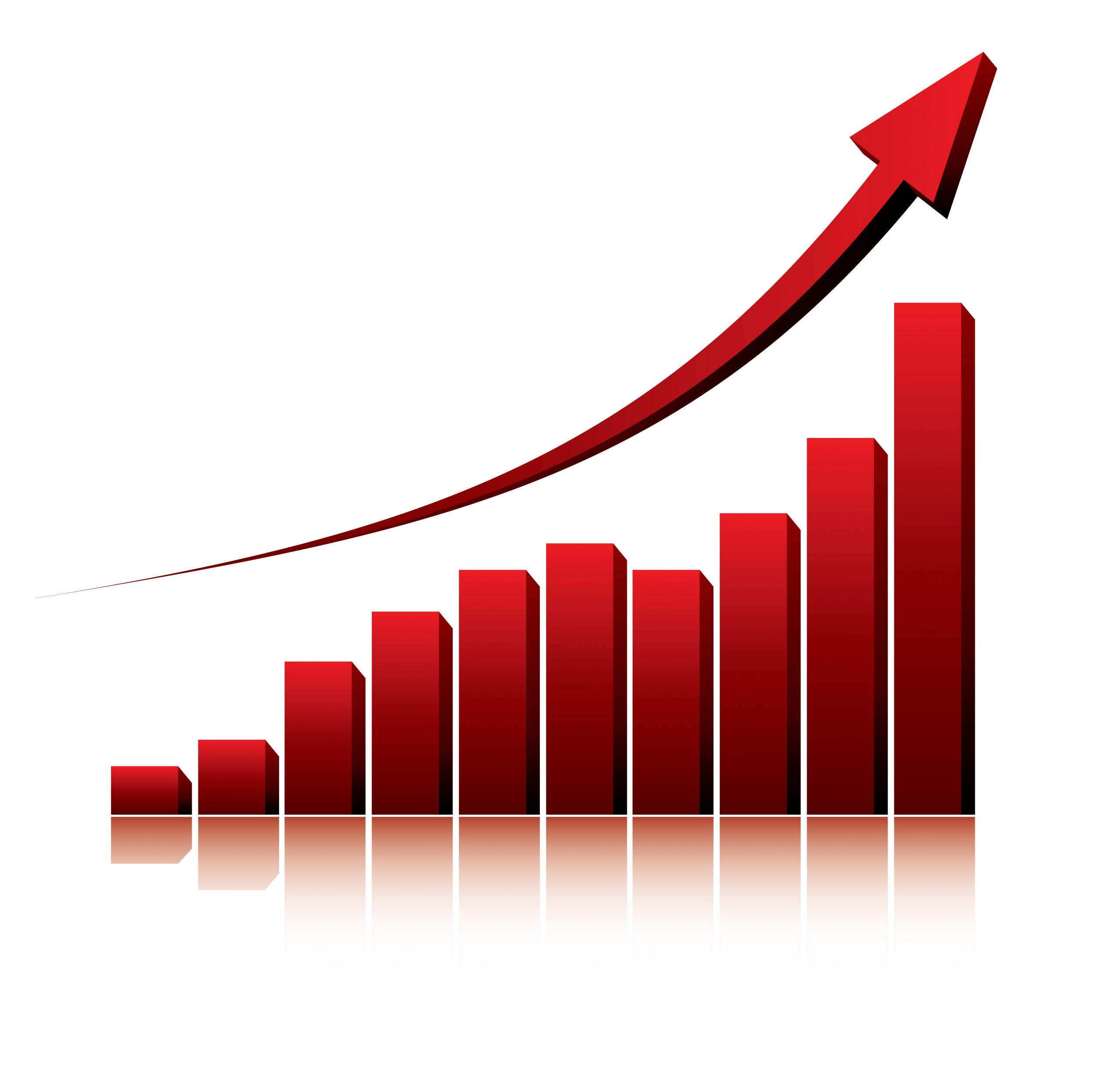 As an update to my posts from 2017, 2019, 2020, and March 2021, it has now been 86 months since the U.S. Supreme Court’s 2014 Alice Corp. v. CLS Bank decision. Yet the debate still rages over when a software (or computer-implemented) claim is patentable versus being simply an abstract idea “free to all men and reserved exclusively to none” (as eloquently phrased over 73 years ago by then-Supreme Court Justice Douglas in Funk Bros. Seed Co. v. Kalo Inoculant Co.).

Further, it has been 10 years since famed venture capitalist Marc Andreessen wrote the influential and often-quoted op-ed piece in the Wall Street Journal titled “Why Software Is Eating the World.” Today, the digital transformation where software is “eating the world” is undeniable. Let’s look at some facts and figures from the USA, Europe and China.

It’s All in the Numbers

In 2020, the global M&A activity in the software and Internet services space reached USD 158 billion, representing over 2,790 deals [IMAA]. The United States is the largest technology market in the world, representing 33% of the total estimated IT spend for 2021 (or approximately USD 1.6 trillion), followed by Europe at 19% and China at 14% [CompTIA].

The European software market (including business productivity and security software) is expected to amount to approximately USD 127.4 billion in 2021 [Statista]. The EU software industry delivers EUR 910 billion (USD 1.07 trillion) in total value-added GDP (over 7% of the EU28 total GDP) [BSA]. As of 2018, the European software industry has been growing five times faster than the rest of the EU economy [Dataconomy].

So, given the above, we sought to determine what percentage of U.S. Patent and Trademark Office (USPTO), European Patent Office (EPO)-, and Chinese Patent Office (CNIPA)-issued patents are “software-related”?

To define what patents are “software-related,” we utilized the same methodology employed by the United States Government Accountability Office in a 2013 report to Congress. That report relied on certain United States Patent Classification (USPC) classes and subclasses of applications most likely to include software-related claims as selected by expert advisors to the USPTO. Now, with the assistance of IP services firm Clairvolex (and after converting from the USPC system to the Cooperative Patent Classification (CPC) system), data was pulled from the PatSeer Global Patent Database. The results? 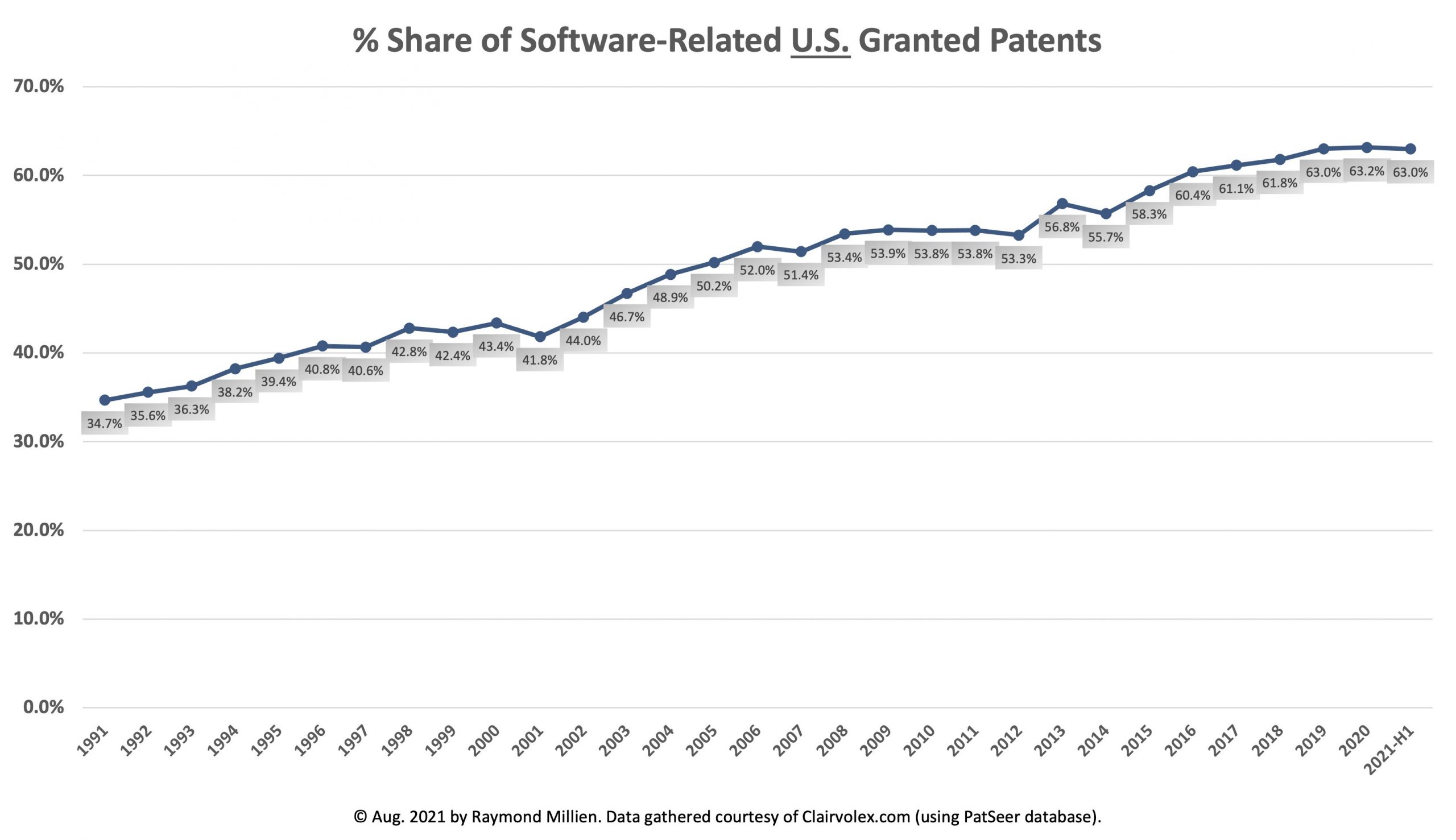 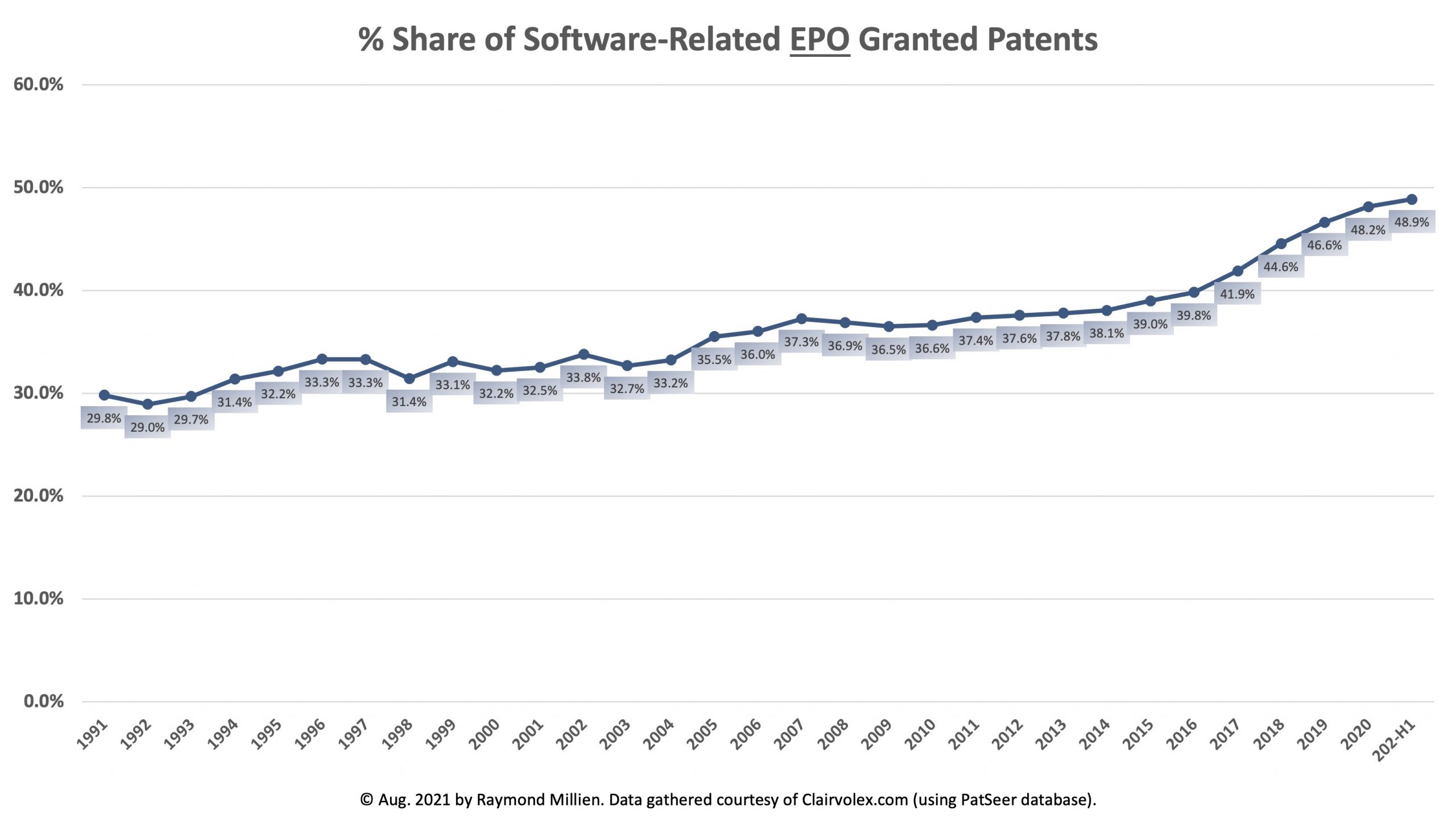 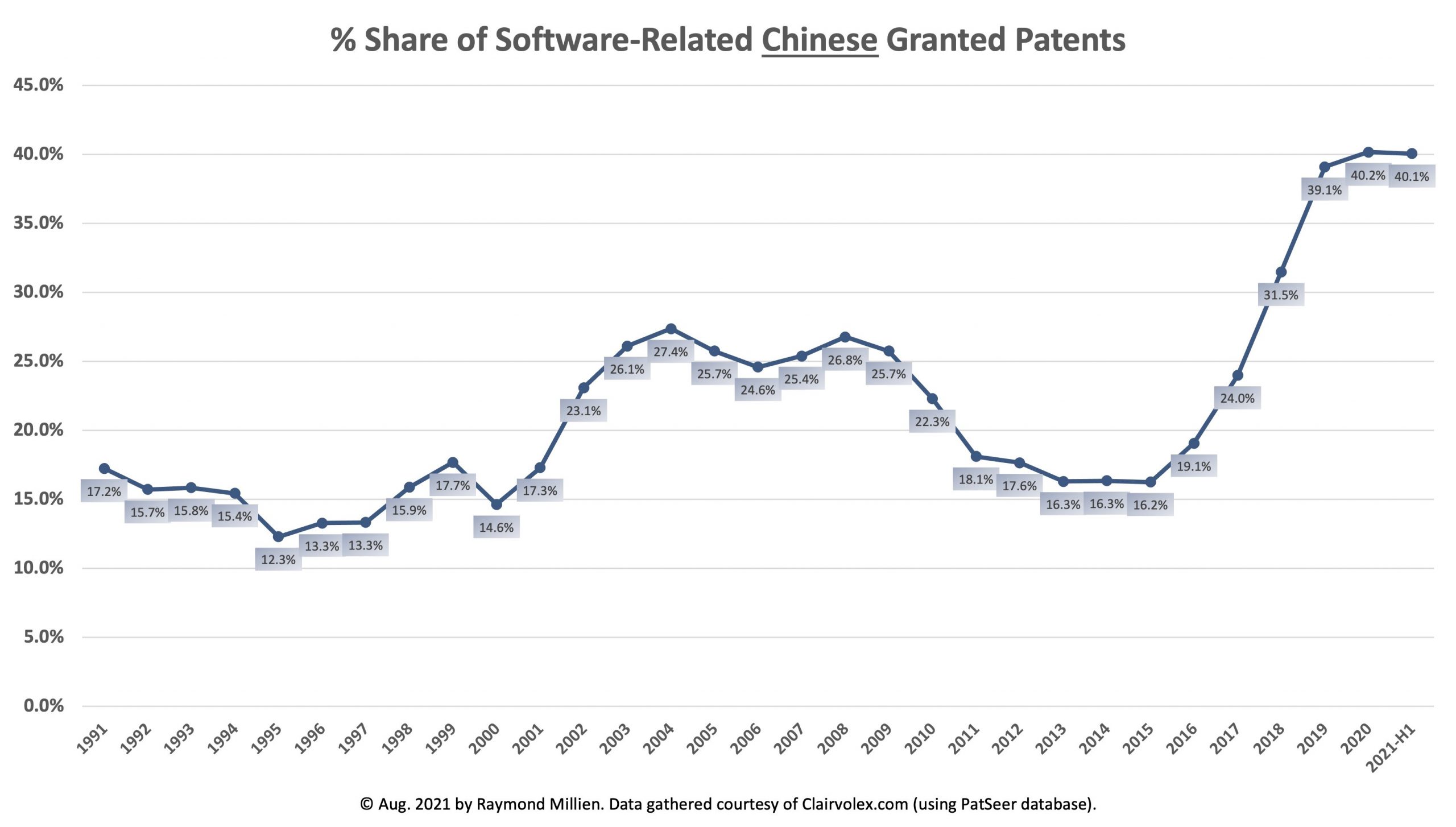 Digging deeper into these numbers, we found that the top 15 software-related U.S. granted utility patent assignees for the first half of 2021 were: 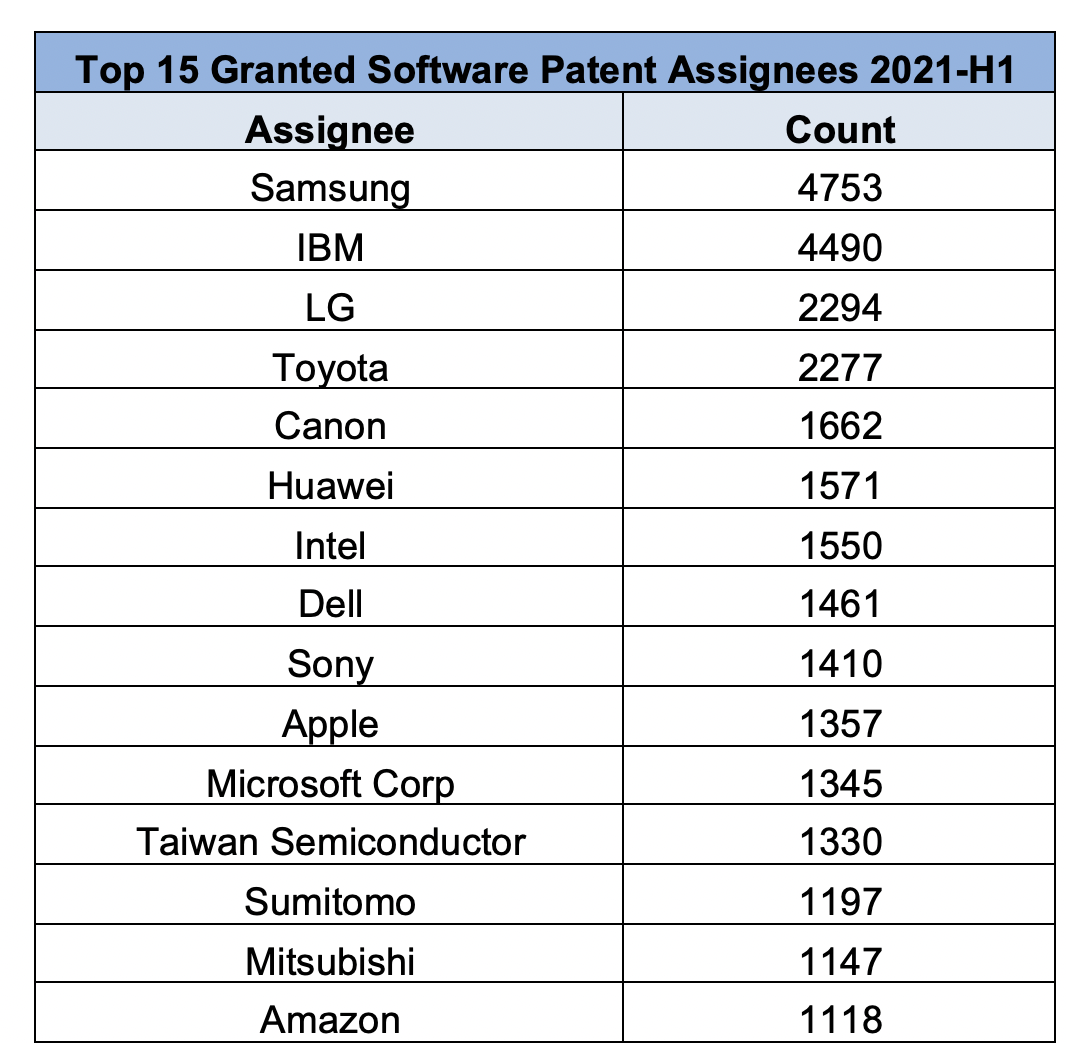 Meanwhile, back at the U.S. patent bar, the USPTO, Federal Circuit, Supreme Court, and Congress have not cleared the Alice Section 101 confusion. As former – and still to be replaced – USPTO Director Andrei Iancu stated in his farewell speech at the U.S. Chamber of Commerce on January 19, 2021, “Will [we] finally resolve this issue that has plagued our [patent] system for the past decade?” We’re still waiting…

Raymond Millien Raymond Millien, is the Chief Executive Officer of Harness, IP, where he oversees the firm’s operations, including HR, Finance, Marketing/Business Development, IT, and Docketing. He has been named one of [...see more]

Yi Chen is Intellectual Property Counsel at Volvo Cars in Shanghai, China, overseeing the company’s IP matters in the APAC region. In addition to her IP role, Yi also serves as the [...see more]