Alice Who? Over Half the U.S. Utility Patents Issued Annually are Software Related! 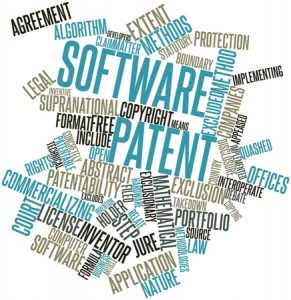 I am continually amazed that for over a decade the legal, technical and academic communities have debated the issue of software patent eligibility. Many trees have been killed in the form of articles, blogs and law review articles devoted to both sides of the debate, not to mention the lobbying dollars spent. Further, the Supreme Court’s most recent ruling on the issue, Alice Corp. v. CLS Bank has left the IP bar without a clear, reliable test to determine when exactly a software (or computer-implemented) claim is patentable versus being simply an abstract idea “free to all men and reserved exclusively to none.”

This has left us with a myriad of USPTO Section 101 guidelines, flowcharts, presentation slides, reference sheets, and case law charts interpreting Alice and its progeny of district court and Federal Circuit cases—the totality of which merely confuse and distract the USPTO, courts, and practitioners from focusing properly on Sections 102 (novelty) and 103 (obviousness). The net effects are increased cost, lower patent quality, and in some instances even the denial of patent protection for software inventions.

I have always argued that software patent eligibility is a must in a country where patent rights are guaranteed by the Constitution. That is, all fields of innovation should be treated equally under the law such that one field of endeavor (e.g., pharmaceuticals or electronics) is not deemed more “patent worthy” than other fields (i.e., computer science and information technology). This is especially true when one considers how important software is to the U.S. economy as evidenced by the following facts and figures:

Add to the above the fact that we are at the beginning of the Fourth Industrial Revolution – the age of the Internet of Things (IoT) – where many companies are undergoing “digital transformations.” This involves not only implementing digital processes (i.e., replacing labor with software) but also using software to analyze the big data sets collected from hardware (and people) equipped with sensors that are wirelessly connected to the Internet.

In sum, a substantial amount of U.S. commerce is software-dependent and the associated innovation in the field – when novel and non-obvious – deserves stable and predictable patent law protection! As further evidence that software must be patent eligible – on both policy and legal grounds – patent activity at the USPTO tells a compelling story. Using data from the USPTO, I sought to determine what percentage of USPTO issued utility patents are “software related.” To define what patents are “software related,” I utilized the same methodology employed by the United States Government Accountability Office in a 2013 IP litigation report to Congress. That report relied on certain classes and subclasses of applications most likely to include patents with software-related claims as selected by expert advisors to the USPTO. With respect to the selection of classes and subclasses that comprise “software patents,” these experts acknowledged:

“[I]dentifying patents with software elements can be a tricky business. … While this definition will certainly be both over-inclusive and under-inclusive, the method is calibrated to help us identify classes in which patents with software claims are most likely to be found. As shorthand, we refer to those applications or patents which falling to these classes and subclasses as “software” applications or patents, and to those which fall outside as “non-software,” with the understanding that this nomenclature is one of convenience, and will not be accurate in all cases.”

After settling on this methodology, I enlisted the assistance of patent analysis firm GreyB Services to tabulate the issuance rates of those classes and subclasses [Id. at n.7] for the last quarter-century to produce the following two figures: 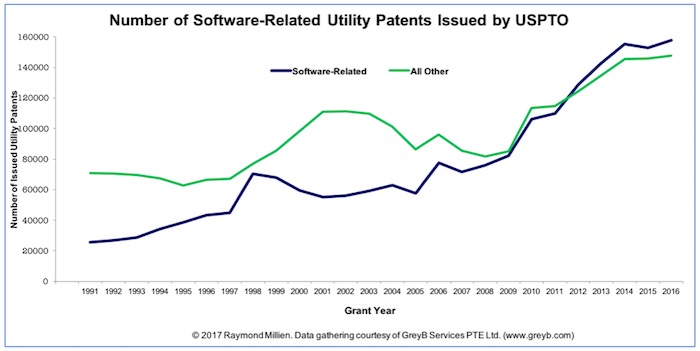 While I will leave to the reader the bulk of the interpretation of the data – including year-over-year trend observations – some conclusions stand out:

Thus, I think that Congress, the courts, and the USPTO must end their assault on Section 101 and software patents. The latter two must return to a proper focus on Sections 102 and 103. Further, the USPTO must continue to prioritize improving patent quality and pendency times. Anything less is simply counterproductive to the digital age in which we live.

This article reflects my current personal views and should not be necessarily attributed to my current or former employers, or their respective clients or customers.

Raymond Millien Raymond Millien, is the Chief Executive Officer of Harness, IP, where he oversees the firm’s operations, including HR, Finance, Marketing/Business Development, IT, and Docketing. He has been named one of [...see more]