Rain, rain go away! Is weather modification a real possibility? 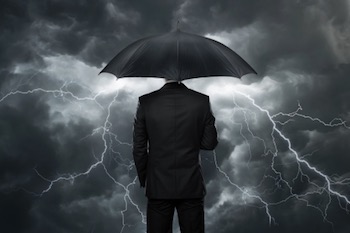 Is weather modification, or control, a real possibility? If you search for patents dealing with weather controlling technologies, it seems like it’s more of a reality than at first thought. This study is known as Geo Engineering, a deliberate intervention in the Earth’s natural system to counteract climate change.

One of the earliest weather-related patents was filed in 1891, US0462795 Method of Producing Rain-Fall, and invented by Louis Gathmann of Chicago, Illinois. His invention was designed to produce a condensation in the atmosphere with liquefied carbonic acid gas so that a cloud could be formed to make it rain. His idea was to store the gas in a suitable shell or casing that could contain an explosive, either gunpowder or dynamite, which was thrown or shot in to the upper regions of the atmosphere. Really makes me wonder how many things he blew up as a kid!

Another early US patent comes from Paul Weiss filed in 1917, US1338343 Process and Apparatus for the Production of Intense Artificial Clouds, Fogs, or Mist. The invention produces artificial mists big enough to be clouds. Imagine using a machine like this in a time of war where you could create your own clouds to conceal airplanes or drones? While the invention doesn’t speak specifically to a “party fog machine” application, this patent was eventually cited by another invention that did produce fog that was safe to breathe and used in theatres for special effects!

Jump forward a few years to 1925 and Donald Salisbury’s oddly titled weather-related patent, US1928963 Electrical System and Method. Don’t let the title fool you…this is one of the first patents to dissolve clouds and fog to produce rain. For this time period, this patent became a very important leader and has been cited over 30 times in technologies like the ones listed in this text cluster.

So if there are patents that could potentially make it rain, are there patents that could stop the rain? If you have seen the news recently, the U.S. State of Texas has been under severe flooding conditions for the past month. Texas’ Capitol City of Austin is one of the most flash-flood prone regions in North America, and this flooding is the number one natural disaster threat to this area. Further, Central Texas is actually known as Flash Flood Alley.

No one really knows if this is actually possible, but take a look at US6315213 Method of Modifying Weather by Peter Cordani. Filed in 2000, this patent uses polymers to absorb aqueous solutions and by seeding clouds with these polymers, you could potentially absorb all the water from the clouds before it rains. So you ask, what happens to the polymers once they absorb the water? Well those are dehydrated to a powder…now they just need to make that powder smell fresh and clean like a rainstorm!

Geo Engineering, or climate engineering, is a delicate, hotly debated topic of conversation. Some find it good for the planet, some find it terrible – either way building trust between the scientists who study it and the general public is important for our future. Could we stop climate change by tinkering with the atmosphere and the weather? Could we do more damage? With so much that remains unknown regarding how Geo Engineering may affect the planet, it is too early to assume that every change will be beneficial. What we do know is that climate change can be seen across the world and it’s changing on a global scale.

Better recycling efforts have led to greater awareness of what we are using, while others are working towards conservation and maintenance of wild lands.

If you have any thoughts on this subject or have seen some interesting patents or applications in this area, drop me an email! Save the Planet…it’s the only one we have!