“We did about as good as we could have hoped for,” Landreneau said. “We did it all and didn’t get arrested.” 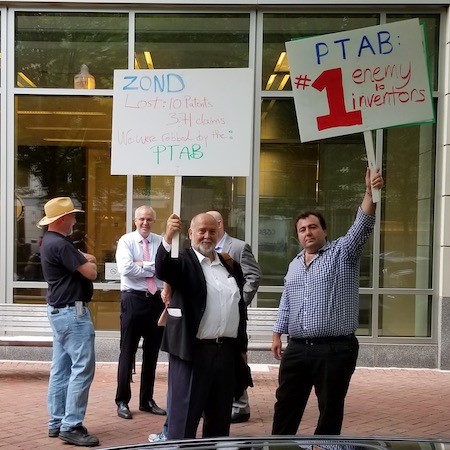 On Friday, August 11th, inventor rights group US Inventor held an event at the U.S. Patent and Trademark Office where the group honored excellence in high quality patent examination. US Inventor also staged a peaceful protest to raise issues surrounding high rates of patent invalidation resulting from decisions made by the Patent Trial and Appeal Board (PTAB). Despite going on with the protest after the USPTO denied a use permit application for the event, a source from the event reports that all planned aspects of the protest, including the burning of patents in clear view of the USPTO, occurred without anyone going to jail.

Randy Landreneau, a member of US Inventor’s managing board, said in a phone interview that the day’s events seemed to be very successful from the viewpoint of those protesting. “We did about as good as we could have hoped for,” Landreneau said. “We did it all and didn’t get arrested.”

According to Landreneau, patent owners and others taking part in the protest began to arrive to the USPTO facilities in Alexandria, VA, around 7:30 AM Friday morning and began the day handing out flyers to anyone passing by. A picture we received this morning from Josh Malone, Fellow at US Inventor, shows current USPTO Acting Director Joseph Matal speaking with Paul Morinville of US Inventor along with Roman Chistyakov and Bassam Abraham of Zond, a company that saw a total of 371 patent claims invalidated by the PTAB after being faced with 125 petitions for inter partes review (IPR) proceedings. “We were happy that we were out there protesting and trying to bring these PTAB issues to light,” Landreneau said.

“Today’s peaceful demonstration underscores the PTO’s erroneous denial of US Inventor’s permit application,” explained patent attorney Matthew Dowd, who represented US Inventor in an appeal of the denial of the use permit. “The PTO did not explain its decision and did not provide any guidance on what it believed would be a reasonable time, place, and manner restriction on US Inventor’s ability to express its views on the patent system.   Nonetheless, US Inventor took a stand and lawfully exercised its First Amendment rights in a public forum.  Today establishes an important precedent for those who wish to express their views about the patent system.”

At a little after 11 AM, US Inventor commenced a ceremony in which the group handed out awards to patent examiners to recognize excellence in patent examination at the USPTO. One examiner was there to accept an award. According to Landreneau, the low attendance could be due to examiners being out of town or some examiners feeling pressure from supervisors regarding their attendance at the event.

After the examiner ceremony concluded, inventors went to the front steps of the USPTO and lit their patents on fire. According to Landreneau, a total of six patents were burnt in this manner. Multiple major news outlets filmed the event including BBC, FOX and C-SPAN. “Hopefully, this will really get the message out,” Landreneau said.

No arrests were made despite the denial of the permit, and the police and others on the scene allowed the protest to go on as previously scheduled. “The Alexandria Police Department, the Alexandria Fire Department, and the Federal Protective Service must be thanked for facilitating a successful event,” Dowd explained.

Matal showing up to the protest and speaking with Morinville and some of the other protesters was a very smart move. Rather than further antagonize the situation and relationship with inventors the USPTO seemed today to go out of their way to acknowledge the protest and allow it to continue, although just yesterday at least some at the USPTO were trying to stop the protest without much, if any, explanation. Acting Director Matal taking time to personally make an appearance should strike those rightfully concerned about the PTAB as a meaningful gesture and will hopefully demonstrate a turning of a page. Time will tell. 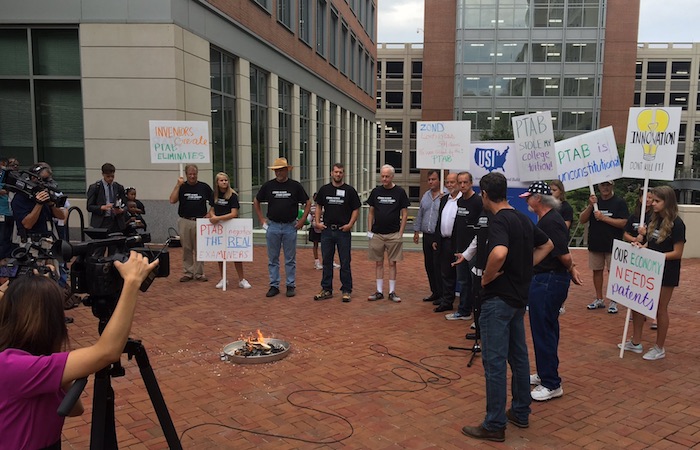