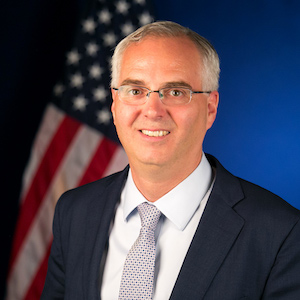 Late in the afternoon on Wednesday, June 7th, it was announced that U.S. Secretary of Commerce Wilbur Ross had selected Joseph Matal, formerly U.S. Patent and Trademark Associate Solicitor, to serve as the interim director of the USPTO.

Although we have characterized Matal as “Acting Director,” the announcement does not specifically identify Matal by that title, instead noting that he will perform the functions and have the responsibilities of the Director during the nomination and confirmation process for the next Director. Perhaps a linguistic nuance, but then again there is always the possibility that the nuance is purposeful. If Matal were to be Acting Director of the USPTO he could not be nominated to serve as Director and continue to serve in an “acting” capacity. See NLRB v. SW General, Inc. Perhaps this is much ado about nothing. Increasingly the DC rumor mill seems to believe the lead candidate for the nomination is Andrei Iancu, the Managing Partner of Irell & Manella LLP.

But who is Joe Matal? Inside the beltway Matal is a well known entity, having served as a Staffer in the Senate and responsible for ushering the America Invents Act (AIA) through the Senate. Matal is no doubt less well known by the broader patent community in the trenches.

While Matal’s intimate involvement with the passage of the AIA will no doubt be upsetting to many stakeholders who are rightfully unhappy with the evolution of the Patent Trial and Appeal Board (PTAB), it is difficult to predict how Matal views the PTAB given his Washington experience has to date been in support positions. Further, in all likelihood Matal has been placed in position as a trusted Republican loyalist at a time when there were increasing questions about the wisdom of maintaining Lee, an Obama holdover, in the position of Director. Still further, if the rumor mill is accurate it would seem that Secretary Ross is close to making a recommendation to the President on the next Director, so it would seem unlikely that Matal would be in the top decision-making role at the USPTO for more than several months, which is hardly time to engage in anything particularly substantive.

Notwithstanding, Matal being plucked from the Solicitor’s Office and put in place over Commissioner for Patents Drew Hirshfeld and the many other senior level managers seems significant. While Matal himself may not be in the running for the post of Director, he could very easily wind up as the next Deputy Director of the USPTO. And while this move may strike many as odd, recall that at the beginning of the Obama Administration a similar move was made when then Secretary of Commerce Gary Locke brought former Patent Commissioner and Acting Director Nick Godici back to the Office on an interim basis, also during a similar period while the nomination and confirmation process unfolded. So a move to put a trusted alley in position is certainly not unprecedented.

Finally, we are hearing some say that Matal has no patent experience, which is simply not true. While we have not always agreed with Matal (particularly during the AIA debates) there is no doubt that he does have sufficient patent experience for the position, although not patent prosecution experience. Matal is likable, knowledgeable, and has been a key assistant to several powerful Republican Senators. While the track record of Staffers coming to run the USPTO many not be great in the opinion of many patent practitioners, Matal taking over the Office in the interim should be well received by politicos who have wanted loyalists to be put in positions of authority at agencies.

We are cautiously optimistic this is a step in the right direction, while at the same time cognizant of the legitimate fears of those who would have preferred someone more obviously likely to view the PTAB with the healthy skepticism that is so rightfully deserved.

The Ross announcement notes Matal’s experiencing in briefing and arguing appeals of patent and trademark cases at the Federal Circuit, as well as his prior roles as counsel for former Sens. Jeff Sessions and Jon Kyl.

Matal’s LinkedIn profile notes that he had served as USPTO associate solicitor since August 2012, although he was recently detailed to senior staff to be Chief of Staff to Michelle Lee for several months before returning to the Solicitor’s Office.

Between January 2011 and August 2012, Matal served as Kyl’s counsel on the U.S. Senate Committee on the Judiciary, helping to co-manage Senate floor consideration of the America Invents Act (AIA), negotiate bill compromises with the House of Representatives, explain bill provisions to Senators along with House and Senate staff as well as draft provisions of the bill. After the AIA passed Matal wrote a comprehensive guide detailing the legislative history of the AIA, which is largely regarded by those in the industry as the authoritative treatment of the AIA from the first hand perspective of a key Staffer.

The articles discuss the AIA’s revisions to Section 102 and Section 103 of U.S. patent code, the creation of derivation proceedings, changes to the inventor’s oath, the authorization of third parties to submit prior art, bans on tax-strategy and human cloning patents, provisions concern post-grant review proceedings, inter partes proceedings, supplemental examination, section 18 business-method-review program, the new defense of prior commercial use, partial repeal of the best-mode requirement and deadlines for seeking a patent term extension.

Between May 2009 and January 2011, Matal served as counsel to Sessions, then ranking member on the Senate judiciary committee. During that time, he also negotiated and drafted provisions of the bill, which would become the AIA. As well, his resume notes that he was a member of the senior leadership team for the Senate judiciary committee’s Republican membership, supervised lawyers and provided advice on legal, policy, legislative and political matters. Before that, from April 2002 through May 2009, Matal served his first stint as Kyl’s counsel with the Senate judiciary committee. During this time, Matal drafted and managed enactment of legislation on patents, copyrights and trademarks along with the False Claims Act, Federal Indian law, First Amendment issues, bankruptcy, whistleblowers, class-actions, Federal-question jurisdiction, criminal and national security matters.

Matal’s experience with Senate judiciary matters extends all the way back to March 2000 when Matal began a two year-stint as policy director for former Sen. Peter Fitzgerald. Matal advised Fitzgerald on Judiciary and Commerce committee matters, including Fitzgerald’s questioning of Enron witnesses as well as drafting materials regarding telecommunications, trade and defense matters.

Prior to working for Sen. Fitzgerald, Matal was an associate attorney at Gibson, Dunn & Crutcher LLP where he served as a member of the appellate and constitutional law practice group. While at Gibson Dunn, Matal also drafted U.S. Supreme Court certiorari petitions in at least one First Amendment case and worked on briefs in FOIA, FIRREA, CIRCLA and IGRA cases. Matal also served as a law clerk for the U.S. Court of Appeals for the Ninth Circuit (Sept. 1997 to Sept. 1998) and at the Alaska Supreme Court (Sept. 1996 to Sept. 1997).

Matal completed his undergraduate studies at Stanford University in 1993, graduating with a bachelor’s degree in public policy and English. While at Stanford, Matal participated in both the Stanford Debate Society and the Stanford Review. He obtained his J.D. doctor of law degree in 1996 from the University of California Berkeley School of Law, where he was also a member of the Order of the Coif national honors society and served as an articles editor for California Law Review.