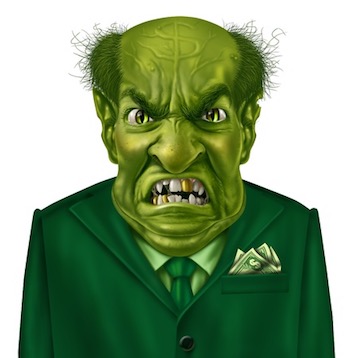 Recently I wrote about how the Supreme Court’s decision TC Heartland will, in my opinion, not be as disruptive as some are making it out to be. See Is the Supreme Court’s venue decision anti-patent? In that article I acknowledged, as I often do, that there are certainly some bad actors that abuse the patent litigation process and seek extortion-like settlements. There are bad actors out there on the patent troll side; there really cannot be any serious discussion to the contrary. Those bad actors, however, are few in number, which you wouldn’t know based on media coverage and the never ending call for patent reform by those who prefer to take technologies they did not innovate rather than pay a reasonable royalty to innovators.

The media, Congress and public have been misled with respect to the so-called patent troll problem. This has been accomplished by a masterful public relations campaign and a sadly disinterested and unengaged audience that buys sound bites that fuel their predetermined notions and agendas. The truth, however, is that the so-called patent troll problem has been created in significant part simply by gross over definition of what qualifies one to be called a patent troll. Indeed, there are entities that define all patent owners that seek to enforce their patents through litigation or licensing as patent trolls. Does that make sense to anyone? If that is the definition of a patent troll that means even those entities that are constantly lobbying for more patent reform and complaining about patent trolls are patent trolls themselves. Google and Uber are locked in a patent battle over self-driving automobiles, so does that make Google and Uber patent trolls? What about General Electric, Apple, Samsung, Microsoft, IBM, Cisco, Oracle, Whirlpool, Kraft Foods, Caterpillar, Seiko Epson, Amgen, Bayer, Genzyme, Sanofi-Aventis, and Honeywell, to name just a few?

If you stop and think about how some define patent trolls and other bad actors it becomes an absurdity of rather epic proportions. Obviously, seeking to enforce patents or licensing patents cannot make you a patent troll and does not mean you are a bad actor. And neither can the fact that you don’t make anything given that pretty much no American technology giant makes anything themselves, instead preferring to have products made in China and elsewhere around the globe by others and then imported.

So not only is the infringer lobby responsible for the so-called patent troll problem, and not only have they slapped the patent troll label on the innovators of the products and services that they take (i.e., steal), but they’ve successfully managed to somehow avoid anyone noticing that based on their own definitions they are patent trolls themselves! While the message is horribly, and intentionally, misleading you do have to admire just how successfully they have managed to both insulate themselves while leading the media, judges and Members of Congress by the nose as if they were wearing an ox ring.

Why would the infringer lobby want to lose the patent troll narrative? It is enormously successful and allows them to parade dubious (to be generous) reports that don’t get any real scrutiny by the mainstream. Simply wave the patent troll flag and facts, truth and intellectual honesty no longer matter.

There is little better proof that the infringer lobby doesn’t want to do anything about the so-called patent troll problem than the failure of the TROL Act during the 114th Congress.

The infringers didn’t support the TROL Act because it would have passed and it would have been successful to eradicate those bad actors they complain about so often. With the TROL Act passed and successful the infringer lobby wouldn’t be able to get any of the other items on their wish list without the boogey man of the patent troll being available as the straw man foil.

If something like the TROL Act did pass we could finally get past all this nonsense about the egregiously bad actors that engage in nothing more than extortion-like activities. Perhaps then we could have a real discussion about patent assertion entities that do own solid patents on meaningful technologies outside the shadow of a caricature of a boogey man made up strictly for PR purposes and to achieve the unilateral dismantling of the U.S. patent system. We are long overdue for a realistic, substantive discussion about the good done by a licensing industry that facilitates transactions, rewards inventors, and returns capital to the investors who supported the invention in the first place. See Academic Patent Licensing Helps Drive U.S. Economy.

The importance of licensing cannot be overstated. The founding fathers specifically intended to create a patent system that was affordable for individuals in contrast to the patent system in the UK. But that meant that the individuals getting the rights would not be in any kind of financial position to manufacture. The entire U.S. patent system was, therefore, set up in order to facilitate licensing. Approximiately 70% of inventors in the early days did not even graduate from high school. So the U.S. patent system from its earliest days was set up to encourage inventors to do what they did best — invent. They would be given rights that they could then license to manufacturers and others who controlled channels of distributions so they could do what they did best — make and sell. It was an intentionally symbiotic relationship.

If something like the TROL Act could pass and we can get past the truly bad actors that engaging in nothing more than courtroom extortion we could have a real discussion about how NPEs/PAEs that own solid patents and license industry so they can engage in business, we could have a meaningful discussion about the good that is being done in terms of facilitating transactions, rewarding inventors, returning capital to the investors who supported the invention in the first place and/or who purchased the patents thereby returning capital to inventors so the entire process could repeat.

As we consider all of this it is also important to keep in mind that the U.S. tech sector spending on patent trolls is less than 1% of all IT spending. Even if you use the egregiously inflated (and thoroughly debunked) $29 billion number patent critics erroneously claim as the “cost “of patents you get at best a rate that is 3.1% of all IT spending. See Doing the Math on Patent Trolls.

These numbers seem to on their face do nothing more than reflect a reasonable (if not lower) royalty one would expect in an arms length negotiation. So while the numbers can be made to look very large and certain verdicts capture great attention, the tech sector in the U.S. is close to $1 trillion (if not larger). The so-called patent problem is never put into that appropriate context, and all of this trashing of the patent system is because the tech sector does not want to pay even a modest royalty for what they are using.

A $1 trillion a year industry not wanting to pay innovators less than a 1% royalty on the innovations they appropriate (i.e., steal) for their own profits seems like a terrible price to pay given the national security and economic consequences of forfeiting our world leadership to the Europeans and Chinese.