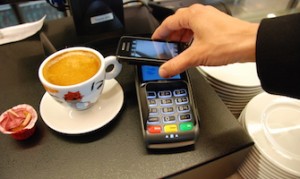 “Mobile Payment 03” by HLundgaard is licensed under CC BY-SA 3.0.

Once again, Google and Apple are shaping up to become major competitors in a field of mobile technology which is increasing in availability among consumers. With its late February acquisition of digital mobile wallet provider Softcard, a mobile payments app supported by Verizon, AT&T and T-Mobile phones, Google and its Google Wallet system have become the main rivals to Apple Pay.

Google is a high tech developer which has matured to the point that many of the inventions that it makes commercially successful come from start-ups outside of the company. As we reported last November in our brief history of the wildly popular Android mobile OS, the software that has come to dominate a large portion of the mobile communications market was originally developed by a smaller startup which Google bought to commercialize Android. With a growing interest in digital payment systems, Google’s acquisition of Softcard comes at a similar moment in time for a different burgeoning industry.

An important aspect of both this Softcard purchase and the acquisition of Android, Inc., is the intellectual property held by those companies which is now the legal property of Google. In fact, as Forbes points out, Softcard’s patents and their ability to protect Google Wallet against any potential legal challenges from Apple may be a much more important aspect of the acquisition than Softcard itself, which had struggled financially and laid off workers in the weeks leading up to Google’s purchase. There are many reasons for Softcard’s woes, including a need to rebrand the company after its original name, Isis, was co-opted by the Middle Eastern terrorist organization.

If the old adage about love and hate being the same thing is true then Google’s outlook on patent rights in the United States makes at least some sense. However, with Google taking more of an activist stance in regards to our country’s patent system, it is worth noting that the company is spending millions of dollars in order to have a larger voice. Throughout 2014, Google spent $17 million on lobbying activities and spent the most amount on patent reform out of any technology company. Google also enjoys a fairly close relationship with President Obama, for whom the company donated $800,000 during both of his presidential campaigns.

There are many, however, who have noted some troubling aspects of the patent system overhauls being supported by Google. In an interview conducted by IPWatchdog founder Gene Quinn with Ken Blackwell, a conservative thought leader and former Cincinnati mayor and Ohio secretary of state, Blackwell cautioned against Google’s influence in the patent system: “If you agree it is a bad idea when corporate interests are in the front seat driving government policy, then you should be worried about the administration and Congress acting so aggressively to overhaul the patent system to advance the financial interests of Google and others.”

As that interview points out, it’s a little mind-boggling that a Republican controlled Congress would take such a liberal approach for government intervention. The most recent patent reforms were just established by the America Invents Act of 2011, and there have been numerous changes to the law of patent eligibility over the past several years in the United States Supreme Court. The “conservative” thing to do would be to wait and see how those reforms and substantive changes coming via case law affect the patent system over a period of years. There’s already evidence to show that cases of patent litigation are dropping, and publicly available data does not show there to be a patent litigation explosion in the same way the secret, unverifiable proprietary RPX data suggests. Nevertheless, once again supporters of patent reform, including Google, are coming back to Congress for more even before the dust has settled.

At the same time that Google is supporting efforts to curtail patent infringement litigation, the company is also adding large quantities of property to its intellectual property portfolio. In 2014, Google was 8th among all companies receiving U.S. patents and its jump from 11th-place the previous year was the greatest movement near the top of that list. The company’s 2,566 utility patents last year represented an increase of about 39 percent over 2013’s totals. These patents are in addition to those acquired by Google through deals like their deal to acquire Softcard. So someone at Google must really like patents and understand them to be valuable, otherwise they are just wasting shareholder money, which is another issue for another day.

While it is good to see a company inventing such a large number of technologies, it’s at least a little troubling to see how much more effective Google has been at using the patent system to their advantage. At a time when patents are a hot topic few companies are fully engaging in the debate in the public way Google has, which makes for a PR blitz that is significantly slanted toward the Google viewpoint.

The Google viewpoint, at least if you listen to their lobbyists, is that patents on software are unnecessary, undesirable and unwise. But since the AIA instituted a fast track program for patent examination, Google has received 875 patents through that program, which guarantees a patent decision within 12 months, usually within 6 months. That’s 14 percent of all patents whose examinations have been expedited by that process. In addition, 97 percent of all other entities pursuing fast-tracking for their patents have received less than 10 patents. So Google is pursuing patents with the zeal of a startup company, and at the same time doing everything they can to weaken the patent system. It truthly is a love hate relationship Google has with patents.

Indeed, there is a schizophrenic aspect to Google’s patent positions. They seem to highly value their own patents, which is hardly surprising given that the company was founded on a page rank algorithm patent application that was originally filed even before the company acquired the domain name Google.com. Today at the same time that they aggressively pursue patents on their own technologies and aggressively acquire innovative startup companies with intriguing patent portfolios, they are also lobbying for reforms that would significantly and negatively impact innovators.

If there is a big picture strategy it is not readily apparent.  Although, based on their actions, one could reasonably conclude that we have a patent system that supports Google innovation better than American innovation.

The Near Future of Digital Wallets and Mobile Payment Systems 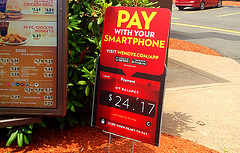 As a result of Google’s acquisition of Softcard, Google Wallet will now come pre-installed on Android phones marketed by Verizon, AT&T and T-Mobile. That will increase the size of the Google Wallet platform significantly, giving it the chance to catch up to Apple Pay, which currently processes about $2 of ever $3 in contactless mobile phone payments across major credit card networks.

However, there are other disturbances on the horizon coming from half a world away. Around the same time that Google was finalizing its acquisition of Softcard, South Korea-based Samsung purchased mobile payments and commerce platform LoopPay of Woburn, MA. The platform enables mobile payments through a magnetic reader rather than the near field communication (NFC) chips utilized by Apple Pay and Google Wallet. Retailers have been slow to upgrade their point-of-sale (POS) systems to accommodate those NFC-based systems, while Samsung estimates that its LoopPay system could work with 90 percent of existing POS terminals.

No matter who wins the mobile digital wallet market, that company will still have quite the mountain to climb to take the lead in online digital payment processing. That spot is currently occupied by PayPal, which was responsible for 78 percent of all digital payment dollars processed last November. PayPal’s total payment volume for 2014 was $64.3 billion. According to some forecasts, however, U.S. mobile payments could rise as high as $142 billion by 2019, so the next few years will likely see a lot of volatility as an increasing number of firms vie for success in a sector which consumers are accepting more each day.