“I cannot think of a better place to have had a fulfilling career than at the USPTO.” – Drew Hirshfeld 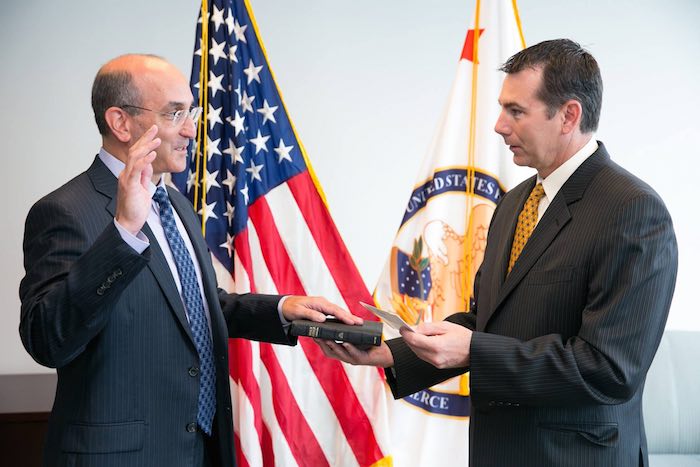 Drew Hirshfeld (left) being sworn in as Commissioner for Patents by USPTO Deputy Director Russ Slifer.

United States Patent and Trademark Office (USPTO) Acting Deputy Under Secretary of Commerce for Intellectual Property and Acting Deputy Director Drew Hirshfeld will step down from a nearly 30-year career with the Office on June 21, the USPTO announced today.

Hirshfeld became Commissioner for Patents with the USPTO in 2015. He was appointed to a second five-year term in that role in July 2020. Before that, he served as Deputy Commissioner for Patent Examination Policy, and for two years as the USPTO Chief of Staff for David Kappos. He also served as a Supervisory Patent Examiner, as well as a Group Director of Technology Center 2100, overseeing Computer Networking and Database workgroups. Hirshfeld first joined the agency in 1994 as a patent examiner.

From January 2021 to April 2022, Hirshfeld was thrust into the wordy role of “Performing the Functions and Duties of Under Secretary of Commerce for Intellectual Property and Director of the USPTO” pending a Senate-confirmed Director. He announced in April, upon current USPTO Director Kathi Vidal’s confirmation, that he planned to leave government service this summer, but that he would serve as acting Deputy Director until a political Deputy Director was named.

The ambiguity of his title caused some controversy related to the Arthrex v. Smith & Nephew case, which said that Administrative Patent Judges (APJs) of the Patent Trial and Appeal Board (PTAB) are not considered unconstitutionally appointed inferior officers exceeding their authority if their decisions are subjected to the review of a Director who is nominated by the President and confirmed by the Senate. “Hirshfeld does not meet this requirement and cannot cleanse the Appointment Clause violation identified by the Supreme Court,” said IPWatchdog Founder and CEO Gene Quinn at the time.

Commenting on the announcement of his date of departure, Hirshfeld said: “I cannot think of a better place to have had a fulfilling career than at the USPTO, and I am excited to watch the agency progress at this critical time in our country’s history of fostering and protecting people’s intellectual property.”

Hirshfeld also complimented Vidal on her quick work to advance key issues, saying: “She is a great asset for the agency and the country. This agency is in great hands.”

Vidal credited Hirsfeld’s “steady demeanor and thoughtful, exceedingly fair approach to every decision” as setting the USPTO up for “further success.”

The announcement said the USPTO plans to name a permanent Deputy Director in the coming weeks.