“Hirshfeld has not been appointed within the meaning of the Appointments Clause, and any action he takes with respect to Arthrex petitions from the PTAB will be void ab initio. Expect litigation on this issue.”– Gene Quinn 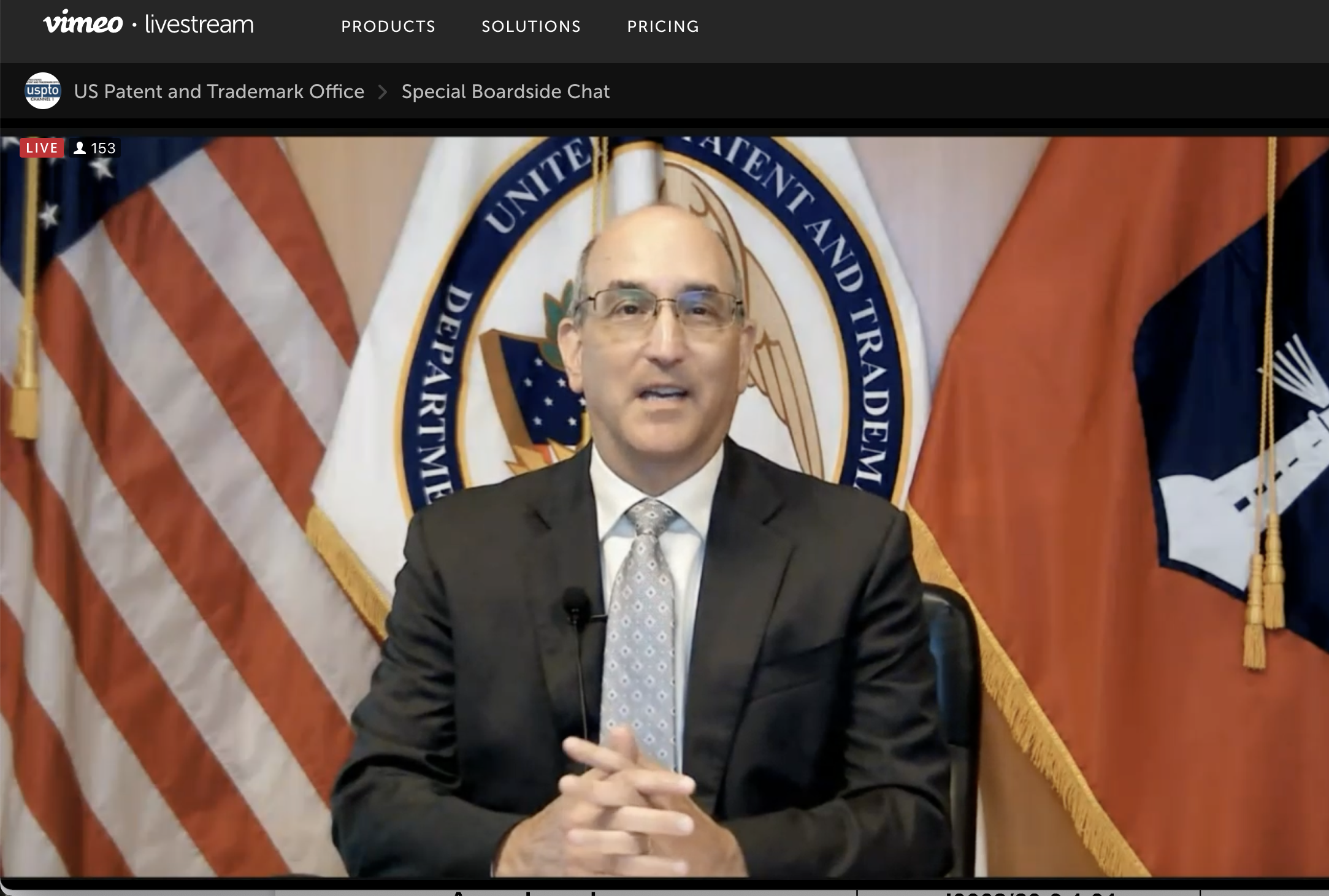 In the Arthrex ruling, the nation’s highest court found that the constitutional Appointments Clause violation created by the process for appointing administrative patent judges (APJs) to the USPTO’s Patent Trial and Appeal Board (PTAB) was best cured by review of APJ decisions by the USPTO Director. The new interim rule begins the process of determining how that review process will play out during the day-to-day operations of the PTAB.

According to a question-and-answer page regarding Arthrex on the USPTO’s website, parties will be able to request Director review of PTAB decisions during the interim phase of the rulemaking process by concurrently entering a Request for Rehearing by the Director into the PTAB End to End (E2E) electronic filing tool and submitting an email notification of the Request for Rehearing to an agency email account dedicated to receiving such notifications. Timely requests must be filed within 30 days of a PTAB final written decision (FWD) pursuant to agency regulations governing motion decisions codified at 37 CFR § 42.71(d). Requests for Director rehearing that are timely filed will reset the timing requirements for appeals of PTAB decisions or civil actions against the agency under 35 U.S.C. §§ 145 and 146 pursuant to agency regulations governing timing for appeals and civil actions codified at 37 CFR § 903(b). Director Review applies only to FWDs and not to institution decisions.

Perhaps one of the most pressing questions stakeholders have had is whether Hirshfeld himself will decide requests for Director Review, since he is not even an Acting Director, or if he will wait for a Senate-confirmed Director to be in place. Hirshfeld answered this definitively in today’s chat: “Yes, I have every intent to make decisions as Director and won’t be deferring until there’s a political appointee.” Final decisions under Director Review also will be made by the Director, not an advisory panel or other delegated party. While there will be an advisory group put together to make recommendations on review, similar to the Precedential Opinion Panel process, “they’re only a recommending body,” Hirshfeld said.

“While I think Drew Hirshfeld does a great job, and I have no questions about his ability or integrity, the USPTO is making a huge mistake,” said Gene Quinn, President and CEO of IPWatchdog, Inc. He explained:

According to the Supreme Court in Arthrex, Administrative Patent Judges of the PTAB are not considered unconstitutionally appointed inferior officers exceeding their authority if their decisions are subjected to the review of a Director who is nominated by the President and confirmed by the Senate. Hirshfeld does not meet this requirement and cannot cleanse the Appointment Clause violation identified by the Supreme Court. The Supreme Court couldn’t have been more clear: ‘Only an officer properly appointed to a principal office may issue a final decision binding the Executive Branch…’ Hirshfeld has not been appointed within the meaning of the Appointments Clause, and any action he takes with respect to Arthrex petitions from the PTAB will be void ab initio. Expect litigation on this issue.

Lots of Questions and Some Answers

Hirshfeld explained that three principles have guided the USPTO in issuing the interim guidance on Director Review: 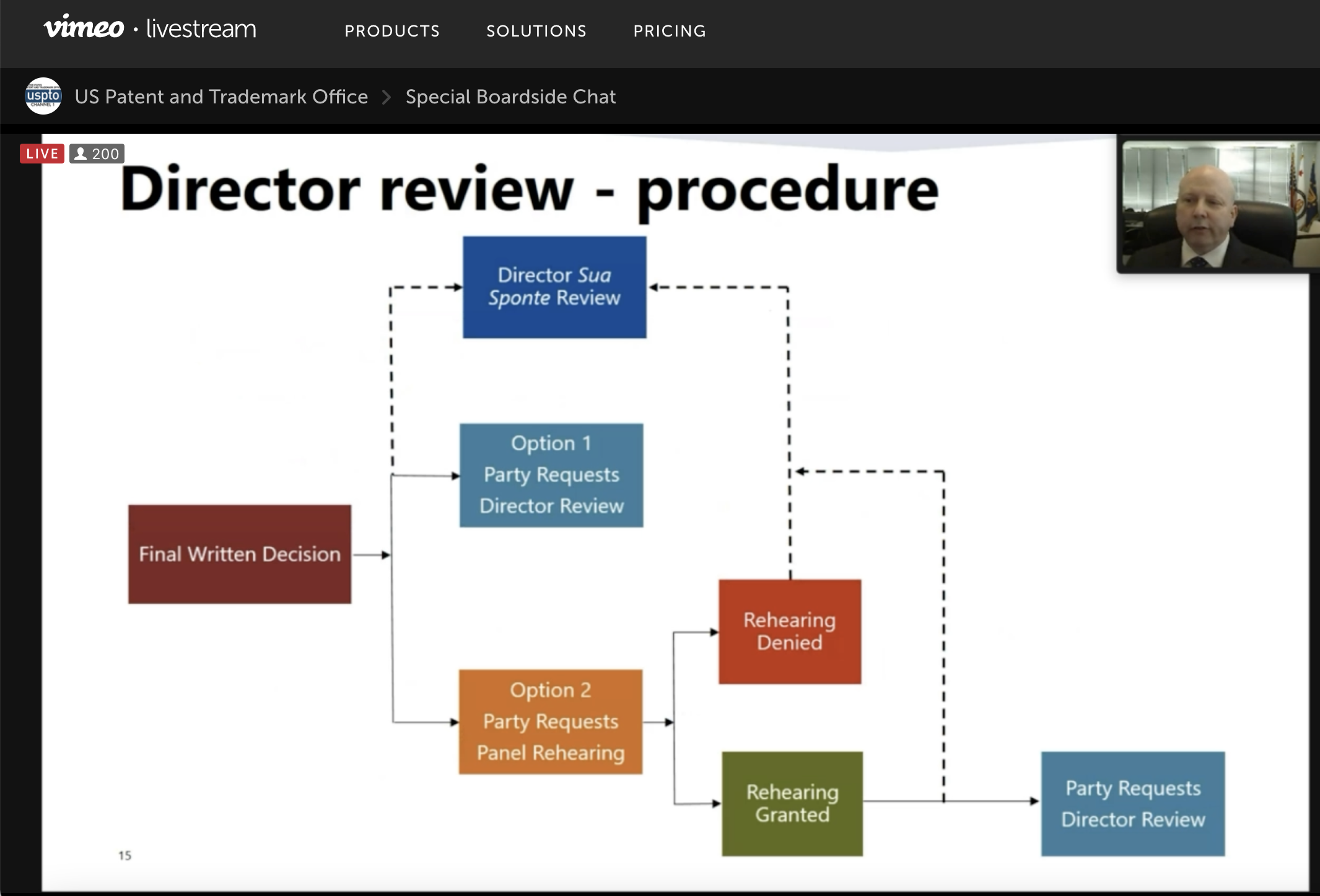 Boalick provided an overview of the process, explaining that the Director can review FWDs of inter partes reviews (IPRs), post grant reviews (PGRs) or covered business method patent proceedings (CBMs) sua sponte, or parties can request review. If the Director sua sponte implements review, parties will be given notice and an opportunity for briefing if the Director deems it helpful. Decisions will be reviewed de novo.

If Director Review is not granted and panel rehearing is not granted, only appeal to the Federal Circuit is available (see chart).

If Director Review is instituted, the Director can grant, deny or remand. If remanded, another decision will issue and then the original options are available to the parties.

With respect to procedural questions such as whether non-requesting parties will be able to file a response, if there will be oral argument, and whether amicus briefs will be allowed in Director Review proceedings, none of these is a matter of right, but the Director may choose to allow them. The Director also will not be bound by PTAB/ POP precedent and has full discretion to create new precedent. “The intent is not to go rogue and crazy, but where procedures might need to be updated this is a vehicle,” Hirshfeld said. 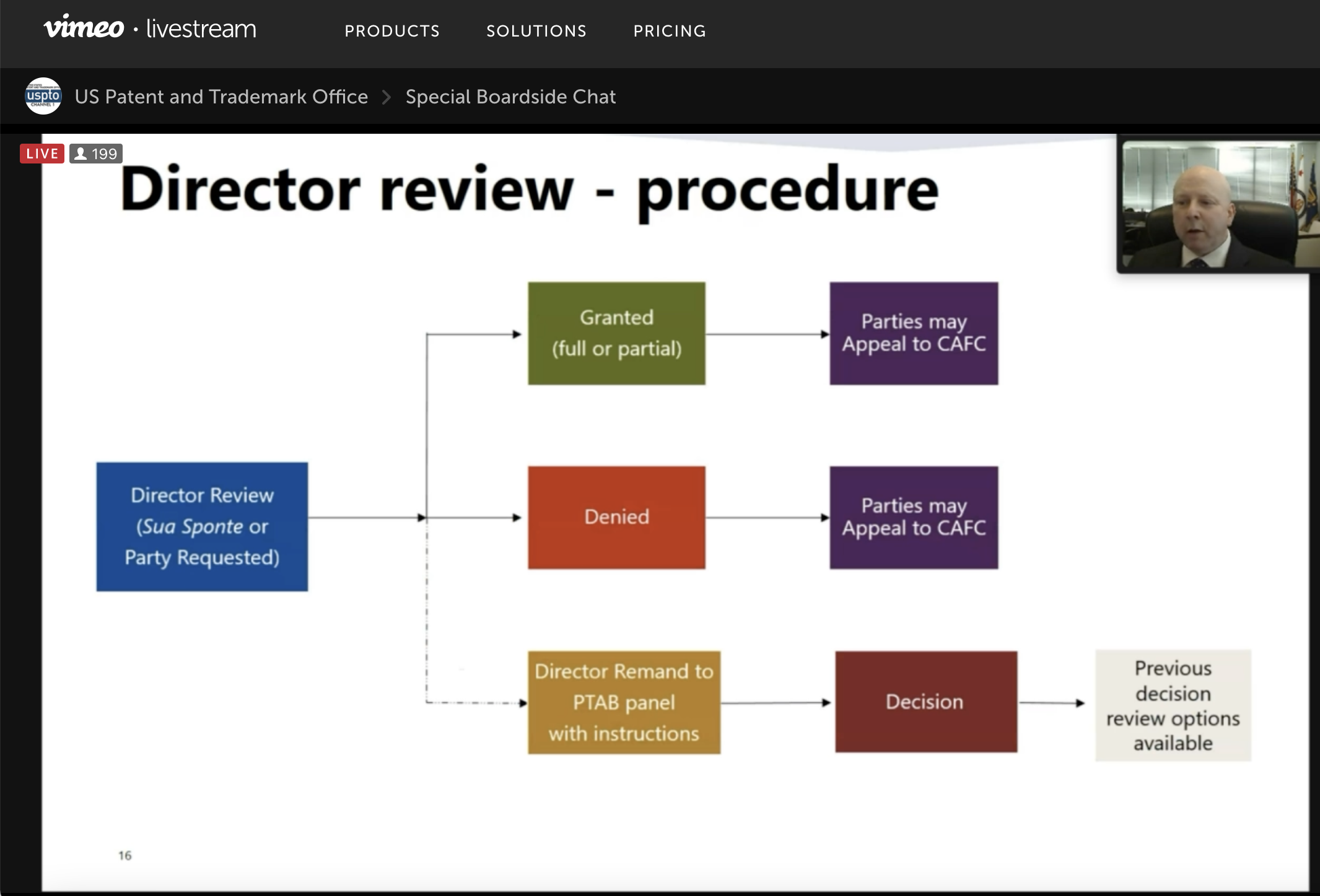 As to how the Office and PTAB will handle Director Review requests in the event they are flooded with them, Boalick and Hirshfeld said they will simply follow the same approach they took following SAS Insitute v. Iancu, which Boalick said forced the PTAB “to redo 40% of our docket.” “We’ll just reallocate resources. Essentially, in SAS, we allocated resources to get through the bubble without affecting pendency,” Boalick said.

Hirshfeld added that the Office will make sure to be cognizant of speed and timing and adjust resources on the group as necessary. “We’ve been thinking about this and preparing for every scenario,” he said.

As far as cases that raise Arthrex, which have been held in abeyance pending the Supreme Court decision, the Board will not be taking action yet, Boalick said, and he does not expect that the parties will take action yet either. The large majority of such cases were remanded by SCOTUS orders subsequent to the Arthrex ruling, though the Office is awaiting the Court’s action on one pending petition.

With respect to cases on appeal at the CAFC where a party has raised an appointments clause challenge, there are two such cases in which the CAFC has asked parties to file briefs on how they wish to proceed. The USPTO’s briefs in those cases are due July 21-22 “so stay tuned for our position,” Boalick said.

Several requests for Director Review have already been filed and the USPTO is evaluating them, said Weidenfeller. The Office intentionally has not addressed how the Director will decide which cases to review or what the criteria will be. The POP was for a specific purpose, to consider issues of exceptional importance,” Hirshfeld explained.  “This is much broader, so there’s no particular standard. But the more refined your argument the better.”

Today’s presentation is available here now and the video, when available, will be on the Boardside Chat page of the USPTO website.