“It’s not up to antitrust laws and enforcers – if Congress wants to do that, they are perfectly capable…but it shouldn’t be up to the courts and it certainly shouldn’t be the role of antitrust enforcers to step in.” – Makan Delrahim 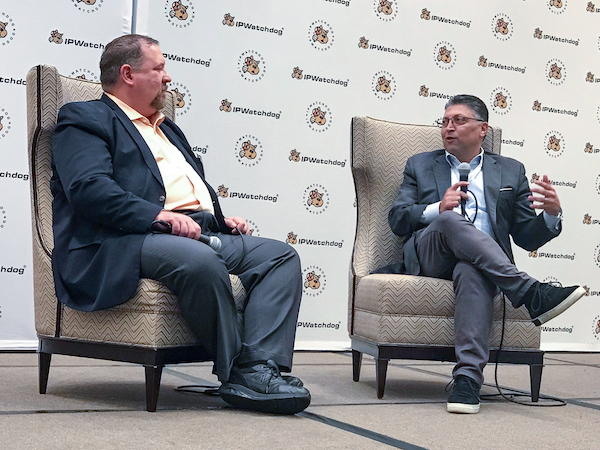 On day three of IPWatchdog LIVE in Dallas, Texas, former Assistant Attorney General in charge of the Antitrust Division at the U.S. Department of Justice (DOJ), Makan Delrahim, who is now a Member of the Board of the Directors at Osiris Acquisition Corporation and a Lecturer in Law at the University of Pennsylvania, told attendees of the event that it’s unfortunate that antitrust [and its interaction with intellectual property rights] has become a partisan issue when “it doesn’t need to be.” Delrahim recalled during a Luncheon Fireside Chat with IPWatchdog Founder and CEO Gene Quinn that, 20 years ago, when he was detailed to the Office of the U.S. Trade Representative (USTR), “the approach to strong IP was a unifying issue, and something that was not questioned, nor its value.” He added that he has become a bit discouraged by the “echo chamber” that has been created about IP to “devalue its actual impact on economics and on society”—particularly when our trading partners, like China, have realigned to recognize the value.

As a registered patent attorney, Delrahim had a unique perspective for a member of the DOJ Antitrust Division. In fact, he said he believes he was the first registered patent attorney to be in that role. During his tenure with the Division, he moved the policy of the federal government in a direction that was viewed as being more friendly to patent owners and innovators. For example, in December 2018, Delrahim indicated that the Antitrust Division was withdrawing its assent to the to the 2013 joint DOJ-U.S. Patent and Trademark Office Policy Statement on Remedies for Standards-Essential Patents Subject to Voluntary F/RAND Commitments (the 2013 Joint Policy Statement) during remarks delivered at the 19th Annual Berkeley-Stanford Advanced Patent Law Institute. It was Delrahim’s view that patent remedies shouldn’t be unilaterally unavailable for one category of patent simply because the patent owner may be subject to an obligation to engage in fair, reasonable and non-discriminatory (FRAND) negotiations with implementers.

Speaking to Quinn in Dallas, Delrahim explained that such decisions to revoke rights granted by Congress should not be made by antitrust regulators, and he was the first one to say so when he was given the chance. “It’s not up to antitrust laws and enforcers – if Congress wants to do that, they are perfectly capable…but it shouldn’t be up to the courts and it certainly shouldn’t be the role of antitrust enforcers to step in.”

Quinn noted that, while some have said Delrahim’s views on the intersection of antitrust and IP were just a brief “blip” and that his approach won’t survive, “every judge over the last several years has agreed with Makan.” Cases like FTC v. Qualcomm and others have further codified Delrahim’s views and prove that his tenure had a lasting effect. “His viewpoint has penetrated the thinking of judges in the United States and around the world, so the ‘New Madison’ approach will not simply fade away or become a speed bump or a blip,” Quinn added.

As for where we are today on reining in antitrust, Delrahim said, “I’m encouraged by the debate that’s going on in Congress, but I’m concerned about hostility toward IP.” However, Delrahim believes there is a “wide avenue” for positive change and that several senators, including Mike Lee (R-UT) and Amy Klobuchar (D-MN), have promising bills in the works that could make it, provided other factions don’t purposely block them. 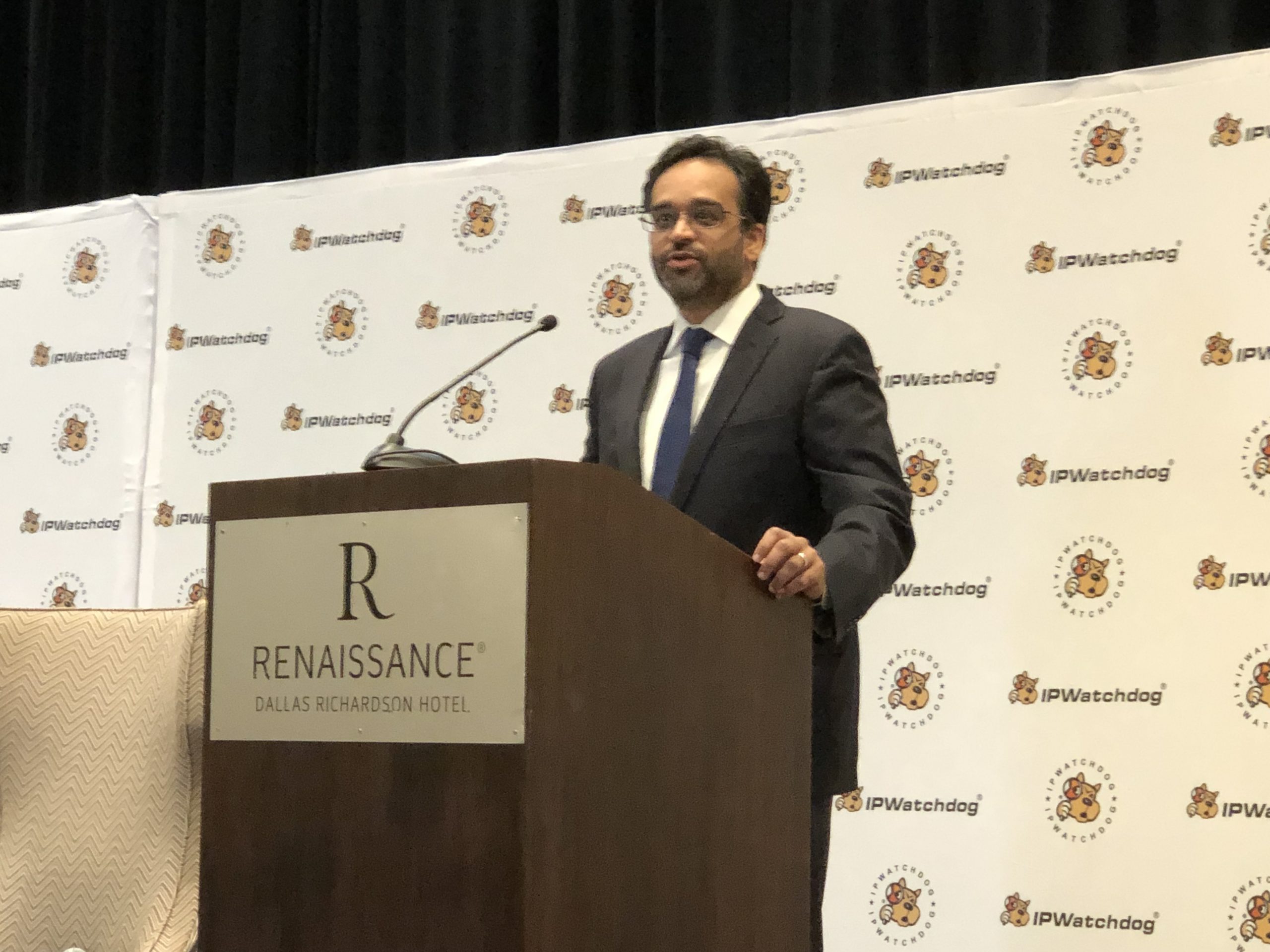 Day three also featured a breakfast keynote by Vishal Amin, Head of IP Policy at Intel Corporation, who was appointed the White House Intellectual Property Enforcement Coordinator (IPEC), or “IP Czar,” in 2017. Amin explained that he actually created this position in a draft Executive Order (EO) that he wrote up in the early 2000s but that then, “like all good ideas in Washington,” sat in his desk drawer for quite some time. Eventually that EO turned into the Prioritizing Resources and Organization for Intellectual Property (PRO-IP) Act of 2008, and eight years later Amin was tapped for the position, making him the first Asian American in history to head an Executive Office of the President component in the White House. “These are things that can only happen in America,” Amin said.

Amin also recounted his role in the passage of the America Invents Act (AIA), which celebrates its tenth anniversary tomorrow. On the day the bill was introduced, Amin walked it down to the House floor himself to get the bill number, H.R. 1249. “It was truly an exciting time getting that bill enacted,” he said.

As the bill was implemented over the subsequent years, and the courts became involved, it has become clear that there’s a need to ensure “that we follow the law and the Constitution,” Amin said. “As someone who has been uniquely involved with nearly every major IP bill to either get signed into law or move through Congress this century – I think that it is important that operations at the patent office be done fairly, in a way that properly tracks with Title 35 and the law,” he said.

That system must produce strong and reliable patents that “are clear in scope, properly enabled, give clear notice” and also be a system in which “issued patents bear strong resemblance to their initial application—and that means that when guideposts are established in law, for example with the operations of the PTAB, that they are genuinely followed. Folks may disagree with the law, they may not like it, but ultimately those are our rules of the road.”

Amin gave the example of the NHK-Fintiv rule created by the PTAB to discretionarily deny AIA proceedings. “This rule never went through proper notice and comment,” Amin said. “Over the past year, it’s shown to be a creative way to arbitrarily force the PTAB to deny meritorious cases that otherwise comport with the statutory requirements,” Amin said. However, he said he does not think the “ship has completely sailed on this one,” and that, ultimately, the true intentions of the law will be borne out.

The former IP Czar ended with two key points. First, despite the passion on both sides of the post-grant debate, and that some would rather issuance be the sole purview of the USPTO, and resolution the sole job of the Courts, “that’s not how our system operates,” he said. “When the stakes are high, as they are in the patent system, it’s important that the Office balance speed of issuance with the ability to have experts at the Office correct mistakes when they occur,” he said.

Secondly, he said, promoting innovation “is not somehow the sole domain of those operating within the litigation ecosystem. That’s not what makes American innovation run.”

IPWatchdog LIVE was a great success, with nearly 200 registered attendees, high-level sessions covering patent, trademark copyright and other issues, networking opportunities and receptions, and more. Over the coming days and weeks, we will publish additional coverage of some sessions and feature photos from key moments throughout the conference.