“The district court was wrong on a number of levels here, and it’s nice to see the Federal Circuit rein it in a bit.” 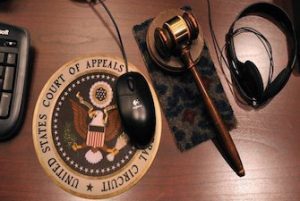 According to the Federal Circuit, the four patents at issue, all of which share the same specification, “generally relate to connecting a data capture device, e.g., a digital camera, to a mobile device so that a user can automatically publish content from the data capture device to a website.”

The district court dismissed Cellspin’s complaints against the accused infringers pursuant to Rule 12(b)(6) for failure to state a claim on which relief can be granted. It did so based on the U.S. Supreme Court’s two-step Alice framework for analyzing patent eligibility.

At Alice step one, the district court concluded that the asserted claims were directed to the abstract idea of “acquiring, transferring, and publishing data and multimedia content on one or more websites,” explaining that the asserted claims used “generic computer hardware and software components” to simply automate the conventional, manual process of transferring data from one device to another.

At Alice step two, the district court found that the asserted claims did not recite an “inventive concept” because the various claim elements like the camera and Bluetooth-enabled mobile device represent generic computer components performing “as expected according to their ordinary use.”

Notably, the district court also “acknowledged Cellspin’s argument that there was a factual dispute about whether the ‘combination’ of these elements was ‘well-understood, routine and conventional.’…But the district court concluded that it ‘need not reach the issue’ for two reasons…First, the district court distinguished Berkheimer because it arose ‘at the summary judgment stage, not in the context of a motion to dismiss.’…Second, the district court faulted Cellspin for not ‘identify[ing] any portion of the [’794 patent’s] specification’ that described the inventive concepts Cellspin alleged in its amended complaints.”

The district court also awarded attorney’s fees to the accused infringers on the basis of the case being “exceptional” under 35 U.S.C. § 285 since the asserted claims were “manifestly directed to an abstract idea” and that Cellspin’s claims were “exceptionally meritless” even though they did not amount to bad faith litigation.

In awarding attorney’s fees, the district court also criticized Cellspin for its “refusal to analyze its patents critically” before suing the accused infringers. The district court went so far as to say that Cellspin “could have litigated a test case but instead chose to file and pursue aggressively fourteen lawsuits simultaneously.” For its part, Cellspin argued that it did not need to file a test case because its patents were presumptively valid, but the district court somehow remarkably concluded that Cellspin’s patents “are not presumed eligible under Section 101.”

Conducting its own analysis, the Federal Circuit agreed with the district court that the claims were directed to an abstract idea but reversed anyway on the basis of the district court failing to conduct a proper Alice step two. This was because the district court ignored Cellspin’s factual allegations that, when properly accepted as true, precluded the grant of a 12(b)(6) motion to dismiss.

First, regarding Alice step one, to the surprise of no one on the patent bar, the Federal Circuit indicated that Alice did not establish any “precise contours” for defining whether claims are directed to “abstract ideas.” But the Federal Circuit also noted that it has held claims directed to improvements to computer technology to be patent-eligible.

Then, in conducting its own Alice step one, the Federal Circuit held that the asserted claims were drawn to the idea of “capturing and transmitting data from one device to another,” relying in part on apparently harmful statements made in the ‘794 patent that “the invention” generally “relates to distribution of multimedia content” and “[m]ore particularly…relates to pairing a digital data capture device in conjunction with a mobile device for automatically publishing data…on one or more websites simultaneously.” The Federal Circuit also based its conclusion at Alice step one on the fact that many of its previous cases held claims reciting the collection, transfer, and publishing of data to be directed to an abstract idea and that this therefore “compelled” a similar conclusion in the present instance. The Federal Circuit also noted that “the need to perform tasks automatically is not a unique technical problem” that would render the asserted claims non-abstract at Alice step one.

Then, at Alice step two, the Federal Circuit considered whether the claimed elements recited an inventive concept individually and as an ordered combination. In reversing the district court at this step, the Federal Circuit noted that “Cellspin’s allegations identify several ways in which its application of capturing, transferring, and publishing data was unconventional,” that Cellspin alleged its claims “provided various benefits over prior art systems,” and that Cellspin alleged that its specific ordered combination of elements was inventive. The Federal Circuit also indicated at one point that Cellspin actually provided evidence suggesting the techniques embodied in its claims had not been implemented elsewhere in a similar way.

The Federal Circuit then noted that “[t]he district court discounted these allegations in granting Appellees’ motions to dismiss because Cellspin ‘fail[ed] to cite to support in the [shared specification]’ for its allegations…In Aatrix, however, we repeatedly cited allegations in the complaint to conclude that the disputed claims were potentially inventive.”

The Federal Circuit then held that “[w]hile we do not read Aatrix to say that any allegation about inventiveness, wholly divorced from the claims or the specification, defeats a motion to dismiss, plausible and specific factual allegations that aspects of the claims are inventive are sufficient…As long as what makes the claims inventive is recited by the claims, the specification need not expressly list all the reasons why this claimed structure is unconventional. In this case, Cellspin made specific, plausible factual allegations about why aspects of its claimed inventions were not conventional, e.g., its two-step, two-device structure requiring a connection before data is transmitted. The district court erred by not accepting those allegations as true [emphasis added].”

Then, in terms of the second precedent that the district court misconstrued, the Federal Circuit observed that “[t]he district court also decided that it need not credit Cellspin’s allegations because the case Cellspin relied on for that proposition, Berkheimer, could be distinguished because it arose in the context of a motion for summary judgment…That conclusion is impossible to reconcile with Aatrix, where we expressly stated that ‘patentees who adequately allege their claims contain inventive concepts survive a §101 eligibility analysis under Rule 12(b)(6).’…The district court thus further erred by ignoring the principle, implicit in Berkheimer and explicit in Aatrix, that factual disputes about whether an aspect of the claims is inventive may preclude dismissal at the pleadings stage under § 101.”

The Federal Circuit thus concluded at Alice step two that, accepting the allegations stated by Cellspin as true, “we cannot conclude that the asserted claims lack an inventive concept” based on the “limited record” before it.

Additionally, in reversing the district court on the motions to dismiss, the Federal Circuit vacated the attorney’s fees award and made a few other observations “in the interests of judicial economy.” One of those observations involved the district court’s statement that Cellspin should have filed a “test case” before asserting its patents against all of the accused infringers.

Rejecting the district court on this point as well, the Federal Circuit thankfully indicated that “[P]atents granted by the Patent and Trademark Office are presumptively valid.” Thus, “To the extent the district court departed from this principle by concluding that issued patents are presumed valid but not presumed patent eligible, it was wrong to do so.”

(1) Indicating that according to Aatrix, “plausible and specific factual allegations that aspects of the claims are inventive are sufficient…As long as what makes the claims inventive is recited by the claims, the specification need not expressly list all the reasons why this claimed structure is unconventional.”

(2) Indicating that Berkheimer applies to motions to dismiss under Rule 12(b)(6) in addition to applying at the summary judgment stage in that “factual disputes about whether an aspect of the claims is inventive may preclude dismissal at the pleadings stage under § 101.”

(3) Indicating that the presumption of patent validity also extends to the issue of patent-eligibility.