“The question that remains for patent industry observers is whether the Federal Circuit will ultimately agree with what Director Iancu is doing in order to implement predictability.” 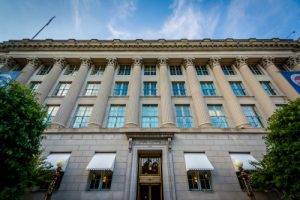 In 2018, however, the U.S. sank to twelfth place in the Chamber rankings relative to patent protections. In 2019, the U.S. rose to a tie for second place. This is certainly welcome news, but it is worth mentioning that the historic lead the U.S. had as the top patent jurisdiction in the world since the early 1980s has largely been forfeited over the last decade. Indeed, the U.S. patent score of 7.5 is only 0.25 points ahead of thirteenth-place Italy, and only .5 points ahead of both Hungary and Taiwan, which find themselves in a two-way tie for fourteenth-place. Singapore, which took first place in the Chamber patent category, came in with a patent score of 7.75. Thus, the top 15 patent jurisdictions in the world are tightly packed in these rankings.

Although the U.S. woes over the past decade are well documented, the twelfth place ranking last year for the United States took place before USPTO Director Andrei Iancu was sworn into office. Indeed, this month marks the first anniversary for Director Iancu. At the Chamber event celebrating the release of the IP Index, Director Iancu would joke during his remarks about the Chamber report making quite a nice anniversary present.

There is little doubt in the industry that the rise of the U.S. in the Chamber rankings was due to Director Iancu, or what patent industry professionals are already referring to as “the Iancu effect.” Without referring to it as the Iancu effect, Patrick Kilbride, Senior Vice President of GIPC, did acknowledge during a press call last Thursday that the U.S. rise in patent rankings was due to Director Iancu’s efforts to address predictability.

Before he delivered his remarks at the Chamber IP Index release event, I had the opportunity to briefly speak with Director Iancu on the record.

QUINN: So, Director, the U.S. Chamber of Commerce is out with the new IP report and the U.S. has raised its ranking. Many of us think, myself included, this is probably due to a lot of what you’ve done over the past year, and because there is a lot of optimism for the future. So, what do you have to say?  Are you pleased?

IANCU: Well, yes, first of all, I’m very pleased and I very much appreciate the fact that the Chamber has recognized the work that the PTO has done over the past 12 months to increase the reliability and predictability of IP rights.  I think we’ve made great progress on a variety of fronts and we have more work to do.  We have more work to do to further improve our systems and to further get folks to understand the importance of intellectual property for our economy and for the United States in general.  But, overall, I’m very pleased with the results this year and look forward to working with everybody and all the stakeholders to do even more.