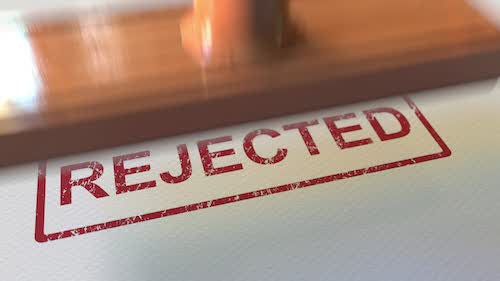 The frequency of any particular rejection type may be influenced by seminal Federal Circuit and Supreme Court cases. Judicial decisions are interpreted into policy decisions by the United States Patent Office (USPTO) and distributed to patent examiners in the form of examination guidance memoranda and other training materials. At least initially, major changes in jurisprudence are more likely to burden applications in the technological art analyzed by the court than applications in other arts as the USPTO will extend the courts analysis to those applications pending in that technological art. Yet, as the dust settles, the full impact of these decisions may be seen across all technology centers (TCs) of the USPTO.

A great example of a decision that materially affected the frequency of a particular rejection type was the 2014 Alice v. CLS Bank decision.[1] The Court in Alice reasoned that abstract ideas merely embodied on a generic computer are not eligible for patent protection.[2] Almost immediately after Alice, the USPTO began issuing new subject-matter eligibility rejections under the abstract-idea exception to the statutory categories of patent eligibility. The ubiquity of subject-matter eligibility rejections in office actions exploded, leading many to wonder whether software implemented inventions remained patentable at all.

This effect was largely centered in business method art units of TC 3600. For example, the number of allowances issued from business-method art units dropped from 24% in the months before Alice was decided to about 3% in months after.[3] Though more recent analysis identified an uptick in allowances in the business-method art units, the probability of receiving an allowance remained about four to five times lower when compared to the probabilities in other technology areas.[4] Many of the court decisions holding claims to be ineligible were from patents having been issued from these art units, so it is not particularly surprising that the USPTO focused immediate post-Alice training in these art units.

Examiners have not been the only obstacle to securing patents for business-method technologies. For example, we recently analyzed Patent Trial and Appeal Board (PTAB) ex parte appeal decisions having had Appeal Briefs filed after the Alice decision. We reviewed PTAB decisions from computer related technology centers, including TCs 2100, 2400, 2600 and the business method portion of TC 3600. Nearly all eligibility rejections at issue stemmed from the business-method art units[5], and a mere 7% of those appeals were successful (i.e. reversed).[6] Thus, the Alice decision had a significant impact on the applications from business method art units.

Our previous studies of regular prosecution and appeals suggested that Alice was rather inconsequential to patenting prospects for other computer-related technology areas. However, recent anecdotal accounts from practitioners suggest that eligibility rejections are becoming more common in the other TCs. Further, it appears as though the USPTO has increased training on Alice and eligibility assessments in the other TCs.

Thus, we collected new data to determine whether eligibility rejections have statistically increased in TC 2100, 2400 and 2600: Using LexisNexis® PatentAdvisorSM, we analyzed all office actions issued by the USPTO during each of the following time periods:

Specifically, for each office action, we tracked (using LexisNexis® PatentAdvisorSM data) the associated art unit and which types of rejections were issued. We separated the office actions by TC (further separating TC 3600 into the business-method art units (“BizMeth”) or other art units (“Other 3600”)) and by date of issuance. 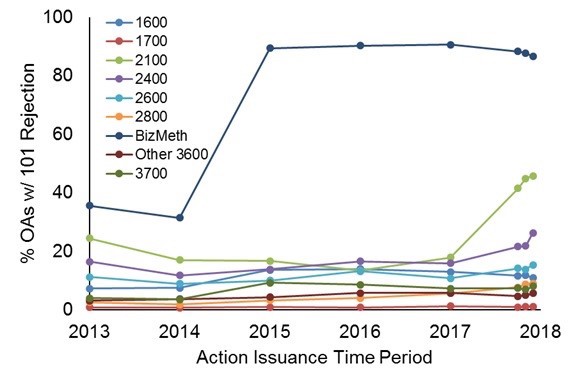 This data shows that the prevalence of eligibility rejections in non-business-method computer-related TCs (e.g., 2100, 2400, and 2600) has increased after Alice, though this increased prevalence is only associated with recent time periods. Across the first two weeks of 2014 (prior to the Alice decision), 12.3% of the office actions issued across TCs 2100, 2400 and 2600 included an eligibility rejection. Three years later, and about 2 ½ years after the Alice decision, the percentage notched higher to 14.6% by the beginning of 2017. But by October of 2017, the prevalence jumped to 25.0% (and was 29.3% by December of 2017). Thus, the prevalence of eligibility rejections doubled across 2017, while it had remained substantially constant for years after Alice.

The sudden increase in eligibility rejections from other computer-related technology centers may have a number of causes. For example, case law from the Federal Circuit and the USTPO began to expanded the application of Alice to inventions that appear abstract despite not being directed to a traditional business-method concept.  In the first few months after Alice, the USPTO trained examiners to identify abstract ideas based on a claim being similar to claims the courts had already found to be abstract.  Initially, the PTAB and Federal Circuit decisions analyzed few, if any, non-business-method patents under the Alice framework. Thus, having few, if any, cases for comparison, non-business-method art units found few applications abstract.  The recent increase may be due to the PTAB and Federal Circuit analyzing more applications and patents in the technological arts examined in TCs 2100, 2400, and 2600.[9]

Another possible cause for the increase in eligibility rejections may be the uneven training given to examiners. As the subject matter of Alice, as well the cases decided shortly thereafter by the PTAB and Federal Circuit, frequently corresponded to the subject matter examined by the business-method art units, the USPTO likely focused the initial eligibility training effort on business-method examiners. As the number of post-Alice PTAB and Federal Circuit eligibility expanded, so did the USPTO’s training efforts which used the extra case law to provide better guidance to examiners outside the business-method art units. Therefore, the recent surge in eligibility rejections from TCS 2100, 2400, and 2600 may be caused by the USPTO’s increased training efforts in these areas.

The increase in the percentage of office actions with eligibility rejections in TC 2100 was much higher than the increase in other computer related technology centers TC 2400 and TC 2600. Given that TC 2100 is a primarily software-focused technology center, this trend discrepancy suggests that post-Alice eligibility assessments performed by software examiners present increased challenges for patenting software based inventions.[10] In business-method art units, we have seen many applicants turn to appeal to address eligibility rejections that cannot be resolved with the examiner.[11] It remains to be seen whether the increase in eligibility rejections from the computer-related technology centers will trigger a similar increase in appeals in these technology centers. Thus, we may not yet be seeing the full effect of Alice on the patent prosecution landscape: it will be telling to track the prosecutions of applications that are now rejected under § 101 in TC 2100 (e.g., to determine an extent to which they are likely to become abandoned, to resort to an appeal, to receive additional office actions before an allowance, etc.).  In the meantime, in the words of the USPTO Director Andrei Iancu: “it is unclear what is patentable and what is not, and that can depress innovation”.[12]

[4] Kate Gaudry, “Is there a Tide-Change in the Prospects of Patenting Business Method Innovations?”, IPWatchDog, 2017, http://ipwatchdog.com/2017/05/25/prospects-patenting-business-method-innovations/id=83693/

[8] Kate Gaudry, “Is there a Tide-Change in the Prospects of Patenting Business Method Innovations?”, IPWatchDog, 2017, http://ipwatchdog.com/2017/05/25/prospects-patenting-business-method-innovations/id=83693/