Iancu: ‘It is unclear what is patentable and what is not, and that can depress innovation’ 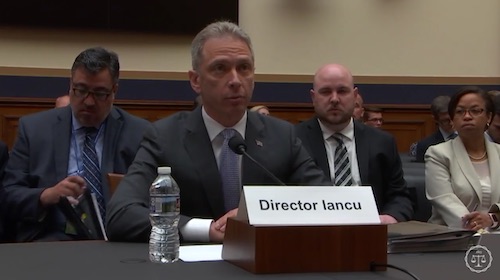 Earlier today USPTO Director Andrei Iancu testified at an Oversight Hearing before the House Judiciary Committee. In his prepared statement, Chairman Bob Goodlatte (R-VA) explained that the hearing would “investigate whether the PTO is implementing AIA post-grant review proceedings as Congress intended, to address patent litigation abuse, and whether it is doing so in a manner that is fair to patent owner and petitioner alike.”

At the outset of the hearing Chairman Goodlatte wasted little time, seemingly rather annoyed that the Office is undertaking reviews and changes to the post grant processes that have so fundamentally changed the patent landscape over the past six years. Goodlatte began by asking Director Iancu what changes the Office is likely to make to post grant proceedings in the coming months and why those changes are necessary.

After explaining the recent change announced to the claim construction process used during post grant proceedings make it consistent with that used in federal district courts, Director Iancu explained that the Office is looking at the amendment process “to increase the ability and to simply the process for amendment during the AIA trial process itself.”

“We are also looking at the actual hearing itself,” Iancu continued. “We have heard from stakeholders that perhaps there is not enough time in some of the proceedings at the hearing. Some folks have asked whether there can be testimony, witness testimony, at the hearing, or an increased opportunity for such testimony. There are pros and cons for those issues.” 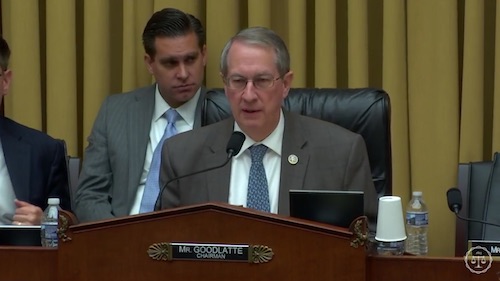 Chairman Goodlatte also asked Director Iancu about his views on the Supreme Court’s patent eligibility test and what, if anything, should be done to fix it.

“The Supreme Court’s framework from Alice is a two-step analysis that the courts and the Patent Office is implementing, and there is some confusion in the industry as to what some of the terminology means and what is patentable and what is not patentable,” Iancu explained. “So, thing such as what exactly is an abstract idea? What exactly does it mean to be ‘directed to’ – those specific words ‘direct to’ the abstract idea? What does it mean to be conventional, which is part of step two. And what we can try and do from the Office’s perspective, within that construct, is to try and provide better guidance for our examiners, and obviously the applicants who come before us as to some of those terms, as we did last month when we provided additional guidance as to the term conventional. What does it mean, and how should the examiners document it? That was an example of some of the things we can do, and we are looking at providing additional guidance on some of the other aspects.”

Later on, in the hearing, Congressman Doug Collins (R-GA), returned to the issue of patent eligibility, specifically raising the question about the impact current standards are having on life sciences. Collins again asked what Congress could be and should be doing, but this time also added a twist to the question, asking Director Iancu what would exceed the authority of the Office to do with respect to patent eligibility.

“The issue is very significant. It is significant to the Office, to our applicants, and it is significant to the entire industry,” Iancu responded to Congressman Collins. “In some areas of technology, it is unclear what is patentable and what is not, and that can depress innovation in those particular areas. Our plan at the PTO is to work within Supreme Court jurisprudence to try and provide better guidelines. What we think is in and what we think is out, and provide, hopefully, forward looking guidance that helps examiners and the public understand what at least from the PTO’s point of view we think is right.”

“Section 101, the code itself, has not been amended since 1952,” Iancu went on. “In fact, the language is by and large written by Thomas Jefferson in the early 1790s, with very little amendment ever since then. Obviously, we have developed some new technologies since then. So, if this Committee, or Congress in general, is interested in tackling Section 101, we would be very happy to work with the Committee on those issues. In the meantime, the PTO is going to do what we must do, which is help the examination process.”

Congressman Collins followed up and specifically asked Director Iancu to provide him with a list of what he feels would exceed the authority of the Office. Reading between the lines, and knowing that Collins is generally pro- intellectual property, it seems that he may be interested in amending Section 101. This would be particularly interesting if Republicans keep control of the House of Representatives in the 2018 mid-term election given that Collins would likely take control of the House IP Subcommittee.