Is there a Tide-Change in the Prospects of Patenting Business Method Innovations? 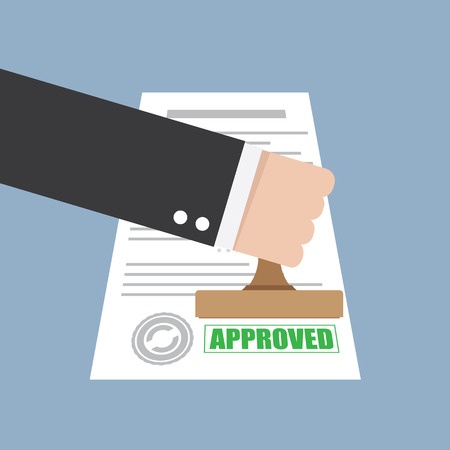 It is has been nearly three years since Alice Corp. v. CLS Bank has turned software patenting on its head. This decision has, in particular, wreaked havoc in the business method art units, where the statistical probability of securing a patent had been low (compared to other art units) even before the Supreme Court Alice decision. Afterwards, it was downright depressing: the probability that a PTO action was an allowance in these art units was in the low single digits – an order of magnitude lower than the probability in other art units. But, is the tide turning?

In the years after the Alice decision, it had seemed as though examiners in the business method art units felt as though their hands were tied with respect to issuing applications. Even if they had recommended an application for allowance, it was often sent back by quality review with an indication that a patent-eligibility rejection should be made or maintained. However, in early 2017 – at least with respect to a handful of applications – examiners’ perspectives seem to have changed, where they were more willing to work with the applicants to find eligible claim material and/or suitable arguments to be put on the record that would suffice for an allowance.

After experiencing and hearing about a number of these instances, we updated our data set from our earlier studies. Specifically, we requested data from the USPTO that would identify – for each quarter since Q4 2013, the number of allowances issued by each art unit in the quarter and the number of office actions issued by each art unit in the quarter. We grouped the data by Technology Center, though we sub-divided Technology Center 3600 into the business method art units (art units 3621-3629, 3681-3689 and 3691-3696) and other 3600 art units.

As expected, this data set similarly reflects our previously reported post-Alice plummeting of allowance prospects in the business method art units. However, we also observed a recent uptick in allowances in these art units. (See Figure 1.) The Q1 2017 portion of the PTO actions that were allowances was over 8.2%, as compared to 3.5% in Q1 2016. While the business method allowance prospects still remain substantially below those in other Technology Centers, the beyond-doubling of this statistic is of practical significance. 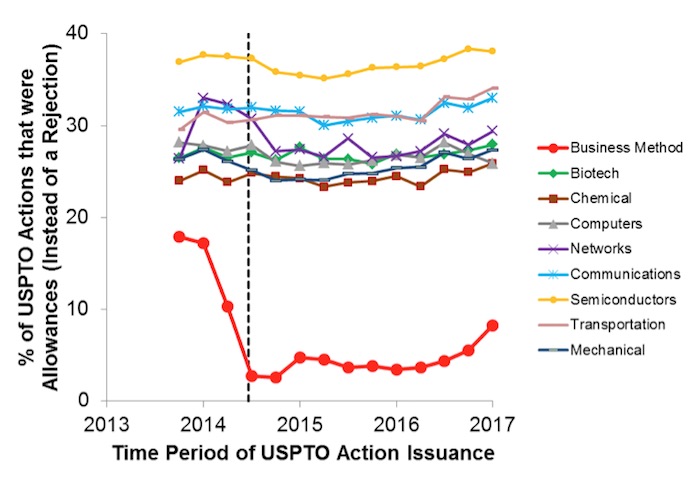 Why might this change have occurred? There are a number of potential explanations. For example, examination statistics may reflect review of applications filed post-Alice, which may have included specification detail and/or claim language tailored to address the current case law. Or perhaps case law has evolved to provide more avenues for applicants to argue (and/or amend) to arrive at a successful approach for addressing the Alice framework in the technology space. We believe that these are each likely contributing factors to the data.

However, beyond these, the change was aligned with a change in the Director for the majority of the business method art units. In approximately December of 2016, the position of the Director of the 3620s and 3680s art units was identified as vacant on the PTO’s Patent Technology Center Management page. (Business method art units include all of the 3620 and 3680 art units and 3691-3696.) In early 2017, the Director had been identified as Tariq Hafiz, who had previously been a Director of the 2620s, 2670s and 2690s in the Communications technology center. Thus, potentially, the new Director has influenced the process such that examiners are less dismissive of applicants’ subject matter eligibility.

Such a tide-change would be significant to applicants. Other data of ours indicates that applicants have been adapting their patenting strategies, such that there are substantially fewer (>25%) recent filings classified in the business method class (Class 705) as compared to the time periods pre-dating the Alice decision. (See Figure 2, which compares the number of filings in the business method class of 705 to other computer-related classes.) It remains an open question as to whether this decreased patent interest would translate into a decreased innovation/development interest. 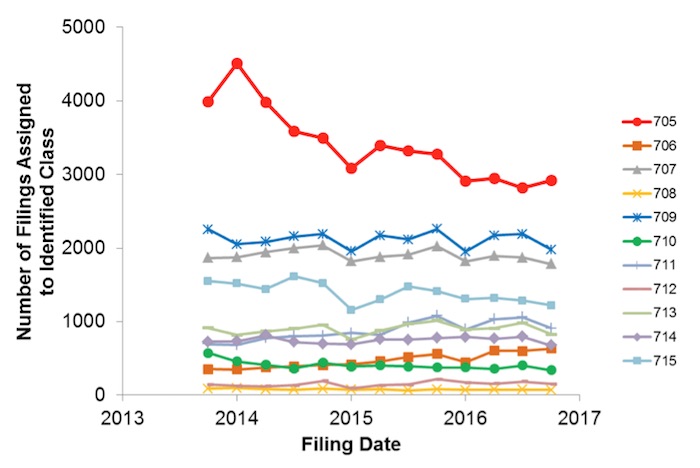 We recognize that business method patents have experienced substantial scrutiny by the courts in a trend away from “no-tech” patents and functional claiming. One approach to respond to these decisions is to shut the gates and to essentially indicate that innovations unfortunate enough to be classified as a ‘business method’ (which includes innovations related to medical software, cryptography, anti-counterfeiting, fraud detection and electronic voting) are no longer patentable. However, the current case law still acknowledges that claims directed to software are not inherently abstract and can make “non-abstract improvements to computer technology just as hardware can”. Enfish LLC v. Microsoft (at page 11). Thus, another approach is to regroup to identify how applicants may draft claims and arguments in important applications that demand patent protection in order to secure protection in these technological spaces. It seems as though the new Director may be influencing this change in perspective, which may be responsible for traversing the allowance standstill that had been observed in the business method art units.