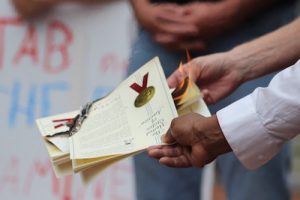 An inventor burns his patent at the USPTO protest. Photo by Julie Pixler.

Since the PTAB declared two of my Bunch O Balloons patents obvious in an institution decision earlier this year, I have visited with many lawmakers and officials to describe my ordeal: six (6) patents, one (1) notorious infringer, five (5) cases in district court, eight (8) appeals to the CAFC, four (4) preliminary injunctions, eight (8) PTAB petitions, four (4) trials instituted, and $18M in legal costs. This is just the beginning as we have not even gotten to trial yet.

There are two reactions that come from lawmakers and officials. The first reaction is from those that did not actively support the America Invents Act (AIA). They are appalled and incredulous that the PTAB is siding with infringers against the examiners and inventors. And they admit they are powerless because of both current patent legislation and the control of the U.S. Patent and Trademark Office (PTO) by interests much more powerful than inventors and voters.

The other reaction comes from those that created and supported the America Infringes Act. To their credit, they have begun to acknowledge the there have been some unintended consequences. But they quickly slip into the mantra that the PTAB is necessary to prevent trolls from asserting “bad patents” with frivolous lawsuits. Lawmakers and officials are now demanding that we inventors provide the data to prove that the PTAB is broken and that reforms will not result in trolls filing frivolous lawsuits with “bad patents.” Challenge accepted.

I ran a few simple queries in Docket Navigator. Readers can check it themselves by following the links below (account required):

The first thing that informed readers should do is throw out all of the statistics published by the PTO and Lex Machina that report the results of petitions instead of patents. As abused inventors from Zond know, with unlimited serial petitions it is useless to survive one petition if the next one is instituted and takes out the patent. Of the 4,637 patents challenged in the PTAB, 3,055 did not reach final decision and are therefore in limbo. They cannot be counted one way or the other. Of the 1,582 patents with a final written decision, 1,343 were found to have defects by the PTAB. That is an 85% defect rate. Only 239 patents were affirmed to be fully compliant with the statutes by the PTAB. Yet the Office of Patent Quality Assurance (OPQA) claims a 6-8% defect rate. This is consistent with my experience where the examiner cited all the prior art and initialed parallel PTAB trials as references, the OPQA and TC Director are signed off on allowance, the PTO Director signed my patents, and the PTAB is now overruling them – one after another.

Next issue – where are the trolls and the bad patents? Going back to 1987, Docket Navigator shows a mere 66 “bad patents” that were asserted, found invalid, and resulted in an award of attorney fees. Yet the PTAB has killed 1,343 and put another 3,051 into limbo. And what harm did those 66 bad patents do? The prevailing party was made whole. It does not make sense that bad patents could stymie innovation. Any party or attorney stupid enough to assert a bad patent is going to lose a lot of money. This is even more true now that 1) the Federal Trade Commission (FTC) and state legislatures have cracked down on demand letters; 2) federal rules have heightened pleading standards; 3) local rules have evolved to permit summary judgment early in cases; and 4) Octane Fitness gave judges discretion to award fees for exceptional cases. These 66 bad patents were never a threat to our innovation economy, and even if they were, they’ve been fixed without need of any help from the PTAB.

While additional patents have been held invalid by district courts (without incurring sanctions), they are not exceptionally bad and the cases were not frivolous. The economic costs of defending invalid patents are balanced by the costs of asserting valid patents. As for the allegation of nuisance settlements generated by asserting “bad patents,” that is pure speculation as they just as easily might be “great patents” or “okay patents.” If we are going to apply a data-driven approach to policy, we should stick with data, as I have done here, rather than pejorative and unsupported labeling of an uncontested patent as a “bad patent” using fake science.

In our meetings with representatives on Capitol Hill, we have turned the tables and asked that the lawmakers and apologists for the PTAB show us where the “bad patents” are. Instead, they have hearings in which witnesses from the likes of Mapbox complain about being sued for infringement of U.S. Patent No. 6510383 by inventor Martin Jones. The patent has never been found invalid, not even by the PTAB. It is not a bad patent. Not to mention the case was dismissed before Mapbox even had to file a single motion. At the same hearing, the witness from The Clearing House complained about “bad patents”, presumably referring to Leon Stambler’s U.S. Patent No. 5793302 which was never ruled on by a judge or jury. The PTAB invalidated it, but we have found they disagree with the examiners 100% of the time and courts 76% of the time. The House IP Subcommittee could just as well have my nemesis Telebrands testify that I am impeding their progress in knocking-off water toys by asserting my patents – patents which the PTAB invalidated against several PTO examiners and five Article III judges. As shown above 263 patents were found valid in full and fair trials in a court of law and also tried in the shortcut infringer-biased PTAB. Only 63 of them got the same results in both venues. The other 200 the PTAB came to a different conclusion. If the courts are correct then the PTAB is wrong 76% of the time.

That’s some data which should be pretty eye-opening to any PTAB apologists. How soon can it start driving some policy that restores our patent system? Or will the U.S. Supreme Court take it out of Congress’s hands and eliminate the PTAB in Oil States?