Does anyone at Mapbox understand the company’s patent filing activities? 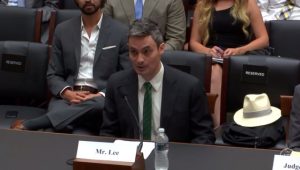 At the July 13th hearing of the House Judiciary Committee’s Subcommittee on Courts, Intellectual Property and the Internet, Mapbox staffer Tom Lee had some rather explosive things to say about patents. “In general, the quality of software patents in our system seems to be very poor,” Lee testified to efficient infringer ally, patent troll and House IP subcommittee chairman Rep. Darrell Issa (R-CA). Further, Lee assured members of the House IP subcommittee that he knew software engineers who would consider it “an embarrassment” to be listed as an inventor on a patent.

“At Mapbox, the desire to create better products drives innovation, not the prospect of patent protection. When we file patents, it is due to other considerations, including defensive ones,” Lee’s testimony reads. How come Lee can talk about Mapbox’s patent filing activities to Congress when he can’t do so on a public forum like Twitter? How can Lee be so knowledgeable of Mapbox’s defensive patent filing strategies if he can’t even discuss patent applications filings, material which is freely available to the public through searchable databases like FreePatentsOnline or Google Patents?

It doesn’t look like the confusion on Mapbox’s patent filing activities ends with Tom Lee, however. An e-mail chain we’ve obtained shows a discussion between Justin Cohen, the Thompson & Knight attorney who engaged Lee on Twitter, and two senior Mapbox officials: Leslie Nakajima, the head of global communications for Mapbox; and Sai Sriskandarajah, Mapbox’s VP of legal, who oversees all of Mapbox’s legal affairs worldwide. As the e-mail chain shows, Cohen took Lee’s advice to reach out to Mapbox’s communications department. Cohen asked for information on Mapbox’s patent grants and patent application filings, which should be publicly available information but appeared to be nonexistent to Cohen. “Can you explain why Mapbox is choosing not to disclose information about its patents and patent lawsuits? Which business reasons would be involved given that the information I’m asking about should be public?” Cohen asked Sriskandarajah in a July 20th e-mail; Cohen has received no reply to that e-mail. This follows an e-mail from Sriskandarajah from earlier that same day in which he said that “for business reasons we don’t disclose the information you’ve requested.” This matter was forwarded to Sriskandarajah on July 19th by Nakajima, who called Cohen “the same target coming after me that has been pinging Tom since his testimony.”

There could be a innocent reason why Mapbox doesn’t have any publicly disclosed patent application filings. It’s possible that the filings have been made within the past 18 months and have not yet been published by the U.S. Patent and Trademark Office. It’s also possible that they were filed with a non-publication request, so that the patent application wouldn’t be published until a patent grant is issued.

Still, given that Lee testified that Mapbox has been a party to multiple patent lawsuits and only a single lawsuit can be located, coupled with Lee’s testimony that Mapbox has used the patent system as an applicant and no patents or applications can be found, Congress should question whether or not false testimony has been given in this case. Perhaps there is a reasonable explanation, but based on publicly available information serious questions exist regarding the veracity of his testimony.

Further, Cohen went as far as to contact staffers with the House IP subcommittee to determine the criteria and process which goes into selecting panel witnesses for hearings on IP matters. “I first contacted Rep. Issa’s office, who referred me to the staffers on the House’s Subcommittee on Courts, Intellectual Property and the Internet,” Cohen said. “I spoke with a staffer named Joe Keeley, who did not provide many details. He merely stated that the chairman (Rep. Issa) makes the decision and the staffers looked for small businesses in the tech sector. I asked specifically how they decided on Tom Lee from Mapbox, but he did not provide any specifics. I’d like to ensure that Congress is relying on good, well-vetted information as they consider making additional adjustments to our patent system.”