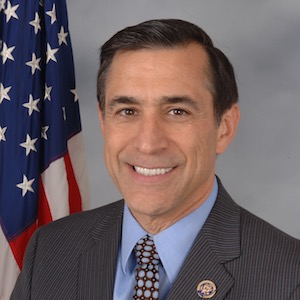 “Patent trolls, in my opinion, are the scourge of the patent world,” said Congressman Darrell Issa (R-CA) at a House IP subcommittee hearing on June 13, 2017. “We have time and time again attempted to stop patent trolls while in fact being objected to by genuine innovators who feel that they will be trampled in our effort to stop the worst of the worst.”

Issa represents California’s 49th Congressional district, including areas of San Diego and Orange Counties, in the U.S. House of Representatives. According to the bio on Issa’s House website, he served in the U.S. Army after graduating high school and went on to become the CEO of Directed Electronics, Inc., a company Issa founded in the mid-1990s which sold anti-theft devices for vehicles such as the Viper car alarm. Issa’s bio also notes that he has served as the chairman of the Consumer Electronics Association, today the Consumer Technology Association.

“As the holder of 37 patents himself, Issa has been vigilant about protecting the intellectual property rights of artists and other entrepreneurs to help protect America’s position at the forefront of innovation and creativity in the entertainment and technology industries,” Issa’s bio reads. According to Congressional blog TheHill, those 37 patents are the most patents held by a Congressional representative on record. (Not far behind Issa is Congressman Thomas Massie (R-KY), who holds 29 patents and has spoken recently about the ways that the current patent reform debate is weakening the U.S. patent system.) It should be no surprise that Issa’s business success, supported by the strength of his intellectual property, has led to great wealth for the Congressman; as of November 2015, Issa was reportedly the richest member of Congress with an estimated minimum net worth of $254.7 million, about $150 million more than the second-richest member of Congress at the time. Much of Issa’s fortune comes from his time as CEO of Directed Electronics, according to reports.

“For purposes of my opening statement, ‘plaintiff’ and ‘troll’ will be interchangeable.” – Congressman Darrell Issa, House IP subcommittee hearing dated 4/14/16

Given Issa’s history with patents and innovation, it would seem to make sense that he serves as the chairman of the House Subcommittee on Courts, Intellectual Property and the Internet, a subcommittee of the House Judiciary Committee. But Congressman Darrell Issa, while an inventor himself, seems to take a dim view of the private property rights of other patent owners. In a House IP subcommittee hearing on April 14th, 2016, Issa led off his comments by equating all plaintiffs in patent suits with patent trolls. More than a year later, Issa breaths more brimstone into the debate by calling trolls the “scourge of the patent world” in a June 13th, 2017, hearing of the House IP subcommittee, a hearing that included a panel witness who had very little business being there at all.

“Whoever came up with that phrase [patent troll] should get a special bonus because they manage to mischaracterize anyone who goes to court to assert patent rights as a troll… What I came to understand was one man’s patent troll was another man’s assertion of a patent right which they fought for and worked for for years which is now being infringed upon by some giant.” – Senator Dick Durbin (D-IL), Senate Judiciary Committee hearing dated 4/25/17

Between January 1st, 2000, and July 7th, 2017, Directed Electronics was a party to 40 patent infringement cases filed in U.S. district court involving intellectual property according to data analytics available through Lex Machina; most of those cases were filed in 2000, although one case has been filed as recently as 2015. Directed Electronics was listed as a plaintiff in 36 of those 40 filed cases. On 36 different occasions, many of which occurred during the year in which Issa was elected to the House of Representatives, the company that Issa founded operated in a way that easily qualifies it a “patent troll” by Issa’s own definition of the term. 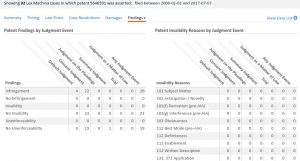 U.S. Patent No. 5646591, titled Advanced Method of Indicating Incoming Threat Level to an Electronically Secured Vehicle and Apparatus Therefor, lists Issa as the lead inventor and has been asserted in 32 cases filed in U.S. district court. In 26 of those cases, there were findings of patent infringement, with mo 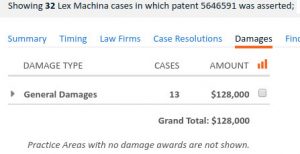 Only $128,000 collected from a combined 13 cases? That is less than $10,000 per case, which doesn’t even approach the nuisance value the truly bad actors, the true patent trolls that Issa himself and so many others rail against as extortion artists, seek to collect. Indeed, the FTC report on Patent Assertion Entities from October 2016 suggested that settlements of less than $300,000 suggested malicious and malevolent behavior that should raise suspicions of patent trolling. If that is true, what does this say about the ongoing enforcement campaign of Issa’s own patents? It would certainly seem that there are all the indicia of patent trolling that Issa so frequently enjoys pontificating about when he witnesses the behavior displayed by others.

A method of indicating a degree of incoming threat to an electronically secured area comprising the steps of:

a) sensing via a sensor means a degree of threat delivered to a secured area;

b) generating from the output of said means an electric signal proportional to said degree of threat;

This looks awful simplistic and very unlikely to survive any kind of serious scrutiny in the wake of the standard set by the U.S. Supreme Court in its 2014 Alice Corp. v. CLS Bank International decision. Therefore, it is extremely likely that if challenged this and the other claims would fall as have been improvidently granted by the patent examiner. That being the case, it seems that at least this Issa patent is quite dubious at best. Still, this dubious patent has been used nearly three dozen times as part of an ongoing enforcement campaign for nearly two decades. Yet another telltale sign of patent trolling, or at least so we are repeatedly told by Congressman Darrell Issa and others who share his beliefs.