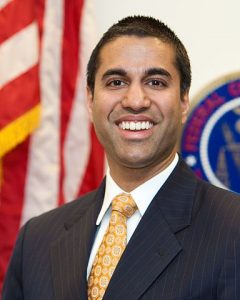 On Friday, February 24th, a statement released by the Federal Communications Commission (FCC) indicate that FCC Chairman Ajit Pai has moved to block broadband privacy rules drafted by the previous administration and set to go into effect in early March. The action also represents a changing point of view within FCC leadership which is interested in restoring the regulatory environment surrounding Internet service providers (ISPs) which existed prior to the FCC’s Open Internet Order issued in February 2015.

Part of the official statement from the FCC reads:

“All actors in the online space should be subject to the same rules, and the federal government shouldn’t favor one set of companies over another. Therefore, [Chairman Pai] has advocated returning to a technology-neutral privacy framework for the online world and harmonizing the FCC’s privacy rules for broadband providers with the [Federal Trade Commission]’s standards for others in the digital economy. Unfortunately, one of the previous administration’s privacy rules that is scheduled to take effect on March 2 is not consistent with the FTC’s privacy standards.”

The statement goes on to state that Pai is seeking FCC commissioners to cast votes prior to March 2nd that would stay the implementation of the broadband privacy rules adopted under previous FCC Chairman Tom Wheeler. If he cannot get commissioners to vote prior to March 2nd, the rules will be stayed through an action of the Wireless Competition Bureau.

FCC commissioners voted 3-2 last October to adopt broadband privacy rules which limit the amount of data which can be collected by ISPs from their consumers. The rules created an opt-in/opt-out model in which broadband customers must intentionally opt-in to any data collection programs developed by ISPs to collect data considered by the FCC to be sensitive, including geo-location, family size, browsing history or app usage history. Pai was one of two dissenting votes in last October’s decision on the broadband privacy rules, and his dissent reflected his views on harmonizing the FCC’s privacy regime with the FTC. “For the last two decades, the United States has embraced a technology-neutral framework for online privacy… It didn’t matter whether an edge provider or ISP obtained your data… The FTC’s unified approach [to data privacy] meant that you could rest assured knowing that a single and robust regulatory approach protected your online data,” Pai’s dissent reads.

Pai’s stance on this issue makes a great deal of sense. Much of the net neutrality debate has relied on the argument that Title II common carrier reclassification is necessary because ISPs are monopolies that need to be reined in. While ISPs do often have a regional monopoly in which customers in a given area may only have one choice for a broadband Internet provider, ISPs have much smaller subscriber bases than many of the Internet properties accessed by those subscribers, including Netflix Inc. (NASDAQ:NFLX) and Facebook Inc. (NASDAQ:FB) The regional monopolies which are sometimes enjoyed by ISPs are typically created by local municipal governments and their rules regarding public utilities and FCC orders on net neutrality haven’t addressed this issue at all. In addition, Facebook’s mobile advertising revenues have been increasing rapidly thanks in no small part to the ability to target advertising based on data collected from its users. If ISPs are common carriers because they are “engaged in interstate or foreign communication by wire or radio,” which is the definition of common carriers under current U.S. telecommunications law, how is Facebook, which engages in interstate and foreign communication over the Internet, not a Title II common carrier? As he seeks to continue leveling the playing field in telecommunications, it’s looking more likely like Pai will seek to return regulatory authority of ISPs back to the FTC.