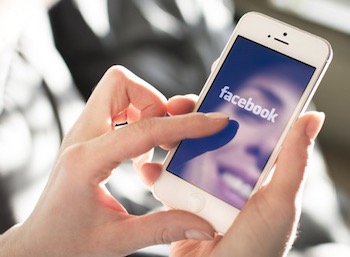 Facebook Inc. (NASDAQ:FB) of Menlo Park, CA, is a corporation that has successfully transitioned from the popularity of its original social networking service to become one of the world’s premier tech developers. At Facebook’s most recent F8 developer’s conference, CEO Mark Zuckerberg and other executives laid out a ten-year plan for expanding its social content sharing services to include virtual reality (VR) technologies; other corporate initiatives are aimed at global Internet connectivity especially targeting under served areas. Facebook’s stock prices have been picking up some healthy momentum after the corporation reported a stellar first quarter earnings report including beating forecast earnings per share (EPS) by 15 cents per share; Facebook ended up posting an EPS of 77 cents per share. 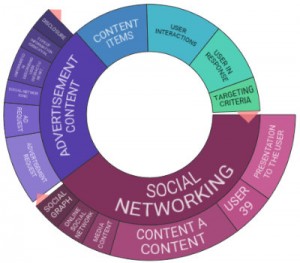 Facebook’s mobile advertising numbers were so good that its entire advertising revenue stream surged ahead 57 percent when compared with 2015’s first quarter, up from $3.31 billion to $5.2 billion. Advertising is the major chunk of Facebook’s revenues and the company’s $5.38 billion first quarter revenues were 50 percent greater than its revenues during 2015’s first quarter. It’s also interesting to note that Facebook has increased quarterly research and development expenditures to $1.34 billion in 2016’s first quarter, up from $1.06 billion during last year’s first quarter. Since the beginning of this year, Facebook has received 13 patent grants from the U.S. Patent and Trademark Office related to advertising; the company has also had another 32 patent applications related to ads published so far this year. A look at the text cluster, made available through Innography’s patent portfolio analysis tools, shows readers that Facebook is designing ad services incorporating social graphs, targeting criteria and media content.

In recent years, mobile platforms have been growing more important to the world of digital marketing. As of last July, U.S. digital media consumers spent 51 percent of their time accessing media through mobile platforms as compared to the 42 percent of time spent on desktop platforms, according to statistics collected by global executive network CMO Council. Digital marketing research firm eMarketer has forecasted that mobile advertising expenditures will increase from $10.67 billion in 2013 up to $65.87 billion in 2019, when mobile ad spending will contribute 72.2 percent of all digital ad spending. Facebook’s $5.2 billion in advertising revenues seems like a major jump, but this market clearly has even further room to grow in the next few years. 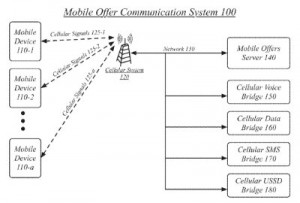 The targeted delivery of offers specifically on mobile platforms is definitely a focal area of R&D investment for Facebook, evidenced by its U.S. Patent Application No. 20160055537, titled Techniques to Target and Communicate Mobile Offers. It would protect a computer-implemented method of matching information stored about mobile device users with an offer, sending that offer to a mobile device and sending a purchase order to a cellular provider if the user accepts the offer. The method analyzes biographical information of users including age, gender and purchase history to target offers based on demographics like predicted income level or personal tastes. This patent application was initially filed by Israeli-based mobile analytics firm Onavo, which was purchased by Facebook in October 2013 for an undisclosed amount reportedly reaching $200 million.

Facebook’s advertising services arsenal saw an important addition during the first quarter when it launched Canvas in February. Designed specifically for mobile platforms, Canvas offers faster advertisement loading times and doesn’t require marketers to have coding skills to build interactive ads experiences. Major corporate partners who are already using Canvas include Carnival (NYSE:CCL), Macy’s (NYSE:M) and Wendy’s (NASDAQ:WEN), but the service is free to use and could be a boon to small businesses advertising on Facebook’s mobile platforms as well. Advertisements built through Canvas can incorporate a wide range of interactive components including full-screen images, logo headers, text blocks, offsite links, image carousels, full-screen tilt-to-pan images, auto-play video and product sets which can be configured in any arrangement. 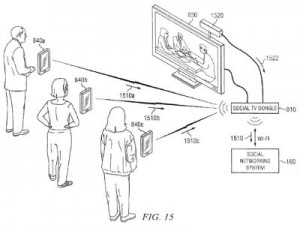 Enhancing the information provided during viewing experiences for digital media, including advertisements, would be added to Facebook’s IP portfolio if they’re issued a patent grant after filing U.S. Patent Application No. 20160007096, titled Sharing Television and Video Programming Through Social Networking. The method claimed here involves identifying products provided on a display, such as a mobile device display, by accessing a product database and comparing known products in order to display additional content with the displayed products. The product identification method can involve techniques like optical character recognition (OCR), logo scraping or closed-captioning info capture. Diagrams attached to the patent application indicate that this system would primarily be used to inform people about the television programming being watched by social contacts, but the technology’s ability to create “advertisements of increased relevance” which are “more likely to result in a purchase” is also discussed.

Even as Facebook moves forward with mobile ads, it is stepping back to take a page out of advertising pricing strategies used in the world of broadcast television. In late April, Facebook announced that target rating point video buys on both the flagship social network as well as Instagram would begin incorporating day-parting and Nielsen Designated Market Area (DMA) targeting. Now, marketers using video ads will be able to use DMA targeting to focus on specific local television markets and day-parting to deliver ads at specific times of the day. Interestingly, this comes three months after the U.S.-based global information and measurement company Nielsen (NYSE:NLSN) announced that it would be incorporating Facebook and Instagram interactions into a new ratings metric that will become known as Social Content Ratings. 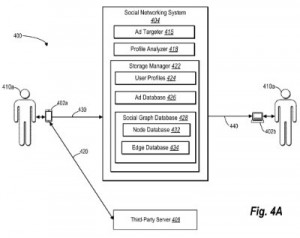 Businesses will get even more tools for tracking their audience on social media with the innovation filed by Facebook in U.S. Patent Application No. 20160048880, titled Expanded Tracking and Advertising Targeting of Social Networking Users. The method it would protect involves collecting social network user activity to augment a profile of the user maintained by the social network. These augmented user profiles allow an advertisement system analyze information and identify opportunities for cross-device marketing, remarketing and other targeted advertising techniques. This invention is designed to give merchants operating on social media further insights as to how the company’s social media audience is interacting with its content.

As Facebook’s mobile advertising revenues grow, it’s becoming easy to see how the company is seeking to do big business with small and mid-sized businesses. Facebook executives noted how the company’s Messenger chatbots, announced at the recent F8 developers conference, would be especially helpful to businesses who want to engage customers. After Facebook’s first quarter earnings report was released, chief operating officer (COO) Sheryl Sandberg called small and mid-sized businesses a “core competitive advantage” for Facebook because of the company’s ability to reach such a wide audience without the cumbersome technical requirements of other digital marketing campaign systems. Facebook’s business page and marketing campaign services pair well with analytics tools like Facebook Pixel, which provides information on ad conversion rates, Page Insights, which tracks user activity on Facebook pages, and Ad Manager, which can further analyze the success of individual ads.