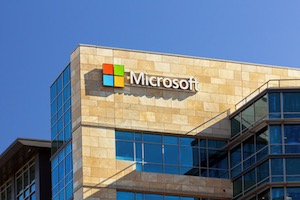 America’s “Big 5” tech companies have been chugging forward with patenting activities in recent years, according to mid-December reports of data released from venture capital resource firm CB Insights. This data suggests that since 2009, a total of 52,000 patent applications have been filed by a collection of five tech giants: Alphabet Inc. (NASDAQ:GOOGL) subsidiary Google; Apple Inc. (NASDAQ:AAPL); Facebook, Inc. (NASDAQ:FB); Amazon.com (NASDAQ:AMZN); and Microsoft Corp. (NASDAQ:MSFT). The report sheds a little bit of light on the tech sectors where each of these major tech companies are trying to stake their claims.

In terms of sheer numbers, in the CB Insights study, which curiously did not include patent giant and American research juggernaut IBM, Microsoft ranks supreme among this collection of five major tech firms. The Redmond, WA-based hardware and software developer has applied for a total of 16,840 patents over the seven years of the study. In second place is Google with 14,596 patent applications over the same time period. Although exact numbers for the other three firms weren’t publicly released by CB Insights, these two firms are followed by Apple (13,420 patent applications), Amazon (5,186) and Facebook (2,508), respectively.

It deserves further mention that this particular collection of Big 5 tech companies would be quite different had CB Insights included IBM. It is indeed hard to understand how CB Insights could leave off patenting giant IBM (NYSE:IBM), the major tech company that has earned the most U.S. patents each year for the past 23 years. In any event, these numbers on patents filed by American high tech firms and the growth identified would have been much higher in a different study that included the obvious leader of the pack — IBM. For example, in 2015 alone IBM received 7,355 patents, which dwarfs the number of patent applications even filed by Amazon and Facebook since 2009.

Artificial intelligence (AI) technologies are one sector of research and development where the CB Insights study compares the patenting activities of these Big 5. These innovations will enable cognitive functions in machines and impact a wide range of industries in the years to come, including agriculture, healthcare, retail, manufacturing and transportation. Global market research firm MarketsandMarkets forecasts that the global AI market will reach $16.06 billion USD by the year 2022, growing at a compound annual growth rate (CAGR) of 62.9 percent between 2016 and 2022. American market intelligence firm Tractica recently released an market taxonomy of 27 industry sectors featuring potential AI use-cases and forecast that global AI revenue would grow from $643.7 million in 2016 up to $38.8 billion in 2025. Natural language processing, deep learning and other AI tech will be incredibly valuable for their ability to support new business models according to the above analysis.

As the recent CB Insights report suggests, vehicle technologies have been an area of greater R&D investment among members of tech’s Big 5 in recent years. Google has been identified in the past as being particularly invested in this sector and the recent Big 5 report reflects this, placing Google at the top of the list among the tech companies surveyed; CB Insights identified 365 vehicle patent applications filed by the firm. Google has a sizable lead over rival firm Apple (65 patent applications), which in turn is followed by Microsoft (63) and then Amazon (32). No Facebook patent applications were identified in this field.

Despite the focus on Silicon Valley’s contributions to recent development in automotive technologies, their impact on this sector will probably be more limited in scope. None of the Big 5 identified by CB Insights comes up in the top 20 organizations filing vehicle-related patent applications since the beginning of 2009, according to Innography. As this pie chart shows, the sector is dominated by usual suspects like Toyota (NYSE:TM), Ford (NYSE:F) and General Motors (NYSE:GM). The only American tech firm that shows up in the top 20 is General Electric (NYSE:GE), which has filed just under 2 percent of U.S. patent applications for vehicle technologies since the beginning of 2009. Technological developments in on-demand mobility services and data-driven services could potentially create additional revenues in the automotive industry of $1.5 trillion according to data released by global consulting firm McKinsey & Company.

Finally, the CB Insights report on the patent application filing activities of the Big 5 looks at the twin sectors of virtual reality (VR) and augmented reality (AR). Both of these industries are set to see major increases in the size of their markets in the coming years. Brand consulting firm Deloitte indicated that the VR industry was set to hit $1 billion by the end of 2016, with $700 million of that total coming from the sale of hardware devices and much of the commercial focus on video games and entertainment products. According to a summary of a Business Insider market report, the combined market for VR and AR tech could hit $162 billion by 2020. Augmented realities will likely provide the vast majority of these revenues. A May 2016 report from MarketsandMarkets forecasts the global AR market to grow at an annual CAGR of 75.72 percent through 2022, when that market is predicted to reach $117.4 billion USD. Over the same period, VR tech is expected to grow at a CAGR of 57.84 percent to reach $33.9 billion by 2022. 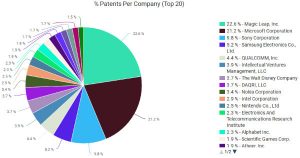 Microsoft, which has been heralding the development of its HoloLens VR platform and Kindle AR tech in recent years, takes the lead position in this field with 141 VR/AR patent applications, followed by Google (45), Amazon (33) and then Apple (12). Again, no Facebook patent applications were identified in this field. A fuller view of the VR/AR market provided by Innography shows Microsoft being outpaced slightly by Florida-based mixed reality developer Magic Leap, Inc. Near the top of the list and trailing Microsoft closely are Sony Corp. (NYSE:SNE), Samsung Electronics (KRX:005930) and Qualcomm, Inc. (NASDAQ:QCOM).

The full report itself goes on to describe the technologies covered by patent application portfolios held by each of the Big 5 included in the report. As a full snapshot of the patenting activities of major American tech firms, the recent CB Insights study leaves a bit to be desired, mostly due to the absence of important tech players like IBM and GE. It does, however, provide an interesting look into the R&D focus for a handful of America’s most recognizable tech companies.